The Request and The Order 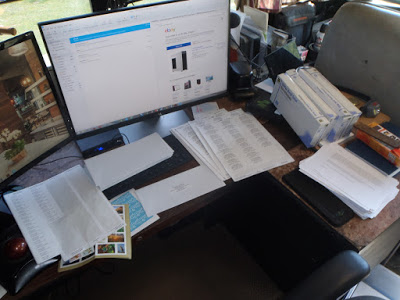 Letters
I have been busy with letters recently. In response to my
latest blog I had a sister in Christ from the state of Wisconsin write me and
say that she would be glad to create the labels I needed to send the letters
off to the men in prison. I received the package Wednesday, along with the
created letters, and spent about 6 hours affixing labels to envelopes and
stuffing them with letters. They are now in the mail. The men should be able to
quit worrying about where their Newsletters are now. The last Newsletter they
received was printed out on 1/28/2017, approximately 6 weeks ago. 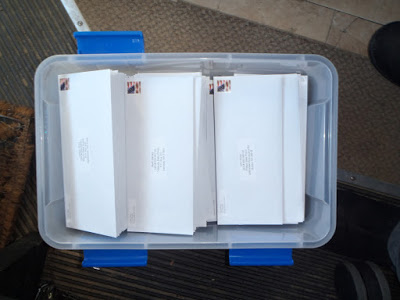 It’s hard to tell, looking straight down on the letters,
exactly how many there are, but there are 280 of them. The number does not
sound that extreme, but it is a lot of Newsletters to send to men in prison.
After I figured out what was wrong with my computer, and I
knew I was going to have to replace it, I have spent a number of weeks saving
up whatever cash came in to be able to purchase another one. I was able to
order a computer and it is coming in next week. After that it will take me some
time to be able to get the new computer loaded with all of the software I use
and get some Newsletters printed on it. I figure by the end of this month I
will be back in business. I may wait until then to work on the Scriptures that
I am translating for they have bogged down also when I attempted to do a large
search and replace. I attempted to do a search function on Exodus through
Malachi, so that I would not have to do a separate search on names in each
book, and the computer bombed out on me, repeatedly. I cannot change names in
the Old Testament unless I do it one book at a time, and that would take too
long. There are dozens of names I need to change, and with 39 books that would
take a long time and I would be prone to missing some of them.
I looked at computers, and was surprised to see that AMD had
just released a new processor about a week ago. The Ryzen processor was a good
deal, but it is encountering some problems in getting it to run at full steam
with certain Microsoft programs and using non-AMD graphics cards. I decided not
to take the chance on a Ryzen card (you would have to use one of their approved
motherboards, and there aren’t too many of them out), and I ordered an Intel
processor instead. 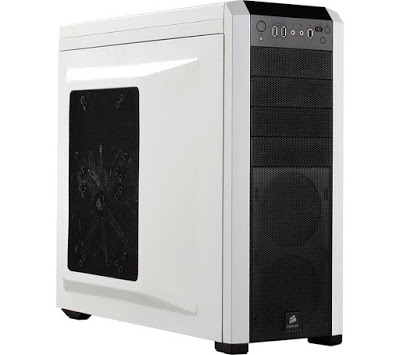 I ordered the system from Adamant Computers. They have been
in service for ten years and have a 100% review based on more than 2200 entries
on Ebay. The system I ordered has 4 expansion slots, which should be more than enough
to handle the Soundblaster sound card and the Nvidia graphics card I am going
to take out of my existing system to save some money. I am also going to re-use
my 960 GB SSD drive. I had the 480 GB Kingston M.2 card installed. I have never
had one of these before, but they are rated faster than the standard SSD drive.
I had to have this installed to have Windows 10 preloaded at Adamant Computer.
Interestingly, Microsoft just announced that they will no longer support
Windows 7 or Windows 8.1.
The system has a Corsair case, Thermaltake 750 Watt power
supply, ASUS motherboard, Intel i7-6900K Broadwell-E 8 core running at 3.2 GHz,
and a Corsair High Performance Hydro water cooler to keep it cool. The
Broadwell-E 8 core processor is what makes this PC go, and it isn’t Intel’s
newest processor. The 6950 10 core is newer, but it is also $600 dollars more.
The 6900 is $1,000, which I will need to keep my system running for at least
the next 5-7 years. The computer also comes with 64 GB of RAM and is upgradable
to 128 GB.
Some people may think this computer is too fast, but in 5
years these stats will seem rather tame. I paid $2,866 dollars for the PC, not
counting the upgrades I have for it in my present system. With the programs I
already have the system should easily carry the load. Excel should be no
problem. I also have Xara Web Designer, Audacity, Camtasia Studio 8, Adobe
Premiere, Corel Paintshop Pro ver. 18, and numerous other programs, some of
which have been too slow to run on my current system.

I sincerely want to thank those of you who have given freely
to make purchasing this PC happen, and I thank the sister in Wisconsin for
printing the labels for me. Your gifts are being used with much appreciation.