The Solar Eclipse, the Hurricane, and Egypt 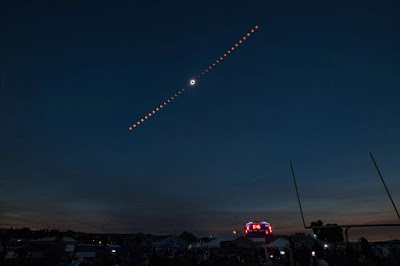 The solar eclipse this past week was a rarity. It crossed the entire scope of America, and it did not cross any other country. It also was 99 (3 x 33) years since the last total solar eclipse that was seen in America, an eclipse that followed nearly the same path. I made mention of the eclipse’s notoriety as a Freemasonic emblem of woe. The Masons have 33 degrees and 3 indicates finality. The greatest extent of the eclipse was over Little Egypt, a portion of Southern Illinois named by Freemasons. We looked at various Egyptian names and symbols such as the pyramids and obelisks that were in or near its course. Carbondale, Illinois was near the center of the eclipse path and we mentioned a University there that has much Egyptian heritage. The newspaper for Southern Illinois University is the Daily Egyptian. The mascot is the Saluki, an Egyptian dog. There are pyramids and obelisks in the area, and many more symbolic names and emblems from Egypt.

We mentioned that a solar eclipse has been known to the Jews as a solemn sign for the nations. It is an extinguishing of the light of day. It can stand for something very terrible, and often does in the Bible.

Isaiah 13:9-10
Behold, the day of Yahweh comes, cruel, with both wrath and fierce anger, to lay the land desolate; and He will destroy its sinners from it. For the stars of heaven and their constellations will not give their light; the sun will be darkened in its going forth, and the moon will not cause its light to shine.


On the reverse, the Sun giving more light is a symbol of grace and favor.

That we observed an ominous sign is true. The people of America should be worried. Instead they have already forgotten the eclipse. Some pastors are saying it was nothing. Despite America bearing the name Little Babylon in these last days, she thinks she has nothing to worry about. The nation that has given the world homosexuality, pornography, and abortion and which continuously lies to and deceives its people about everything (going to the moon 48 years ago, and all the lies about political people and policies) indeed it has very much to be worried about.

Is it not obvious that something is happening at this time when we are told by the Weather channel that it has been 12 years since America has been struck by a major hurricane? Hurricane Wilma was the last major hurricane to strike America, and that was in 2005.

What does Hurricane Harvey have to do with the solar eclipse of the same week? Corpus Christi also has many Egyptian names associated with it. Consider the following street names.

There are also some businesses in town that bear Egyptian names. 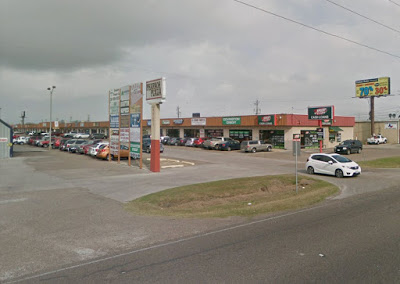 
You may ask, “What makes me think that Yahweh speaks through such events as these?” There was a time a number of years back when Yahweh spoke to me through a city name and a tropical storm. I have no doubt that Yahweh was speaking a deliberate word to me. The city was Corpus Christi and the storm was called Grace. Following is an excerpt from the book Evidence of Things Unseen.
Texas braces for wind, rain as Grace nears

(CNN) –As Tropical Storm Grace moved steadily closer to the Texas Gulf Coast, Hurricane Fabian churned far east of the Caribbean, the National Hurricane Center in Miami, Florida, said Sunday.
At 5 a.m. EDT, Grace was about 115 miles southeast of Corpus Christi, Texas, and moving to the northwest near 14 mph, forecasters said. That motion would bring the storm’s center across the Texas coast sometime Sunday. Strong winds and rain from the storm have fallen over East Texas and southern Louisiana, forecasters said. They predicted rainfall accumulations of 6-8 inches in those areas, with higher amounts in some places. A tropical storm warning remained in effect for the Texas coast from High Island to Corpus Christi.


The statements in this article were too incredible to be mere coincidence. The time given for this tropical storm update was 5 AM, five being the number of grace. Grace was 115 miles from Corpus Christi, 115 being 23 times 5, 23 signifying God’s provision as in the 23rd Psalm “The Lord is my Shepherd, I shall not want,” and five once more being the number of grace. God was stating through this that His grace was being loosed in the area of provision. But the clincher is that it said Grace was heading toward Corpus Christi, which is Latin for “the Body of Christ.” I was in awe of what I read, and I knew Yahweh had set this sign before me for my encouragement.
[End Excerpt]

This happened in 2003. I remember it clearly. I needed to move and Yahweh was taking me to a place where I would have five months of grace to spend with my family. Can you remember something Yahweh spoke to you 14 years after it was uttered?

Yahweh does speak through such things. Another sign is coming to America right now. Do you see it? Can you hear what the Father is saying? If a solar eclipse is a sign for a nation, then a hurricane is a sign as well. Watch well. I believe this will be a storm to remember.