Note: I am re-posting this blog as it was put up too late last night to be sent out by FeedBurner. Feedburner is date sensitive, so I am putting it up again to insure it will be sent to the blogs subscribers tonight.

As I sit here at my computer, it is Wednesday evening at 7:20 P.M.. U.P.S. just arrived to deliver four cans of spray paint that I will use for the remaining windows I will be painting. After some research I came across some transparent black paint that can be used for window tinting. The paint is called “Mystic Black Transparent Paint” and is manufactured by Montana Gold. I found it at an online art supply store (Dick Blick). I thought that it must surely be easier to spray tint on windows than to apply tint film, so I searched online until I found this product.

I am keeping about three quarters of the windows uncovered and functional. Some at the rear of the bus will be sealed up behind walls. I have already painted them solid black, as well as the windows on the back door, as the bathroom is behind the door. 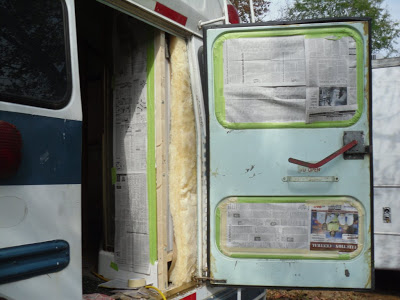 I have been somewhat driven by necessity in determining the order of work to be completed on the bus. I had to paint the rear windows before insulating the bathroom and installing paneling. I also had to build a frame for the shower in order to anchor it in place. Following is a picture of the rear door after painting. 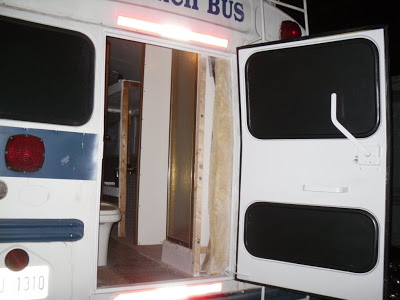 I like the contrast between the black and white on the doors and walls. I purchased white paneling to go inside the bus. This will be offset by grey ceilings and the black windows. I am sure there is some symbolism in keeping things black and white.

At times it seems one has to make a mess in order to make progress. Following is a series of photos portraying progress inside. 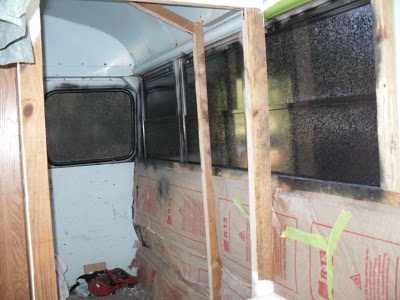 These windows painted black will be in the bathroom, or behind walls. 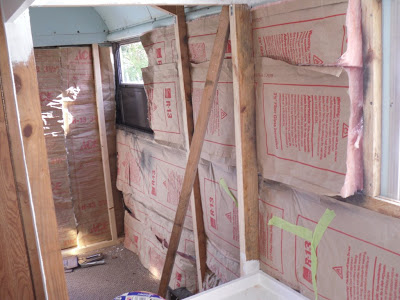 One has to have a vision of what will be as they are laboring. It is hard to see a livable home as one looks at the picture above. But a short while later it looked like the following: 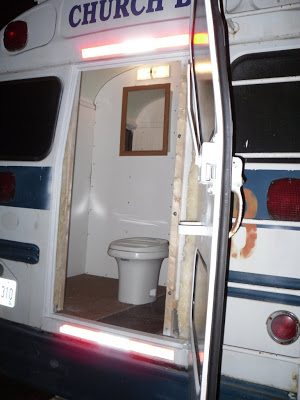 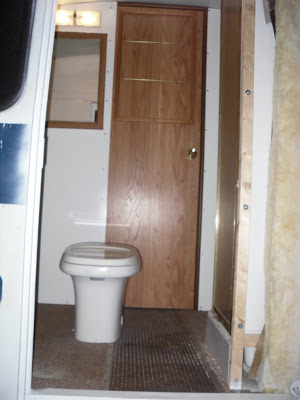 I still have to cover the back corner of the shower which is visible at the right.

I have put in some long days of late, sensing that the Father would have me to complete this labor as soon as possible. The Father has been affirming this is to be a quick work by continuing to supply all that I need to get the conversion completed. I had mentioned in a previous post that I was planning on installing a wood stove up front. A couple days ago a man called me and told me about a used one a neighbor had for sale for $40. It was just the size I desired. It will need sanding and painting, but the price was very good.

I have corresponded with a couple brothers about wiring, and I think I have a pretty good handle on how to get everything wired. I salvaged an electrical distribution box from a brother’s RV in Tennessee. It was just what I needed. 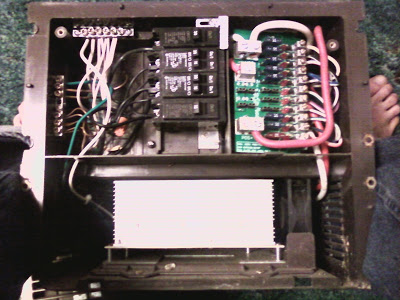 When I am plugged into shore power (110 AC) it will feed into the upper left of the distribution box. The breakers will control the 110 AC appliances and outlets in the bus. AC power then runs to the bottom of the box where a rectifier converts the alternating current to direct current (DC). The 12 volt DC current is then fed to the upper right of the box where a panel of fuses controls the distribution to all the DC circuits in the bus. Lights and fans will be the main things served by DC current. The DC current also feeds out to charge the auxiliary batteries.

I went this morning and purchased two of the least expensive car batteries I could find. I will be putting these in my van so I can take the two AGM batteries, which are much more expensive, and put them into the bus to use as my auxiliary power supply.

I have already run some of the wires, as they must be run before paneling is put on. Today I also cut about a six inch square hole through the side of the bus to mount the access for the 30 amp power cord. I am impressed by the thickness of the steel they used in the construction of the bus – two layers of it. 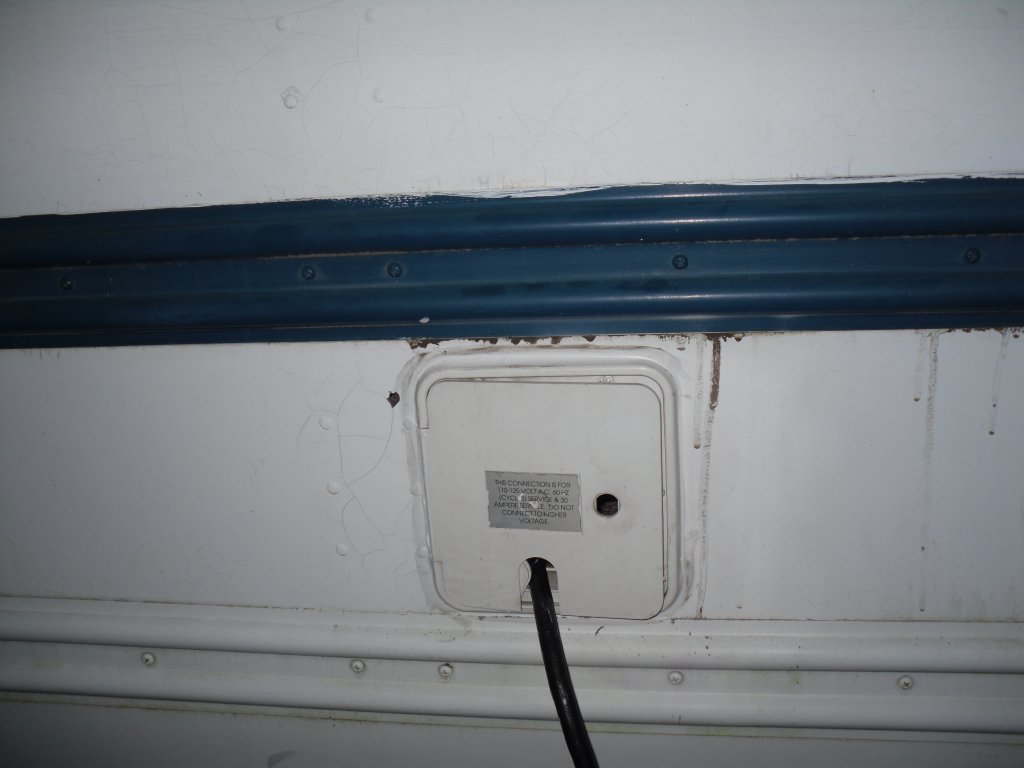 On a related note, even those who do not have the Spirit of Christ are discerning that things are rapidly declining in America. I was sent a link to the following video by several people. I watched it last night, and found it a very informative look at the rapid loss of liberty in this nation. Dire things are surely coming.

Things are moving along quickly in more ways than one. The ark I am working on is progressing quickly, and things are deteriorating quickly in the nations. Let all be led by the Spirit. The hour is late.