A Time to be Sober 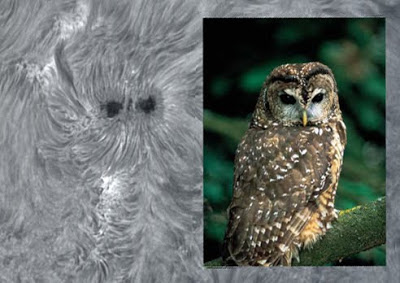 In response to the last posting that mentioned the sign given of an owl sitting atop the American flag, some readers informed me of a recent phenomena occurring in the Sun. The picture above was taken the day after Randy had his encounter with the Native American woman in Sheridan, Wyoming. You can read about this remarkable sunspot here:

Yahshua was questioned by His disciples concerning when His return would occur. He replied:

Luke 21:25-26
“And there will be signs in sun and moon and stars and upon the earth, dismay among nations in perplexity at the roaring of the sea and the waves, men fainting from fear and the expectation of the things which are coming upon the world…”

This sign in the Sun is much broader than the sign of the owl sitting atop a flagpole flying the American flag. It would indicate that a time of destruction and woe is coming to the entire earth. The Spirit has recently been speaking very sober things at the meetings we have been holding across the country. I want to share one very profound message from the Father that occurred at the recent meetings in Kooskia, Idaho.

Randy and I arrived early at the Fowler’s ranch and spent a week in their guest house. During that week, Nancy Fowler showed us her seven horses. Randy likes horses very much, and was eager to ride one when given the chance. Nancy had a beautiful male horse named Cocoa. Cocoa was a magnificent horse and, although he was 26 years old, he looked like a much younger horse. During the week we were visiting, Randy was able to ride Cocoa several times. 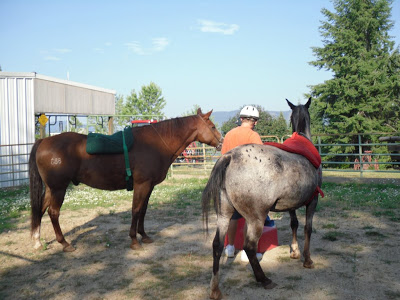 Randy with Cocoa (on left) and Dandy

A number of people came to attend the meetings from quite a distance. Nancy had room for them in her home, so several people stayed for the entire week-end, arriving shortly before the first meeting on Friday night.

Those gathered before the meeting shared a meal together, which neither Randy nor I attended. I generally do not eat much before meetings, as it is hard to speak with a full stomach. I spent the time praying, and seeking the Father for those things He would share with His people.

The Spirit impressed upon me that He had a very sober message for His people, and I began to pray that the Father might prepare people’s hearts to receive it. Shortly before the meeting was to begin, Randy and I arrived. I went upstairs to set up my laptop computer and projector, while Randy went to check on the horses.

Shortly afterwards Randy returned and asked Nancy if he could speak with her outside. He told her that Cocoa was in great distress. He was sweating profusely, blowing hard, pacing around frantically, and had blood on one leg. Nancy quickly jumped on her four wheeler and went to check on him, and a couple of women followed her.

A short time later one of the women returned and said that the men present were needed out by the horses. Cocoa was down on the ground when we all arrived, and had gotten his hind feet stuck in a wire fence. Randy and Nancy had been working to free him. Nancy had given Cocoa a tranquilizing shot to calm him down. Randy had just freed his feet from the fence, but there was great concern for Cocoa being down, as this was a bad position for a horse to be in. We attempted to get him to his feet, but were unable to do so. As a veterinarian had been called, we waited while Nancy tried to keep her horse calm.

It took about an hour for the Vet to arrive. He was soon able to organize everyone and get the horse on its feet. He began to observe the horse and after some time concluded that the horse had a very serious bowel obstruction. This had caused him great pain and led to his distress. After doing all he could, he told Nancy that this magnificent horse would have to be put down (euthanized).

The veterinarian administered the shot as Nancy stood by her precious horse’s head. After a few minutes the horse collapsed to the ground and died.

During this time, the entire group of people gathered for the meetings had been outside observing all of these things. About two hours had passed, and I knew that holding a meeting that night would not be appropriate. We agreed to begin the next morning at the scheduled time.

All the while these things were occurring I was seeking the Father to know what He was speaking through these events. There is nothing that happens by chance in the lives of Yahweh’s saints, and I wanted to discern what He was speaking. That night the Spirit impressed upon me the following Scripture:

Friday night when Randy and I arrived, all those gathered were sitting around the table eating. People were engaged in conversation and the mood was light and upbeat. I knew the Father had a serious message for His sons and daughters, and the atmosphere would need to become one of soberness. How quickly things changed when our host lost her beloved horse. 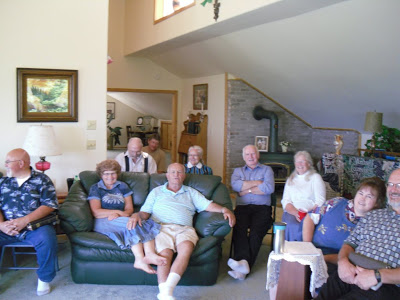 A Portion of Those Gathered in Kooskia
(My camera assigned a number to this photo that ended in 153!)

People of God, I believe the hour is late and many dire things are about to befall this nation. The Spirit is testifying that a remnant must follow an afflicted path through these last days. As they do they will come forth into conformity to the image of Christ.

This experience in Kooskia, the Gateway to the Wilderness, reveals the mindset the Father desires His sons and daughters to have in this season. If we could see all that is coming to America and the nations we would truly be filled with great sorrow, sobriety, and would treat every moment seriously. It is a time for the saints to be making ready, to prepare their hearts to endure the days ahead. The Father is proclaiming a sober message through me to His sons and daughters.

During the three remaining meetings in Kooskia, Idaho (Gateway to the Idaho Wilderness) I was led to present a series of talks that took the book Hinds’ Feet on High Places as its theme. This is a story of the Great Shepherd leading a character named Much Afraid along a path appointed specifically for her perfecting. Her companions were Sorrow and Suffering. Truly the Father is impressing upon His sons and daughters that the days ahead will contain these things, yet His grace will be even more abundant. He will guide the weak, the lame, and the frail. He will bring them to Zion where they will stand among the overcomers.

I will be posting the audio messages from this week-end in Kooskia as soon as I am able. I encourage all to listen to them. They are a message for this hour. The first of these messages appears below.


Hinds’ Feet on High Places – Talk One – Part One

Note: Meetings begin Friday in the Chicago area. If you are able, please plan to attend. The hour is truly late and the Father would have His sons and daughters to walk in understanding through these coming days.