Note: Dave Rubin is a homosexual man, not an anti-homosexual man. I have corrected this statement about him in this article.
Joseph Herrin (08/07/2021) 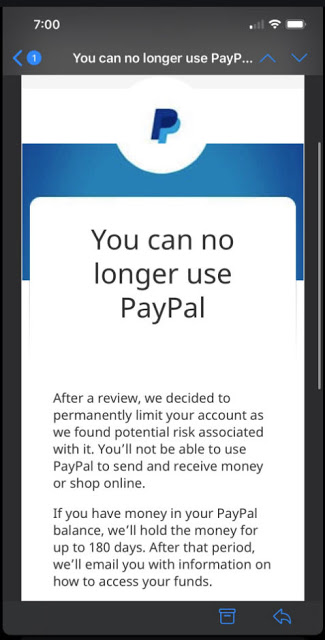 Revelation 13:16-17
He causes all, both small and great, rich and poor, free and slave, to receive a mark on their right hand or on their foreheads, and that no one may buy or sell except one who has the mark or the name of the beast, or the number of his name.
NKJV
There was a time some while back that PayPal was banning people for taking a stand against homosexuality. I prayed at that time, asking the Father whether I should immediately switch because I had a book that spoke against homosexuality. That was about 6 years ago, and I heard nothing from the Father, so I kept using them and I have posted the book again (Push Back) with no response from PayPal.
Now PayPal is creating a “No-Buy List” and is planning on banning all dissidents. They have not said when it will be created and active, but it now seems time to switch away from PayPal. To “switch away” from PayPal is easier said than done. As the following article says,
Get Ready for the ‘No-Buy’ List
Bari Weiss
By any standard, David Sacks is a super successful entrepreneur and venture capitalist. He’s invested in companies including Airbnb, Bird, Eventbrite, Facebook, Houzz, Lyft, Palantir, Postmates, Reddit, Slack, SpaceX, Twitter, and Uber. Now he’s a general partner at Craft Ventures.
But that’s not the reason to listen to him. It’s because he’s deeply insightful and consistently ahead of the curve on issues including free speech and Big Tech, how to amend Section 230, San Francisco’s meltdown, and more. You might remember his name from this column I wrote a few months back.
I don’t typically recommend Twitter to anyone I like. But if you’re already there, I strongly suggest following David.
—BW
When I helped create PayPal in 1999, it was in furtherance of a revolutionary idea. No longer would ordinary people be dependent on large financial institutions to start a business…
“As for the notion of building your own PayPal or Facebook: because of their gigantic network effects and economies of scale, there is no viable alternative when the whole industry works together to deny you access.
Kicking people off social media deprives them of the right to speak in our increasingly online world. Locking them out of the financial economy is worse: It deprives them of the right to make a living. We have seen how cancel culture can obliterate one’s ability to earn an income, but now the cancelled may find themselves without a way to pay for goods and services. Previously, cancelled employees who would never again have the opportunity to work for a Fortune 500 company at least had the option to go into business for themselves. But if they cannot purchase equipment, pay employees, or receive payment from clients and customers, that door closes on them, too.”
[https://bariweiss.substack.com/p/get-ready-for-the-no-buy-list]
The first part of the article giving a nod to David Sacks is written by Bari Weiss. The latter part is written by David Sacks. What is the “No-Buy List” that PayPal is creating? David Sacks was a founding member of PayPal. He was its COO (Chief Operating Officer). He sold out of it a number of years ago and is now a superbly successful Entrepeneur and Venture Capitalist. Although David Sacks is against what PayPal says they are ready to do, the reasons he gives are fundamentally flawed. David Sacks speaks as one who doesn’t recognize the centralized function of the Multinational Corporation, or TNC (Transnational Corporation). Could he have so much success in this world and really be so flawed? In 2012 he contributed $55,000 to the Mitt Romney campaign and in 2016 he gave more than $38,000 to Hillary Clintons campaign. I don’t think so, but who knows.
In 2015 I wrote the article titled Network of Deception. It was based upon a 2011 scientific study published by three systems theorists at the Swiss Federal Institute of Technology in Zurich, Switzerland. The study started with a globe shaped array of red and yellow lights. 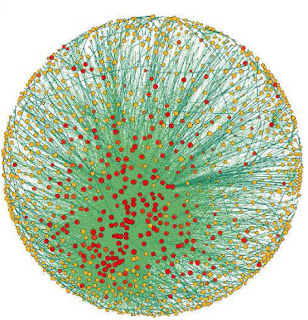