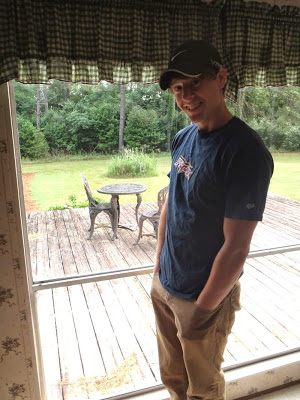 Nicholas at His New Rental

It has been over six months since Nicholas, a young man I met through the prison ministry Yahweh has led me to conduct, came to stay with me in my motorhome. It is hard to imagine more than half a year has passed since his arrival. Time has flown by. Yesterday was a day of transition for Nicholas (and myself as well) as he procured his own rental, a very nice three bedroom, single-wide manufactured home on a large and beautiful lot a few miles outside the town of Montezuma.

About a month ago Nicholas told me the Lord had been showing him the number fourteen a lot, and he sensed Yahweh was telling him he would be experiencing some transition soon. The first transition occurred when he was offered a job building wooden storage buildings for a local Mennonite owned company. Nicholas discerned this offer to be something Yahweh would have him accept, so he tendered his resignation at the large dairy where he had been performing maintenance work, and two weeks later began his new job. 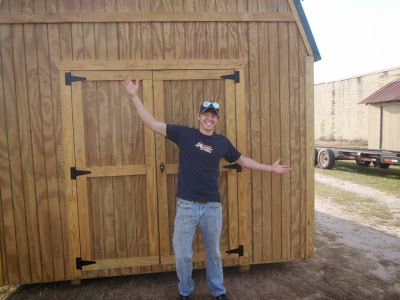 Nicholas in Front of One of His First Storage Buildings

Nicholas works as an independent contractor at this company, being paid a set amount for each building he constructs. He loves the work and is excited about the new job skills it is teaching him.

Not long after he began his new job, Nicholas was at one of the multi-church volleyball games that occur weekly around this Mennonite community when a young man asked if Nicholas would give him a ride home. When Nicholas was dropping the young man off he saw the single-wide manufactured home across the street and asked him about it. It was rental property owned by the young man’s father, and it was vacant and needing a renter. Nicholas spent a few days praying about it, and discerned it to be Yahweh’s will that he move there. Everything worked out and yesterday Nicholas was excited to move into the first place where he has been out on his own.

Yesterday morning I rode with Nicholas to take a car load of his possessions over to his new digs and he showed me around. The yard is beautiful with numerous mature pines throughout the front and mature bushes, plenty of grass, and a vegetable garden in the back yard. The garden belongs to the landlord as most of the Mennonites have garden plots to raise fresh produce for their families.

My primary reason for inviting Nicholas to relocate to this area last year was so that he could become involved with a group of young adults who have a sincere love and devotion for the Lord. I recognized in Nicholas an unusual sensitivity to the voice of God, and a sincere desire to walk in a manner pleasing to Him. Nicholas had never been around other young people with a similar devotion, indeed finding even a small group of young people who are committed to honoring God in their lives is very rare today. I knew the church my daughter Kristin attended had such a group and I believed it would be beneficial for Nicholas to spend time with them. It has turned out to be a very profitable experience for all involved.

Some reading my blog posts where I mention my daughter and the church she attends often ask me if it is a Mennonite church. The church Kristin attends split off from one of the local Mennonite churches about a dozen years ago. They consider themselves non-denominational as they wanted to pursue relationship with Christ to a greater degree, and to escape some of the traditions and legalism imposed by the Mennonite community. Most of the women continue to wear the head covering, to wear dresses, and to dress modestly. Kristin actually began the practice of headcovering at the age of 14 after being convicted of the need to do so from reading the Scriptures, so she was already observing this Biblical practice when we first came and visited the church some months later.

The young people are very mission minded. Today they (and some of the older adults as well) are going to Atlanta to minister to the homeless and street people. They are taking fifty prepared meals, and will distribute them to those in need as they seek an entry to share with them about the love of Christ. My daughter is taking her guitar and some of the young people will be singing.

Nicholas has expressed to me more than once in recent weeks that he wanted his new home to be a place of ministry, not merely somewhere for him to live and call his own space. Yahweh answered the desire of his heart in a remarkable manner. Two days ago a brother in Christ who has come to visit me on several occasions, and whom Nicholas has met, called me. This Christian brother is twenty years younger than me, and twelve years older than Nicholas. He has been led of Yahweh to embrace an experience of van camping for more than a year. It has been a year of much spiritual growth and physical conditioning for him.

This brother called me to give me an update on some surgery I knew he was scheduled to have. He wanted to know if he might come stay with me a couple days so that he could rest and experience some recovery from his surgery. Because he does not have air conditioning when he is camping, and
he has to wear a compression vest for the next six weeks, necessitating that he wear a t-shirt underneath the vest and an outer shirt over it, he was not relishing dealing with the Georgia heat during his recovery period.

When Nicholas heard of this brother’s need, he suggested that he come and stay with him since he had two unused bedrooms in his new rental. The timing was perfect as this brother’s arrival came the same day Nicholas transitioned to his new location. I am blessed to observe in Nicholas this desire to minister the life and love of Christ to others. Please pray for him as he will have numerous challenges in the varied responsibilities of being out on his own. I noted that the day of his move was May 22nd. That is 5-22 (grace and flesh cutting). Although there is certainly blessing and much for Nicholas to be thankful for in his new home, Yahweh continues to press all of His sons and daughters forward to a greater conformity to Christ. There will be new tests and new challenges for Nicholas, but as he continues to walk humbly and contritely before the Father, I am confident he will do well.

Members of the church Nicholas and my daughter attend are giving Nicholas a house warming party on Tuesday. This is one of the blessings he is experiencing. The generosity of other believers will help him to get set-up as there are many things a young person getting out on their own for the first time will need.

I had not anticipated it, but after Nicholas drove off last night and I was left alone for the first time in half a year in what now seemed an empty bus, I experienced twinges of what some refer to as “empty nest syndrome.” There was a sadness as a sense of aloneness settled upon me, yet there was also an anticipation for the new experiences Yahweh will bring to Nicholas for his continued spiritual growth. Life contains a lot of “letting go” experiences. Along with this letting go there are also a lot of new beginnings.

In a significant way last night, the Father drew my attention to the clock at the moment it read 8:08. Eight is a number denoting new beginnings. It is a time of new beginnings for myself as well as Nicholas. You never know what a day will bring.