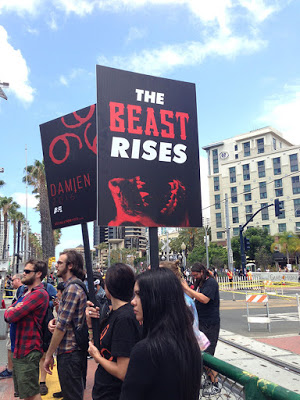 In the Unleash the Beast series, I focused on the message inherent in the horse American Pharoah winning the Triple Crown. In the final race, the Belmont Stakes, the horse was sponsored by Monster Energy whose logo incorporates a 666 reference, and whose motto is “Unleash the Beast.” There have been other testimonies given in recent days of the beast being unleashed at this time. Society is rapidly descending into spiritual and moral darkness as restraint is removed from the ever present beast nature and society becomes more openly antagonistic towards Christ, His righteousness, and His church.

The image above comes from the recent Comic Con event held in San Diego, California. Comic Con is known for its ability to draw a huge crowd of enthusiasts, many of them dressed as cosplayers (costume players). It also has been attended regularly by a group of Christians who have stood across the street holding posters and signs declaring messages indicating that Jesus Christ is the only true superhero who is able to save the world. This year, a group promoting A&E channel’s new series on the anti-Christ, decided to gain attention by crashing the Christian’s protest and displaying signs that mocked their message.


The promoters countered “Jesus saves” and “Jesus Will Rise” slogans with posters and shirts that read, “From Flames, Damien Will Rise” and “The Beast Rises,” according to The Hollywood Reporter.


Additionally, street teams handed out stickers, pins with “666” on them, and pamphlets directing Comic-Con guests to visit www.ItsAllforYou.com, a site that warns visitors, “[Damien] is the only way to deal with the coming end.”
[Source: http://bit.ly/1HkpcGG]

This activity demonstrates the validity of the New Testament prophecy that mockers would arise in the last days.

II Peter 3:3
Know this first of all, that in the last days mockers will come with their mocking, following after their own lusts…

Jude 17-18
But you, beloved, ought to remember the words that were spoken beforehand by the apostles of our Lord Jesus Christ, that they were saying to you, “In the last time there shall be mockers, following after their own ungodly lusts.”

It also emphasizes a second meaning to the message of unleashing the beast. The video below contains a trailer for the A&E program, and it ends with the words “He’s Coming – The Beast.”

In the book of Revelation there is a world ruler who is described as “the beast.”

Revelation 13:1-8, 16-18
And I saw a beast coming up out of the sea, having ten horns and seven heads, and on his horns were ten diadems, and on his heads were blasphemous names. And the beast which I saw was like a leopard, and his feet were like those of a bear, and his mouth like the mouth of a lion. And the dragon gave him his power and his throne and great authority. And I saw one of his heads as if it had been slain, and his fatal wound was healed. And the whole earth was amazed and followed after the beast; and they worshiped the dragon, because he gave his authority to the beast; and they worshiped the beast, saying, “Who is like the beast, and who is able to wage war with him?” And there was given to him a mouth speaking arrogant words and blasphemies; and authority to act for forty-two months was given to him. And he opened his mouth in blasphemies against God, to blaspheme His name and His tabernacle, that is, those who dwell in heaven. And it was given to him to make war with the saints and to overcome them; and authority over every tribe and people and tongue and nation was given to him. And all who dwell on the earth will worship him, everyone whose name has not been written from the foundation of the world in the book of life of the Lamb who has been slain….

And he causes all, the small and the great, and the rich and the poor, and the free men and the slaves, to be given a mark on their right hand, or on their forehead, and he provides that no one should be able to buy or to sell, except the one who has the mark, either the name of the beast or the number of his name. Here is wisdom. Let him who has understanding calculate the number of the beast, for the number is that of a man; and his number is six hundred and sixty-six. 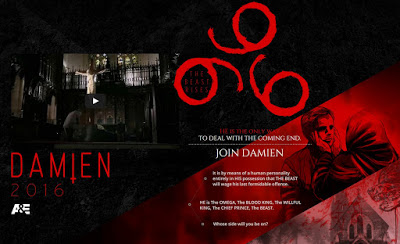 Notice the mocking of the Son of God. The video opens with an image of Christ on the cross. This image, far from being an exaltation of Yahshua, is used by Satan and his followers as a symbol of Satan’s victory over Christ. Note also the inverted cross in the name DAMIEN, as well as the words “HE IS THE ONLY WAY,” this being a reference to the antichrist. This is a mockery of the words of Yahshua.

Further down we finds the words “He is The OMEGA…” In the Unleash the Beast series of writings I made mention of the significance of the letters “O” and “A” being reversed in the name of the horse American Pharoah. Christ is declared in the Scriptures to be the Alpha and the Omega, while the anti-Christ is being represented as the Omega and the Alpha. 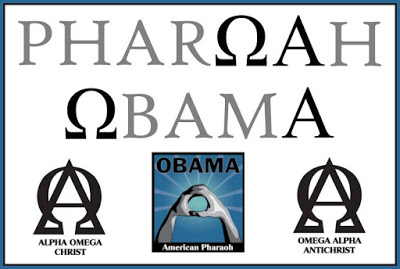 The horse American Pharoah is a beast. During the first race of the Triple Crown he wore the number 18 (6+6+6), and during the last race he was adorned with the imagery of Monster Energy, bearing the 666 logo. The final race was held on 6/6/15 which is itself a 666 reference. American Pharoah’s victory was emblematic of the victory of the beast. Twenty days after American Pharoah’s victory, the U.S. Supreme Court ruled that homosexual marriage was legal in all fifty states. The President ordered the White House to be illuminated in rainbow colored lights to celebrate the triumph of the beast nature over Biblical morality. The Reverend Franklin Graham, son of evangelist Billy Graham, decried the brazen immorality of America’s government leaders, and stated that America would not like what it found at the end of this rainbow. 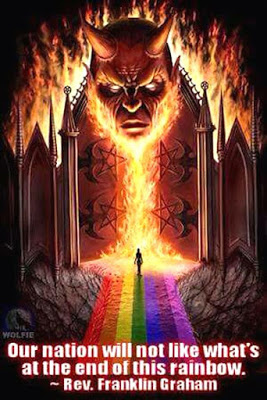 American government and media have celebrated the advance of moral decadence in the nation. Society itself has hardly flinched, proving itself willing to accept an ever increasing immorality. An unusual sign displaying the casual acceptance of the United States to Satanic depravity was revealed when an amateur photographer in Seabeck, Washington snapped a series of photos of a raven landing on the back of a bald eagle, and the eagle showing no reaction to the trespass. 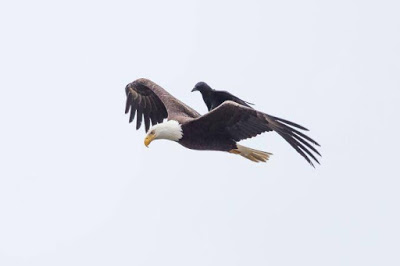 The raven, or crow, is listed as an unclean bird in the Old Testament. It has historically been viewed as symbolic of dark spiritual forces. In the second movie in The Omen/Damien series, a raven/crow played a significant role as the embodiment of evil. More photos available at the following link: 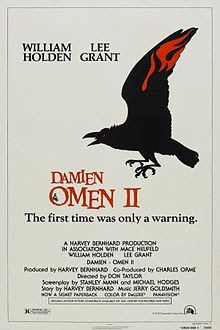 A dark spirit has truly descended upon America, and the nation has accepted it without protest. The darkness is greatly accelerating. I am reminded of the following prophecy recorded by Isaiah.

Isaiah 60:1-2
“Arise, shine; for your light has come, and the glory of Yahweh has risen upon you. For behold, darkness will cover the earth, and deep darkness the peoples; But Yahweh will rise upon you, and His glory will appear upon you.”

At this hour a polarization is taking place. Either a dark spirit of evil is increasing in men’s lives, or Yahweh’s presence and glory is increasing. We must give ourselves to a pursuit of greater holiness and sanctification unto Yahweh, or we will find ourselves succumbing to the encroaching spirit of evil. It will be a remnant who overcome the darkness of this hour. Will you be one of the remnant?


(Thanks to Melanie, Roger, and others for links to various stories and images.)

The following commercial was recommended to me by a brother in Christ. It is another form of mocking. In this instance it is mocking the apocalypse that is coming. How funny will this be when the cities of America and the rest of the world are on fire?