I have continued to stay busy formatting books for the Amazon Kindle. There are now five books available in Kindle format on Amazon’s website. Four books are also available as paperback, so please note which you are ordering if you use Amazon to purchase the books. It is pretty easy to tell which books are Kindle format since they are all $1.00 each. You can find all of the Kindle books in one place by going to the following link:

I was making excellent progress toward getting the eleven books that I want to convert to E-book format done, until my main computer crashed Tuesday. It locked up, the screen blanked out, and it will not boot up anymore. It appears to be either a motherboard or a processor problem. The motherboard has already been replaced once, and it looks like I will have to send it off for replacement again. The computer is still under warranty, so there should not be any expense involved. I will most likely be without the computer for several weeks.

I have an older laptop that I use as a back-up unit. Unfortunately, I had not saved the recent files I was working on, so I cannot load them onto the laptop. I was copying HTML code from the books already converted and pasting it into the books I was working on. Without a copy of the old files on hand I will have to duplicate much of my work in writing the HTML code I am using when formatting E-books. I am eager to get all of the books revised and/or formatted to post as E-books. Then I can move on to the next project in a long list of things to do.

I had guests visiting from out of state the past two days. It was my first opportunity to hosts guests overnight in The Dreamer, my converted school bus that now serves as my home. We actually had five people around the dining table Thursday evening, although there were only three staying in the bus overnight (including myself). It was quite cozy, and we all had a good time of fellowship.

The end of December will mark one full year that I have been living in The Dreamer. It has been a great blessing, giving me plenty of room to carry out the work of writing, as well as printing newsletters to mail out to men in prison. 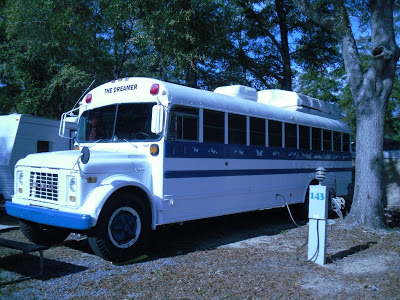 You may note the site number that my bus is parked in. You can see it on the electrical box in the photo above. I am in the habit of looking to the details of life to discern the presence and voice of the Father. I had been wondering why I am camped in site 143, right next to site 144. The number 144 speaks of the overcomers in Christ. I have at times noted that when the Father reveals a number that is one less than another significant number, it can indicate falling short in some way.

I believe the Father is testifying to me that there is something yet lacking in my life. I am reminded of the following Scripture:

Revelation 3:2-3
I have not found your deeds completed (perfected) in the sight of My God. Remember therefore what you have received and heard; and keep it, and repent.

Since I have been dwelling in The Dreamer the past year I have fallen into certain patterns. My most productive time of writing and ministry is in the mornings. I get the most done when I arise early, spend time in prayer, and then enter into that work set before me. Often in the evenings my mind is tired, so I would spend time idly by playing computer games (Scrabble or Minesweeper), browsing the Internet news sites, or watching a movie on the computer (I don’t own a television).

I have noted that when I do this that I almost always stay up later than I need to, and I therefore get up later the next morning. This establishes the tone for the entire day. Getting up late, I often rush through prayer time, and also tend to make poor food choices. My work suffers, and I don’t have that sense of everything being acceptable unto the Father that day.

As a matter of practice, I have found that there is much benefit in being “early to bed and early to rise.” When I get to bed early and arise early my mind tends to avoid periods of idleness, and to avoid filling my head with vain thoughts and activities. I tend to be much more focused and disciplined throughout the day. I am convicted that this is the Father’s will for me, but I have not been manifesting the self-discipline necessary to do this consistently.

When this happened, I immediately thought of what it could indicate. Was the right of the firstborn being withdrawn from me? Had I disqualified myself for it? A short time later the waitress came out with our orders. She was smiling, and informed me that she had brought my Reuben sandwich after all. The cook had found the corned beef and had filled my original order.

I have taken this as a testimony from the Father that the right of the firstborn is not assured unto me. I can either gain it, or lose it, depending upon how well I run the race set before me. I cannot rest on my laurels, or become complacent. I need to grow continually in conformity to Christ, constantly exercising self-discipline in my life. I am reminded of Paul’s words.

I Corinthians 9:24-27
Run in such a way that you may win. Everyone who competes in the games exercises self-control in all things. They then do it to receive a perishable wreath, but we an imperishable. Therefore I run in such a way, as not without aim; I box in such a way, as not beating the air; but I buffet my body and make it my slave, lest possibly, after I have preached to others, I myself should be disqualified.

Paul had in mind the same goal and prize that all saints are called to contend for; to attain to the first resurrection.

Revelation 20:6
Blessed and holy is the one who has a part in the first resurrection; over these the second death has no power, but they will be priests of God and of Christ and will reign with Him for a thousand years.

The prize of being the firstborn of Christ is beyond measure. I do not want to stand before Christ and learn that I came in a close second. The loss would be incalculable. Paul states that self-control “in all things” must be practiced by those who would attain to the prize God has set before the saints.

I have not been running the best race possible. I have made some good laps around the track, but Christ stated that it is the one who endures to the end that will be saved (Matthew 10:22). I have not yet finished my course, and I must finish strong. I invite those who are willing, please pray that I might manifest that focus and self-control necessary to win the prize. I am easily wearied and distracted, and many carnal impulses wage war in my members. I have proclaimed the message of sonship, of the firstborn, and a crucified life. Yet, I can still be disqualified if I do not buffet my body and keep it under subjection. Knowing something and doing it, are two different things.

On a final note, my physical recovery from the recent motorcycle accident continues. It is now about 11 weeks from the event and I am able to put some weight on the injured leg. In another week and a half I anticipate being able to put aside the crutches and begin walking without them. I still have significant swelling in the left foot, but it is getting stronger.

My crippled condition does not seem to bode well for one who is called to run a race, but we have a Savior who will strongly support those who commit themselves fully to Him. The Scriptures testify that God will take the lame and bring them to Zion.

Micah 4:7
I will make the lame a remnant, and the outcasts a strong nation, and Yahweh will reign over them in Mount Zion from now on and forever.

Hosea 6:1-3
Come and let us return to the Lord, for He has torn so that He may heal us; He has stricken so that He may bind us up. After two days He will revive us (quicken us, give us life); on the third day He will raise us up that we may live before Him. Yes, let us know (recognize, be acquainted with, and understand) Him; let us be zealous to know the Lord [to appreciate, give heed to, and cherish Him].
[Amplified Bible]

May you be blessed with peace and understanding in these days!