I mentioned in yesterday’s post about an excursion I had on my bicycle down to the south end of Jekyll Island. At the St. Andrews Picnic Area there is a new display that relates the history of a ship known as The Wanderer, and its nefarious connection to Jekyll Island. The display was erected last year on November 25th. Following is a photo taken during its erection.

The Wanderer was a ship built under the guise of being a pleasure yacht. The actual purpose intended by its owners was to transport slaves from Africa to America. This was at a time when the importation of slaves from Africa had been banned for fifty years. The following citation is from Wikipedia.

Upon ending the slave trade in all British colonies in 1808, the British began pressuring other nations to end their slave trades. At the same time, the British began pressuring the African rulers to stop exporting people as slaves. The United States officially outlawed the importation of slaves in 1808. It did not use its own ships to enforce the law until 1859, when U.S. naval ships joined British patrol ships in the Caribbean to intercept slavers.

Even after the US outlawed the slave trade, people tried to evade the law. The Wanderer was built in 1857 and in 1858 it was partially outfitted for a long voyage. The ship flew the pennant of the New York Yacht Club. Although there was speculation about the ship, it was inspected and there was no conclusive evidence that it was to be a slave ship, so it was allowed to pass.

The captain sailed to Angola, Africa where over 10 days he had shelves and pens built in to accept a shipment of 490-600 slaves, who were loaded on the ship. Many of the slaves died on the six-week journey across the Atlantic Ocean. The Wanderer reached Jekyll Island, Georgia on November 28, 1858 and delivered 409 slaves alive.

A prosecution of the slave traders was launched, but the defendants were found not guilty. The outrage aroused by the case was a contributing cause to the American Civil War. During the war, the ship was seized by Union troops and used for the Naval blockade of the Confederate States of America.
[Source: http://en.wikipedia.org/wiki/The_Wanderer_(slave_ship)]

Following is an illustration of what some of these “shelves” on a slave ship looked like when loaded with the intended cargo. 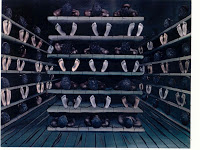 Africans on a Slave Ship
(Click on picture for larger image)

The Wanderer had to sail to Jekyll Island at night under cover of darkness to escape detection. Those whose works are evil must do their works in the dark.

Luke 22:52-53
“Have you come out with swords and clubs as against a robber? While I was with you daily in the temple, you did not lay hands on Me; but this hour and the power of darkness are yours.”

Fifty-two years later, once more a very dark deed occurred on Jekyll Island. It too involved the enslavement of people. A secret meeting of wealthy bankers was conducted with the intent of subjugating the entire population of the United States. This meeting occurred in the hotel of the Jekyll Island Club, and I have written of this meeting in the past.

Paul Warburg was the driving force behind this meeting. He was a representative of the Rothschilds, and trained to understand the purpose and organization of the national banks of Europe. It was his goal to establish a similar banking system in America to place control of the government, and the people, into the hands of an international cabal of wealthy men.

The Jekyll Island Museum records how these men stole quietly onto the island under the guise of a duck hunting excursion. There true reasons were cloaked out of fear that if their purpose was discovered they should be accused of treason. It is perhaps not coincidental that this clandestine meeting occurred at the precise time of year that The Wanderer had disembarked its cargo of slaves onto the island half a century earlier. Both were illegal activities. Both involved slavery. Both had as their purpose the subjugation of one class of men for the benefit of an elite group.

To understand the treasonous mindset of Paul Warburg, one need only consider that he also founded the Council on Foreign Relations. This “Think Tank” was fully embraced by the government as far back as Harry Truman’s presidency, and most of the recent presidents have been active members. To understand the goals of the Council on Foreign Relations, the statement of Paul Warburg’s son, James Paul Warburg, given before the United States Senate on February 17, 1950 will shed much light.

Henry Kissinger is perhaps one of the most well known members of the CFR. His views on a one world government are well known.

[The New World Order] cannot happen without U.S. participation, as we are the most significant single component. Yes, there will be a New World Order, and it will force the United States to change it’s perceptions.
[Source: Henry Kissinger, World Affairs Council Press Conference, Regent Beverly Wilshire Hotel, April 19th 1994]

The surrender of America to a New World Order will not come about without violence. Tremendous crises must be created in order to move the American public to a place where they will surrender their liberty and independence in exchange for a promise of “peace and safety.”

Today, America would be outraged if U.N. troops entered Los Angeles to restore order [referring to the 1991 LA Riot]. Tomorrow they will be grateful! This is especially true if they were told that there were an outside threat from beyond, whether real or promulgated, that threatened our very existence. It is then that all peoples of the world will plead to deliver them from this evil. The one thing every man fears is the unknown. When presented with this scenario, individual rights will be willingly relinquished for the guarantee of their well-being granted to them by the World Government.
[Source: Dr. Henry Kissinger, CFR Member, Bilderberger Conference, Evians, France, 1991]

The secret meeting that led to the establishment of the Federal Reserve Banking System was held in November of 1910. Next month will mark 99 years since that event. 99 is a multiple of 9 and 11.

According to E.W. Bullinger’s book Numbers In Scripture, the number 9 denotes judgment, and the number 11 denotes disintegration and disorder. We saw these two numbers featured prominently in the events of 9-11. They held the same meaning then. An additional witness is that November is the 11th month of our calendar year, but it was originally the 9th month. The name November is derived from the Latin novem meaning “nine.”

The Spirit of Christ has been signifying that judgment is coming to the nation. It is to be divided, and to experience great civil unrest as she did in the days of the Lincoln presidency. It has been noted in past blogs that there are many similarities to the Presidency of Barack Obama and that of Abraham Lincoln.

During the inauguration of the 44th President of the United States many details of great prophetic significance were observed. None were less prefigurative of those things to come to the nation than Barack Obama taking his oath of office with his hand upon the same Bible used by Abraham Lincoln in his inauguration.

Both men were legislators from the state of Illinois.

Both men were elected to the presidency the first time they ran for the highest office in the land.

Both men are closely related to civil rights issues as Lincoln issued the Emancipation Proclamation and Obama is looked upon as the fulfillment of all that which began with this proclamation and was enunciated in the words of Martin Luther King.

Lincoln was the 16th President which is 4 times 4. Obama is the 44th President.

Lincoln took office in an hour when the nation was facing a great crisis, and so too has Barack Obama.

Proverbs 22:7
The rich rules over the poor, and the borrower becomes the lender’s slave.

The turmoil coming to America and the world is designed by Satan and carried out by evil men who have a desire to rule all things. The value of human life means no more to them than the lives of slaves who died in such great numbers as they were crammed into ships such as The Wanderer. There is an evil cabal of men who seek to make merchandise out of mankind. 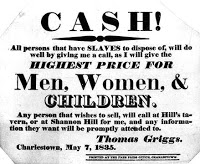 If we would remain free, let us choose now to present ourselves as slaves to righteousness.

Christ must purify His people. The process will be a very difficult one.

I Peter 4:17-19
For it is time for judgment to begin with the household of God; and if it begins with us first, what will be the outcome for those who do not obey the gospel of God? And if it is with difficulty that the righteous is saved, what will become of the godless man and the sinner? Therefore, let those also who suffer according to the will of God entrust their souls to a faithful Creator in doing what is right.