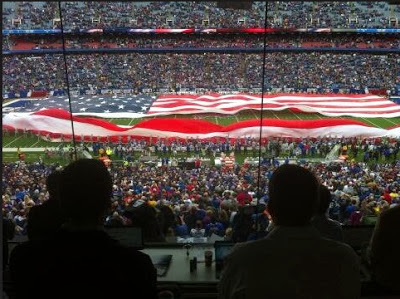 The headline of this post may seem overly dramatic, for Washington (D.C.) is still standing, and America continues her steady descent into moral and spiritual darkness. Yet, if I were to provide an interpretation for events that occurred yesterday, Sunday November 17, 2013, then the title of this post sums up the matter well.

An intense series of storms swept across the Midwest yesterday, giving birth to numerous tornadoes. The most extensive damage appears to have occurred in the city of Washington, Illinois. Hundreds of homes were damaged or destroyed in the city of 15,000 inhabitants. Scanning through photos of the damage this morning I came across one image of a shredded American flag in the town of Washington. 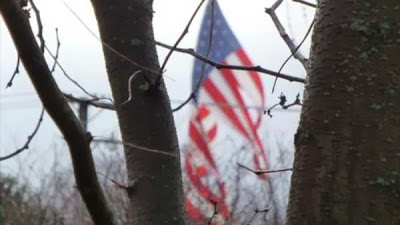 The damage elsewhere throughout the town was severe as the powerful tornado ripped through neighborhoods. 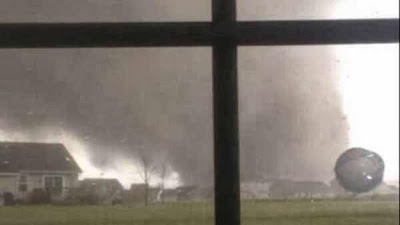 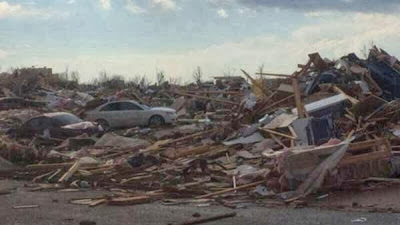 Perhaps this event serves as a prophetic warning of what is coming to America on the 200th anniversary of the destruction of Washington, D.C.. In 1814 the British Army invaded Washington and burned much of the city, including the White House and the Capitol Building. 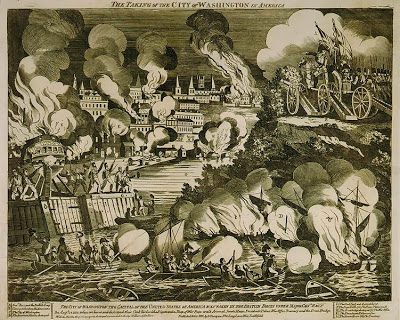 A second witness to this event in Washington occurred in Buffalo, New York on the same day. As the national anthem was playing, National Guardsmen rushed onto the field to spread out an immense 100 yard long American flag. This flag was very sturdy, and has been used in other venues in numerous cities. Yet this day, as National Guardsmen stood holding the flag, the winds in the stadium ripped the flag in two. 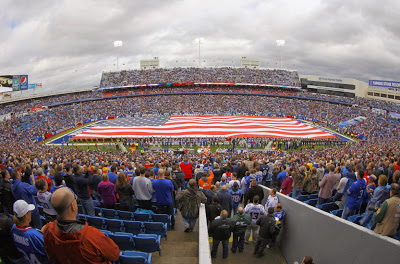 The Flag Moments Before it was Torn Asunder

What makes this a particular poignant parable is that the Governor of New York, Andrew Cuomo, had greeted the National Guard members just before this occurred. 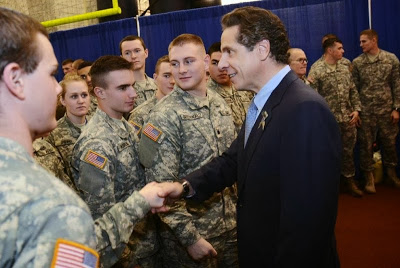 It is the Governor who has authority to call out the National Guard in times of emergency. Significantly, the image of the flag ripping that has been broadcast the most over the news websites, shows the flag upside as it is torn. An upside down flag is internationally recognized as a sign of distress, or emergency. 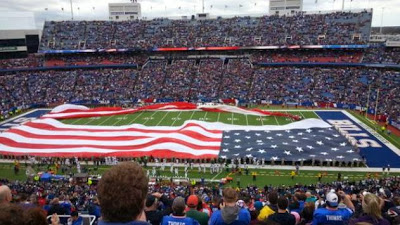 A further event occurred during this football game in Buffalo. A Buffalo Bill’s fan in the upper deck of the stadium foolishly attempted to slide down the railing when he lost his balance and fell over backwards into the lower seating section about fifteen feet below him. The man survived, but was injured and also caused a head injury to another person that he struck in his fall. Both individuals were taken to the hospital. Thus a time of pleasure suddenly turned into a time of tragedy, adding further affirmation to the sign of the flag being torn asunder.

As mentioned, both the flag ripping, and the city of Washington, IL being struck by a powerful tornado, occurred on the same day. The date was the 17th, a number which also bears significance. In Paul’s epistle to the Romans he lists 17 things that Christians are likely to suffer, assuring the saints that none of them can separate them from the love of Christ.

Romans 8:35-39
“Who shall separate us from the love of Christ? Shall

as it is written, For Thy sake are we killed all the day long; we are accounted as sheep for the slaughter. Nay, in all these things we are more than conquerors through Him that loved us. For I am persuaded, that,

shall be able to separate us from the love of God which is in Christ Yahshua our Lord.”

The Spirit has been testifying for some time that very difficult days lie ahead for the nation and Yahweh’s people. It will be a time when many are purged, purified, and refined. The wicked will continue to do wickedly, not understanding what Yahweh is doing, but those with insight will understand (Daniel 12:10).

Whether America will be torn asunder in 2014 in a parallel to Washington, D.C. being sacked and burnt in 1814 remains to be seen. It is a time to be watchful and to seek the Lord, ordering our lives in righteousness before Him.

Addendum:
I know that many readers like to hear about my daughter Kristin and how the Father is using her. She will be going to Florida once more in a few weeks to minister to women in prisons there. She has done this on numerous occasions both in Florida and South Carolina prisons. The ministry she works with recently posted a video with images of some of the women ministering in the prisons. At the 33 second mark you will see my daughter kneeling down with a Bible in her hand reading to a woman through her cell door.