Whitney Houston – Death of the Patriot 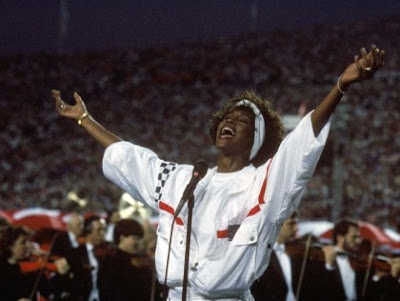 On February 11th, six days after Super Bowl XLVI was played where the Giants defeated the Patriots, singer Whitney Houston died. Houston was the most awarded female artist of all time, having garnered 415 career awards as of 2010. These awards included 22 American Music Awards (AMA), 2 Emmys, 6 Grammys, and 30 Billboard Music Awards. Whitney Houston’s single “I Will Always Love You” became the best selling single by a female artist in music history. Whitney Houston sold over 170 million albums, and is the only artist to have seven consecutive single releases reach the number one position on the Billboard Hot 100 charts, more even than the Beatles and the Bee Gees who each had six consecutive number one releases.
[Data Source: http://en.wikipedia.org/wiki/Whitney_Houston]

The death of Whitney Houston is symbolic in a number of ways. It is a public foreshadowing of the removal of joy and mirth from America, as well as a harbinger of the demise of the American patriot.  Considering this news event, I perceived in it an echo of “The day the music died” in America. (More on this later.)

One detail of the recent half-time show from Super Bowl XLVI is worthy of mention. At one point in the performance a figure symbolizing the god Mercury with winged feet, and a harp, or lyre, in his hands is seen dancing around Madonna. As he swirls around her, he places the harp in Madonna’s hands. Madonna strums the harp and its music is heard. The harp is then withdrawn from her hands by Mercury, symbolizing the removal of music from Babylon. 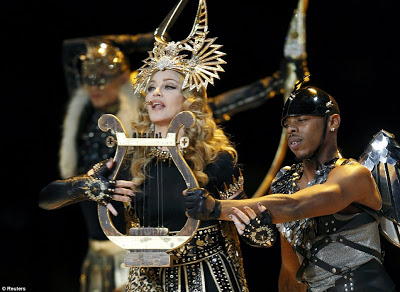 Mercury Taking Away the Harp

The prophet Ezekiel prophesied the following judgment against Tyre, that great city of commerce that lay on the waters of the Mediterranean.

Ezekiel 26:11-13
“With the hoofs of his horses he will trample all your streets. He will slay your people with the sword; and your strong pillars will come down to the ground. Also they will make a spoil of your riches and a prey of your merchandise, break down your walls and destroy your pleasant houses, and throw your stones and your timbers and your debris into the water. So I will silence the sound of your songs, and the sound of your harps will be heard no more.”

On the website Chozeh and Nabiy, the following comment is made regarding Madonna’s connection to the image of the harp.

Madonna was born on 16 August, 1958, precisely 2790 weeks and a day from Super Bowl Sunday at which she will perform.


kitharodos {kith-ar-o’-dos} from 2788 and a derivative of the same as 5603; a harper, one who plays the harp and accompanies it with his voice.


Essential (sic), a musician, a singer… this word occurs in only 2 verses in the Holy Bible, and in both verses the topic has to do with America, Babylon the Great.  In the first case, mention of Babylon will not appear until later in the chapter, specifically in Revelation 14:8 (“Babylon is fallen, is fallen…”).  Here they are; first Revelation 14:2-


Then Revelation 18:22, which is a pronouncement of the utter devastation which America will face-

Six days after Madonna’s occult Super Bowl performance one of the most popular female singers of this generation dies unexpectedly at a young age. Whitney Houston was in Los Angeles to attend the Grammy Awards. Paul Shaffer, a musician, when interviewed about the death of this singer stated:

“Here is music’s happiest night combined with such a sad note,” he said. “You got to be some kind of philosopher to make some kind of sense out of this. I certainly can’t.”
[Source: http://www.cnn.com/2012/02/12/showbiz/whitney-houston-death/?hpt=hp_c1]

Joy and mirth, feasting and celebration, is replaced with sadness and sorrow. Tragically, there are few who will make sense out of this tragedy, or of the events it foreshadows. The passage above from Revelation speaks of “the voice” of music being extinguished as Yahweh brings judgment upon Babylon, that profane mixture of religion and commerce. America has made Christianity into an obscene caricature of what Christ and His apostles established it to be as her citizens have tried to serve both God and mammon. Now the judgment must fall.

We live at an hour when the voice of mirth and song will be stilled in the land. Calamities must come which will be so devastating that the voice of mourning will replace the sound of partying and celebration. At Barack Obama’s inauguration ceremony held in front of the Lincoln Memorial, the song American Pie, written by Don McLean was sung. This song includes the lyrics:

But February made me shiver,
With every paper I’d deliver.
Bad news on the doorstep;
I couldn’t take one more step.

Here we are in February, and the news is reporting on the death of Whitney Houston who was only 48 years old. She had performed just two days earlier at a pre-Grammy event where she sang a rendition of Jesus Loves Me with Kelly Price. In one sense, this serves as a sign of judgment upon those who have transformed Christianity into entertainment. Houston came from a family involved in gospel music, and she got her start singing in churches. Her life, however, was carnal and self-serving. She honored Christ with her lips, but her heart was far from God.

Whitney Houston was known for her melancholy ballads that often spoke of a longing to be loved. The following words from American Pie seem fitting.


And in the streets: the children screamed,
The lovers cried, and the poets dreamed.
But not a word was spoken;
The church bells all were broken.
And the three men I admire most:
The Father, Son, and the Holy Ghost,
They caught the last train for the coast
The day the music died.

I would not leave the devoted disciples of Christ without hope for these days. During a time of great tragedy, death, devastation, and disaster, there will be a revival among a remnant of God’s people. A Chenoa has recently posted a three part series titled Paradigm Shift that I believe is Spirit breathed. I will provide the links to the posts at the end of this blog for your edification and encouragement.

With America entangled in the Persian Gulf War, Houston performed “The Star Spangled Banner” at Super Bowl XXV on January 27, 1991. Due to overwhelming response to her rendition, it was released as a commercial single and video of her performance, and reached the Top 20 on the US Hot 100, making her the only act to turn the national anthem into a pop hit of that magnitude (Jose Feliciano’s version reached No. 50 in November 1968)… Her rendition was considered the benchmark for singers and critically acclaimed. Rolling Stone commented that “her singing stirs such strong patriotism…” Later that year, Houston put together her Welcome Home Heroes concert with HBO for the soldiers fighting in the Persian Gulf War and their families. The free concert took place at Naval Station Norfolk in Norfolk, Virginia in front of 3,500 servicemen and women. HBO descrambled the concert so that it was free for everyone to watch. Houston’s concert gave HBO its highest ratings ever.

Following is a link to Whitney Houston’s performance of The Star Spangled Banner. 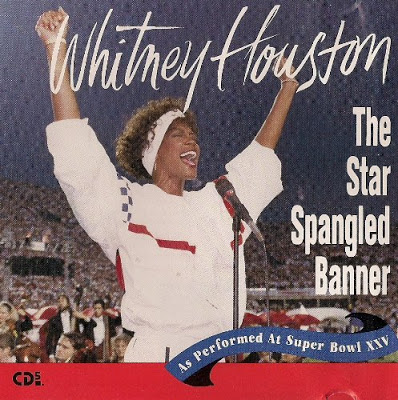 The Super Bowl in which she sang the national anthem, and this past week’s Super Bowl were 21 years apart: 7+7+7, indicating a fulness of time. Do not believe the lies that say America will recover. Her freedoms and prosperity are under judgment. Yahweh is giving His people signs that they might understand the hour they live in and the things which are at hand.

Paradigm Shift by A Chenoa