Babylon Rising – Part Two; Out of Many, One

Each day when I get up I consider what subject I should address in my writings. I have been desiring to return to the series No Apologies and finish it up. I have been experiencing what some might describe as “writer’s block” on this series. I suspect there are spiritual forces weighing in on this matter, for the entire series, although anointed, has come forth with great difficulty.

Perhaps the difficulty was in part due to the Father wanting me to pay attention to some current events at this season as well, for there have been many parables to be plumbed in a variety of national and world events, including Joe Paterno’s passing, the Costa Concordia disaster, the symbolism found in Super Bowl XLVI, and the death of Whitney Houston a few days ago. Much more could be written on these subjects, but I seek to be discerning of how much attention the Father would have me to give to each matter.

I was made aware of Nicki Minaj’s performance at the Grammy Awards Sunday night. Although the performance was definitely Satanically inspired, I am not inclined to spend time digging through the rubbish to discern the message at this time. Suffice it to say that we live in very dark days of which the prophet Isaiah spoke.

Isaiah 60:2
For behold, the darkness shall cover the earth, and deep darkness the people; but Yahweh will arise over you, and His glory will be seen upon you.

This world is growing increasingly dark as Satan is marshaling his forces and extending his visible control over the earth, its governments, media, finances, entertainments, and even its religions. With 2012 being the year of the Water Dragon according to the Chinese calendar, it seems timely that the adversary of all that is righteous and holy should be pouring forth rivers of deception and filth from his mouth.

Truly the world is drinking up that which Satan pours forth. We live in an hour when many plans of the adversary will be brought to fruition. The long sought after rebuilding of Babylon upon the earth is at hand. The nations will be brought back under the government of a single ruler who will be a pawn of Satan.

I have spoken of this work of Satan in seeking to overturn the judgment of Yahweh at Babel on a number of occasions. Satan’s work goes on apace and is approaching its grand fulfillment even as we see the One World Trade Center rising to its predicted completion in the year 2013. The number 13 is Biblically significant. Satan is the first and chief rebel against Yahweh, and the number 13 is the number of rebellion.

We must go back to the first occurrence of the number thirteen [in scripture] in order to discover the key to its significance. It occurs first in Gen 14:4, where we read “Twelve years they served Chedorlaomer, and the thirteenth year they REBELLED.”

Hence every occurrence of the number thirteen, and likewise of every multiple of it, stamps that with which it stands in connection with rebellion, apostasy, defection, corruption, disintegration, revolution, or some kindred idea.
[E.W. Bullinger, Number in Scripture]

Bullinger provides fascinating and overwhelming evidence that the number 13 is employed by Yahweh to denote rebellion, having clear links to both men and angels who rebelled against God.

It is not to be wondered at that Madonna’s half-time show at Super Bowl XLVI was 13 minutes in length. It served as an announcement of Satan rising, as was observed in a myriad of symbols from the all-seeing eye and pyramid forms 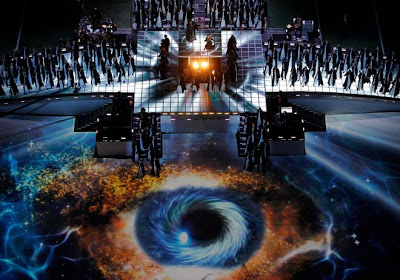 to the final dark image of the Phoenix rising as the words “World Peace” were displayed. 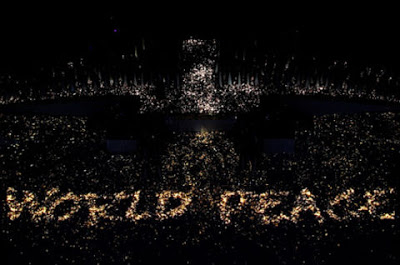 Emblematically, the words “World Peace” form the fire from which the Phoenix is rising, signifying that it is through the removal of peace from the earth that Satan will establish his kingdom. Satan will bring such bloodshed, war, famine, suffering and calamity to the earth that all mankind will cry out for a savior to deliver them. Satan’s man will then be presented, offering peace to the world.

On February 17th, 1950, James Paul Warburg, son of Paul Warburg who was a driving force behind the establishment of the Federal Reserve System, spoke the following before the United States Senate:

Henry Kissinger spoke at the Bilderberger Conference, Evians, France, in 1991. During his speech he stated:

Today, America would be outraged if U.N. troops entered Los Angeles to restore order [referring to the 1991 LA Riot]. Tomorrow they will be grateful! This is especially true if they were told that there were an outside threat from beyond, whether real or promulgated, that threatened our very existence. It is then that all peoples of the world will plead to deliver them from this evil. The one thing every man fears is the unknown. When presented with this scenario, individual rights will be willingly relinquished for the guarantee of their well-being granted to them by the World Government.

It must be understood by Christians that the establishment of a one world government is not the scheme of a cabal of super wealthy men and women. Satan is the author of it. He desires to unite all mankind under his rule as an act of usurpation and rebellion against Yahweh. Ever since the scattering of mankind at the Tower of Babel, the devil has been laboring to unite mankind that he might openly declare his rule over all.

The phrase “E pluribus Unum” which is found on the money of America is a declaration of Satan’s plan. This Latin phrase is translated as “Out of Many, One.” Yahweh took a single race of men with one language and purpose, and divided them. He confused their languages, giving to mankind a variety of tongues, that they might scatter into families, tribes, and nations. Satan, ever the rebel, is seeking to unite the nations again. 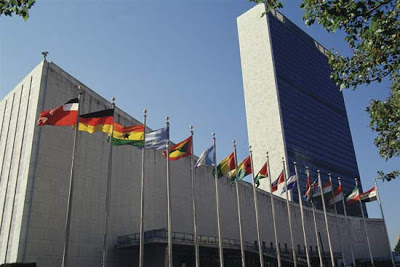 The existence of the United Nations serves as a testimony to the lateness of the hour and the closeness of the end of the age when Satan will establish his rule over a united mankind.

Revelation 13:3-8
And all the world marveled and followed the beast. So they worshiped the dragon who gave authority to the beast; and they worshiped the beast, saying, “Who is like the beast? Who is able to make war with him?” And he was given a mouth speaking great things and blasphemies, and he was given authority to continue for forty-two months. Then he opened his mouth in blasphemy against God, to blaspheme His name, His tabernacle, and those who dwell in heaven. It was granted to him to make war with the saints and to overcome them. And authority was given him over every tribe, tongue, and nation. All who dwell on the earth will worship him, whose names have not been written in the Book of Life of the Lamb slain from the foundation of the world.

It is hard for my mind to conceive that I am living in that hour when those things prophesied 2,000 years ago by the apostle John must be fulfilled. I do not doubt that your own mind grapples with the reality of these things. Yet, the signs are all being fulfilled. The world is marching toward a fulfillment of things prophesied long ago. As Christians, we need to understand the hour we live in.

A sister in Christ (Thanks Dianne) recently sent me a link to a children’s book that is in print at this hour that focuses upon President Barack Obama. Everywhere one looks they are being met with the evidence that the plans of Satan are nearing completion. 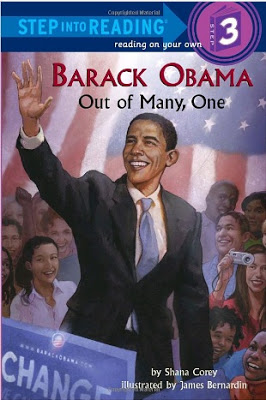 Out of Many, One (Available on Amazon)

It has been previously noted in this blog that the day the results of the election were announced for President of the United States in 2008, the Illinois Pick Three lottery came up with the winning numbers 6 – 6 – 6. Barack Obama’s campaign headquarters in Chicago had the zip code 60606. The Secret Service has nicknamed the limousine that the President rides in as “The Beast.” Such things are not Internet rumor. I have verified each item personally, and have shared links in previous posts where readers might validate the information themselves.

For those who are interested in the symbolism of the other lottery results that same day,  the number seven denotes fulness of time in Scripture, and the number 9 denotes judgment. America has reached its end of days as a free nation. She has been given into the hands of brutal men skilled in destruction. Tragically, much of the church goes on unaware of the hour they live in, or the terrible events that are even now at the doorstep.

Do not be swept away with the flood of deception and corruption that Satan is spewing forth. Seek Yahweh now. Surrender your life to the leading of His Spirit. Begin to experience what it is to be led of the Spirit in your daily life and every decision. Invite the Father to lead you on that narrow path that leads to life, of which Christ testified there would be few who would find it.

I would correct a statement I made in the post titled Super Bowl XLVI – Strange Flesh and Giants. I had mentioned that the stage resembled a spaceship that landed atop a pyramid in the movie Stargate. This statement inadvertently led some on a wild goose chase as they sought to provide pictures for me of the spaceship in that movie. Seeing the images, I realized I had wrongly identified the movie in which I had seen this image. The actual movie was Dune. I have provided the pictures below to show the similarity. 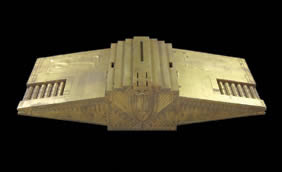 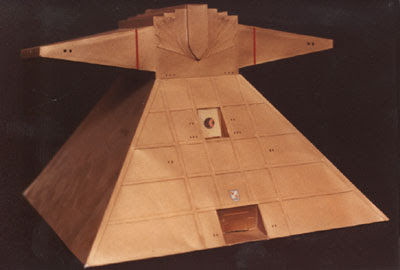 Emperor’s Ship on its Base 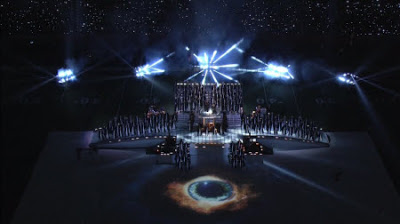 In the movie Dune, the Emperor Shaddam (Satan), ruler of the known Universe, arrives in a ship that rests atop a pyramid, paralleling that image which Satan has employed to represent his rule over the world.