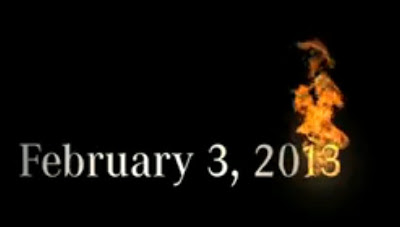 A reader posted a link to a teaser commercial for an upcoming Super Bowl commercial. He asked me to share my thoughts on it. I had just a short time earlier read an article that made reference to The Day The Music Died, an expression describing the date in 1959 when Buddy Holly, Ritchie Valens, and The Big Bopper died in a plane crash. When I saw the Super Bowl Commercial my memory was triggered, and I realized that this upcoming ball game, the biggest televised spectacle of the year, will be held on the anniversary of this event.

I believe it was the Father’s will that I make this connection that I might understand what is being signified in the commercial, and receive a further witness of what the year 2013 portends. Note in the image above that the only part of the date going up in flames is the number 13, denoting this present year.

I am including a link to the video below. If you are reading this on the web, the video is embedded in this blog post. Before viewing it, let me alert you to some things to watch for. The video shows a New Orleans’ café. New Orleans is noted for its wickedness. Yahweh twice struck the city in 2005 when Hurricane Katrina (Purity) and Hurricane Rita (Pearl, denoting purity), both struck the city, breached the levies, and flooded large sections of New Orleans. This occurred three days prior to Southern Decadence being held which is a large debauched, homosexual festival that celebrates perversity (not diversity). New Orleans leads the nation in murders per capita. It is truly a Satanic city.

In the video you will see a Jukebox power up and begin playing a song. The song selected is by The Rolling Stones, and is titled Sympathy For The Devil. The only lyrics you will hear in this commercial are the following:

Please allow me to introduce myself
I’m a man of wealth and taste
I’ve been around for a long, long year
Stole many a man’s soul and faith

That something beyond an automobile is being announced here is evident. This is a highly unusual song selection for a car advertisement. Satan, through the corporate and media masters of this world, is conveying a message. The only spoken words in the advertisement are the following:

Some things I have observed are the following. The commercial shows a nearly deserted street in what appears to be the French Quarter of New Orleans. This area is normally a hub of party-goers and festivity, yet there is no gaiety, no celebration taking place. This is also striking in the fact that the date of February 3, 2013 is featured, a date when New Orleans will be running over with Super Bowl revelers. In a sense, the music has died.

The ad then shows a Doberman Pinscher barking, and snarling viciously outside of the café window. Doberman’s are noted as watch dogs. Dogs have a keen sense of danger. It has often been reported that dogs will act threatened in the presence of some demonic influence. The dog’s actions indicate that a threat is present. 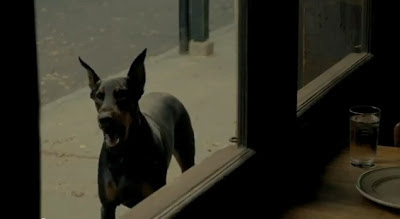 The doors then blow open and wind rushes in, being revealed by the swirling leaves on the ground. Spiritual forces are often symbolized by the wind, and in this case it is an evil wind. The leaves that enter the café are dead, for it is winter time. Death enters the room. 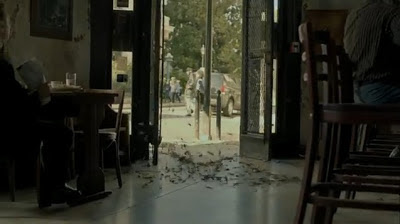 The patrons inside recognize something unusual is occurring. They turn their heads to look. The Jukebox, which was off, seemingly without power (another reference to the music dying), mysteriously comes on. That this is unusual is revealed in the face of the young woman who apparently works at the café. The song Sympathy For The Devil begins to play, revealing who it is that has entered.

The advertisement then switches to a close-in shot of the front of an automobile. Just one headlight is shown, a reference to the single all-seeing-eye atop the Illuminati pyramid symbol. The frame around the light bears some resemblance to the Egyptian Eye of Horus/Osiris.

Bear in mind again, that the only words spoken, conveying the esoteric message of this ad, are:

We then see the date on the screen, and the number 13 going up in flames. The number 13 is sacred to occultists and the Illuminati. As mentioned in the Dragon Flood series, America’s founding fathers, largely Freemasons that met in Boston’s Green Dragon Tavern owned by Masons and which contained a lodge in the upper floor, chose to feature the number 13 prominently in all of their national symbols. They did this despite the fact that this number was considered evil the world over.

It requires 13 witches to convene a coven. The United Nations building in New York is 39 stories tall, and is divided into three sections of 13 floors. 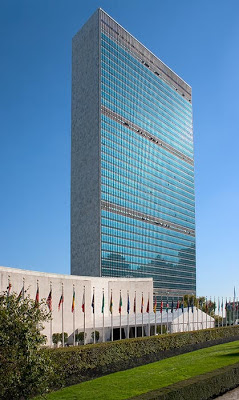 Under the video which was officially posted by Mercedes Benz to YouTube, the following description is given.


In an old New Orleans cafe, a powerful force is undeniably present. What it is won’t be revealed until the Super Bowl. Will you be watching?

It is evident that the “powerful force” in the commercial is Satan. This “teaser” commercial is stating that Satan will have some type of announcement to make at this Super Bowl event. This is not unusual, for last year’s Super Bowl that featured Madonna at the half-time show was a tour-de-force of Satanic proclamation. A black mass was performed, and Madonna in a preview leading up to the event stated:

“The Superbowl is kind of like the Holy of Holies in America. So here I am, I’ll come at halfway of the “church experience” and I’m gonna have to deliver a sermon. It’ll have to be very impactful.”

You can watch the interview at the link below:

The following image from last year’s Super Bowl half-time show reveals that this was truly a platform for a Satanic message to be delivered. 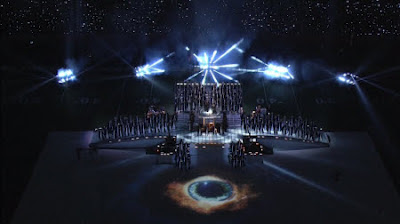 Note the pyramid formed of rays of light on the ground, with the All-Seeing-Eye of Lucifer blazing with fire. You can read more about last year’s Super Bowl here:

This year’s half-time show will feature some of the most overtly Satanic individuals in the music industry; Beyonce and Jay-Z. In 2008 Beyonce revealed that she had an alter ego named Sasha Fierce. This is the persona adopted by the singer as she channels an unclean spirit, becoming possessed by that spirit. The image below of Beyonce/Sasha Fierce reveals whom she serves. 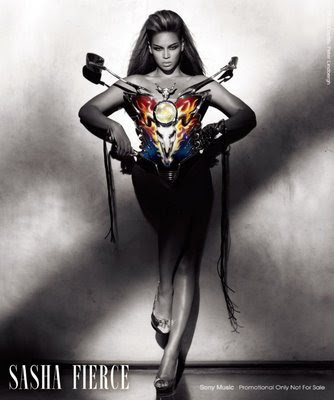 Beyonce is holding what appears to be handlebars and mirrors from a motorcycle with an emblem of Baphomet, the goat headed, dual gender, god that is a symbol of Satan. This reveals that Beyonce is a vehicle of Satan. She is a chosen spokesperson of Baphomet, a purveyor of sin and unrighteousness. 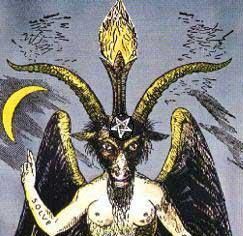 Many people trace Beyonce’s turn to Satanism to her husband Jay-Z. 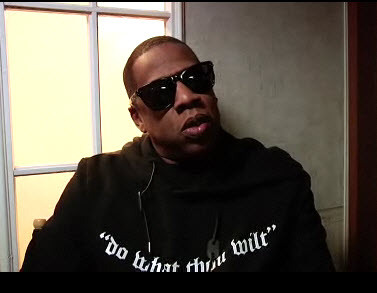 Jay-Z with “Do what thou wilt” Jacket

The expression “Do what thou wilt” is attributed to Satanist Aleister Crowley as the guiding principle of Satanism.

Satan has his chosen disciples in place to preach whatever dark message he has chosen for the world at this time. That something will be announced on this day is apparent.

Considering the fact that this Super Bowl will feature two brothers as head coaches opposing one another, it seems evident that civil war is near at hand. The image of the number 13 going up in flames indicates that the fuse will be lit this year. That this Satanic event and announcement is being made on February 3rd indicates that America is fast approaching the hour when the music will die, and joy and mirth will flee.

Isaiah 24:5-12
The earth is also polluted by its inhabitants, for they transgressed laws, violated statutes, broke the everlasting covenant. Therefore, a curse devours the earth, and those who live in it are held guilty. Therefore, the inhabitants of the earth are burned, and few men are left. The new wine mourns, the vine decays, all the merry-hearted sigh. The gaiety of tambourines ceases, the noise of revelers stops, the gaiety of the harp ceases. They do not drink wine with song; Strong drink is bitter to those who drink it. The city of chaos is broken down; Every house is shut up so that none may enter. There is an outcry in the streets concerning the wine; All joy turns to gloom. The gaiety of the earth is banished. Desolation is left in the city…

Ever since Barack Obama’s first presidential inauguration a great emphasis has been laid upon Don McLean’s hit song American Pie. The greatest show on earth will be held this year on the anniversary of the event Don McLean sang about. To understand what is coming upon the earth, one need only consider the lyrics of this song. Consider the following lines of this song, and how they relate to fires of destruction.

So come on, Jack be nimble, Jack be quick
Jack Flash sat on a candlestick
‘Cause fire is the devil’s only friend


Oh, and as I watched him on the stage
My hands were clenched in fists of rage
No angel born in Hell
Could break that Satan’s spell

Don McLean understood that he had received these lyrics from a divine source. The label of the 45 record on which this single appeared contains the words “Mayday Music” and “Yahweh Tunes.” 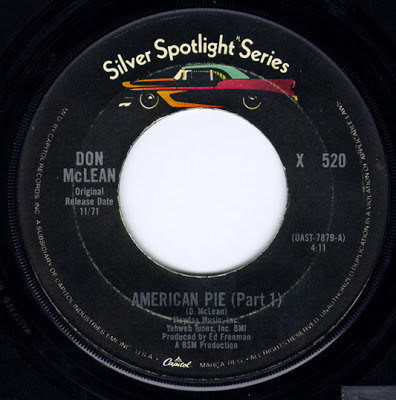 At his first inaugural celebration, President Obama joined 500,000 Americans in front of the Lincoln Memorial and sang the words of this song.

Hosting this event in front of the Lincoln Memorial signifies that a new time of civil strife is coming to America. Once more the nation will experience great slaughter as brother takes up arms against brother. As it was in Lincoln’s day, so it will be again as America is torn asunder by political and social strife.

February 3, 2013 is a day to watch. It is a day to be sober. It is a day full of signs. The world will watch brother warring against brother. It will all occur on The Day the Music Died.

For those who missed the link to the video showing the Harbaugh brothers at a Civil War re-enactment, I will include it here.

Following are the full lyrics to the song American Pie.