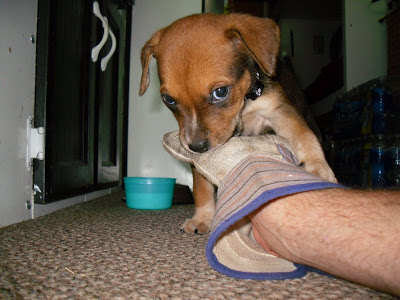 Champ the Chewer
(click on any image to view larger)

What a difference a week can make in the life of one of Yahweh’s creatures. When I found this abandoned puppy he was covered with fleas, his tongue and gums were white from anemia, and he could hardly walk more than a few feet before falling down. In the past week his color has returned, he is enjoying life without the torment of fleas, and he is full of energy. Of course, being a puppy that is still probably less than 6 weeks old, he does sleep a lot.

The article I posted about the Father leading me to this abandoned pup resonated with a lot of people. There was a definite up-tick in the number of e-mails I received on the post. I also noted that there were approximately 20 new people who subscribed to the Parables Blog after I wrote about finding Champ. I am sure that many of those who signed up were unaware of the subject matter commonly discussed on this site for just as soon as the next two posts came out the subscriptions decreased by the same amount.

I believe that says a lot about the state of the church today. Masses of Christians will happily read about a man with a dog, but when the same author writes about the cost of Christian discipleship, of holiness and judgment, the pews clear out as if someone had set a fire in the sanctuary.

Despite the risk that some might think this is a pet blog, I thought I would provide an update on Champ’s welfare as many have expressed an interest in him.

Champ is eating very well for a puppy. I continue to give him baby formula to drink for at his age he would normally still be nursing. He has also developed a healthy appetite for soft dog food. 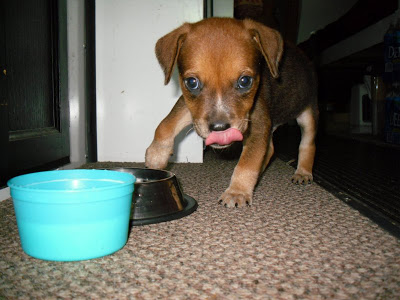 You can see from the photo that Champ now has excellent color in his tongue. I have noticed him eating dirt when he is outside. I did some research on this and found that this behavior is often a sign of anemia and a lack of iron. His anemia is quickly dissipating, and there is iron in the infant formula he is drinking, so this should pass quickly.

Champ likes to sit on the bench beside me during the daytime when I am working on the computer. He sleeps much of the day there. He is a bit clingy, and there are times I need to attend to other activity. I cannot leave him down on the floor as his bladder is small and he is too young to be housebroken. I spent one morning considering purchasing a pet crate to put him in when. The plastic container I used the first days of his sojourn with me was a temporary measure.

I debated whether I should spend the money (about $50) to acquire a pet crate. My mind argued that there are many people in need, and the money could be better spent elsewhere. I have learned, however, that being led of the Spirit, and being led of the rational arguments of the soul of man, will often lead to very different conclusions. Some objected when a woman broke open a very expensive jar of aromatic nard, and poured it over the head of Yahshua. They reasoned that this very expensive ointment could have been sold and the money put to better use caring for the poor. Yahshua, however, defended the woman’s actions, and testified that what she had done would be reported whenever the gospel was preached (Mark 14).

I am aware that purchasing a dog crate and anointing the Messiah for His burial are two very different things. Nevertheless, the principle of being led of the Spirit rather than directed by the reasoning of the natural mind remains the same. Yahweh often approves that which man would disapprove, and vice versa.

I suppose the Father wanted me to have no doubt regarding His will for me to keep this dog and care for it, for just a few hours after I placed the order for the pet crate I received the following e-mail from a sister in Christ.

Congratulations on your new baby 🙂 – that first picture is fantastic, what a face!  Babies are absolutely exhausting but all the time and energy and love and joy and teaching you put in turns out to be some of the best things you ever did!  Thank God for His Grace!  For puppies I recommend crate training – an enclosed “pet taxi” with his bed in it for the times when he is unsupervised.  The theory is that they will not go to the bathroom in their bed.  You still have to get up 2 or 3 times a night to take them out.  They may have accidents in their beds if they have diarrhea or you do not take them out at night, but this doesn’t happen very often.  Then just like a baby he can have his morning time outside with you or in a little pen and playtime and cuddle time and also down times or nap times in his crate (put chew toys/rawhide in for when he’s in but awake)(and you get some time that you don’t have to keep a constant eye on him :).  Eventually he’ll be able to make it through the night but I usually make them sleep in there at night for at least several months.  Then if you need to leave him unattended while you go somewhere he’ll be used to going into his comfy bed with his toys and all your things won’t be chewed up when you get back!  None of our dogs has a crate now, they sleep where they want to at night and I leave them in when we go somewhere without worrying about anything…

Take Care, make sure you get a crate that allows for growing room :), M.

This sister also sent a gift of $50 through PayPal, almost the exact amount that I had spent on a pet crate a few hours earlier. It is marvelous when the Father affirms His will in such a specific manner. 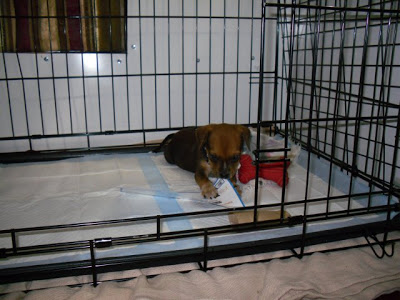 The crate has a plastic bottom so moisture will not penetrate to things underneath. Champ has taken quite well to the crate already. I can generally put him in it a couple times a day for an hour or two, which permits me to get things done that I could not do if I had to watch him constantly.

I have just started to leash train him. He thinks he has mastered the leash already, for he tries to take me on walks. 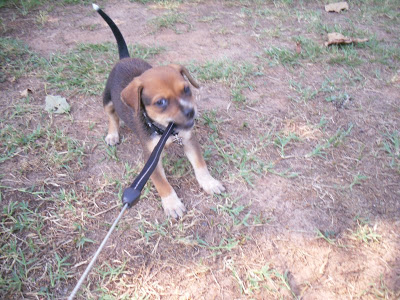 As you can see, I have my work cut out for me. He is very self-willed, but then he is still a babe. We too begin our walk with the Lord being very self-willed. How many of us have not grabbed hold of the leash and tried to induce God to go where we wanted to go? Yahweh is certainly showing me many parallels between the Christian life and life with Champ. I am learning to be patient, yet consistent, in my actions toward Champ. I am extremely grateful for the patience Yahweh has shown to me throughout my life. As a son, I have been slow to learn many lessons. I have been self-willed. My Father in heaven has been very patient with me and I consider it a great opportunity to be able to demonstrate this same patience toward others.

In my opinion, dogs are actually easier to manifest patience toward than people. It is important that we manifest the Spirit of Christ in all realms of life, whether toward an animal, or toward another child of God. As Christ stated,

If I prove myself faithful in showing patience, mercy, self-control, longsuffering, and gentleness with a dog then there is hope that I might manifest the same fruit of the Spirit in my interactions with men and women. Yet, if I cannot be faithful in that which is a small thing by comparison, then there is a high probability I would not be faithful with greater things. 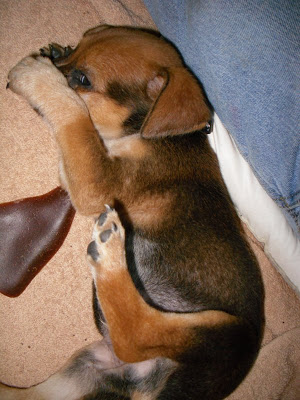 Proverbs 12:10
A righteous man has regard for the life of his animal, but even the compassion of the wicked is cruel.

One brother wrote to me and shared the following:

It has been proven in tests that dog owners live healthier lives. Having a dog increases the oxytocin levels in your brain. It also does the same thing for the dog. It is a mutual tranquilizer for both dog and owner. Petting the dog is soothing especially when stress levels are up, or perplexity is at hand.
I believe there is definitely an aspect where a person’s physical health can be positively impacted through interaction with a pet. I find it to be a very soothing thing to pet a dog, or to interact with one. A Wikipedia article on human – animal bonding shares the following:

In 1980, a team of scientists at the University of Pennsylvania found that human to animal contact was found to reduce the physiological characteristics of stress; specifically, lowered levels of blood pressure, heart rate, respiratory rate, anxiety, and tension were all found to correlate positively with human–pet bonding.
[Source: http://en.wikipedia.org/wiki/Human_bonding#Human.E2.80.93animal_bonding]

I’ve always liked a good dog story. You can find one at the following webpage. The story will most definitely pull on your heart strings.

According to some sources on the Internet, oxytocin levels are increased in humans by making eye contact with a pet. Get ready to have your oxytocin boosted. 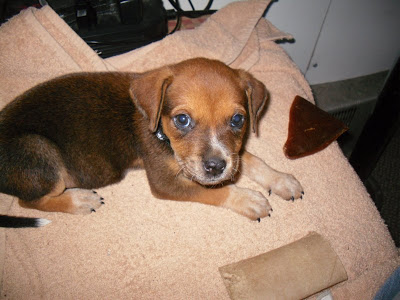