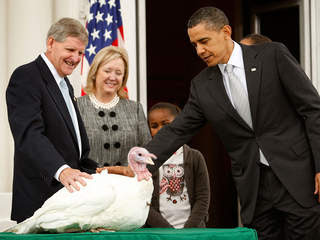 Four or five brothers and sisters sent me a link to a story about the death of the turkey Barack Obama pardoned last year, as the President traditionally does before Thanksgiving. The details of this story readily lend themselves to viewing as a spiritual parable. Following are the details of what happened.

Peace, one of two turkeys pardoned by President Obama last year, was euthanized Monday, according to an official who insisted the timing of the death – days before the Thanksgiving holiday – was not suspicious.


Rebecca Aloisi, vice president for marketing at the Mount Vernon Estate, confirmed that Peace had been dead after a weekend “illness.” But Aloise knew neither the nature of the illness, the manner of death, nor what had been done with the remains of the large, edible bird.


“I appreciate where you’re going with this,” Aloisi told CNN. “But I assure you that these birds are extremely well cared for.” The decision to euthanize the bird was made by a veterinarian in consultation with Mount Vernon’s livestock department, she said.


Peace had served as the understudy for Liberty, another turkey, at the 2011 pardoning ceremony by President Obama. Obama chose to pardon both birds to spare them from the fate of the plate…


At the Nov. 23, 2011, pardoning, President Obama said Peace was “going to retire to a life of leisure at Mount Vernon – the same place where George Washington spent his golden years.”

To summarize what is symbolized here. In November of 2011 Barack Obama said that Peace would live a long and happy life. Peace however, fell ill a few days prior to Thanksgiving 2012, and was euthanized. That is to say, Peace met its end at the hands of men.

We are told that Peace was the “understudy” for another bird named Liberty. I suspect that Liberty will also fall sick before long and it too will meet is demise at the hands of men. There have been other signs pointing to a removal of peace from the earth. This past May the National Christmas tree died of “shock.” The tree was located on “the pathway of peace” on the National Mall in Washington.

Right after this story appeared, there was another news article about the basketball player named Metta World Peace being ejected from a game due to his violently assaulting another player.

This is now a third testimony of peace dying, or being removed from the earth, that has occurred in 2012.

II Corinthians 13:1
Every fact is to be confirmed by the testimony of two or three witnesses.

I would also like to share with you a video sent to me by a sister in Christ. It is a remarkable testimony of a man in California who ministers among the homeless. I was reminded of a brother and sister in Macon, Georgia who are performing a very similar ministry among the homeless. They have given all of their substance in ministry to “the least, the last, and the lost.” Such ones will be richly rewarded in the age to come.

Proverbs 19:17
He who has pity on the poor lends to the Lord, and He will pay back what he has given.