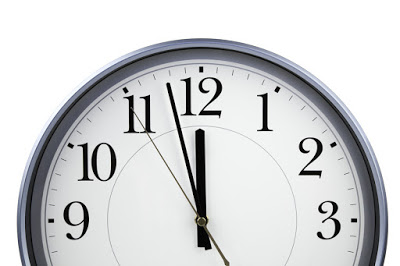 Time. It’s a requirement for what I have proposed to do. Translating a new Bible with all of the changes I have set forth is a time intensive task. I have been taking some steps to begin this task already. I have been checking out software, both Bible software and editing software. I have ordered some which has added a delay to the task, and I have downloaded some onto my PC direct from the Internet.

Beyond this, I have hooked a second monitor up to my PC to give me the workspace I desired. My efforts have led to an expense as my first video set-up with dual monitors was causing my computer to occasionally crash. I was afraid that it would crash at a point where I would not like to lose the labor I have done on the Bible translation, so I ordered a new video card to hook both of my monitors to a HDMI connection. That has now been taken care of.

On top of this, my Internet access has been down for portions of 4 days recently. Problems and advancements on the local DSL network have taken a toll on the Internet’s uptime. Today it is out, also. This too has caused me some delays, but during all of it I have been making progress. Following is a photo of my computer with dual monitors hooked up. 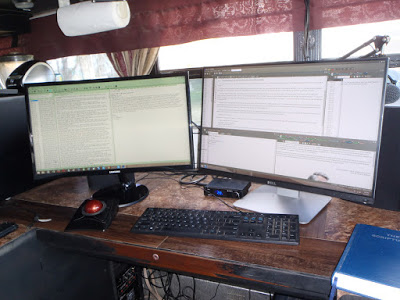 During my time I have made some decisions regarding aspects of the Scripture translation job I am going to work on. I have decided to forego chapters and verses. This, I have learned, is a type of book called a “Readers Bible.” Some popular ones are the English Standard Version Reader’s Bible, and the Bibliotheca. Also, the New American Standard Bible has a version without chapters and verses on Kindle. There is a copy of the New King James Version and the King James Version also. Likewise the World English Bible is available in various formats without chapters and verses. I am sure there are more, but those are the ones that stand out to me. Seeing that the invention of chapters and verses in the Bible is only about 500 years old, I am in favor of putting it back to its original character as a group of books.

Looking at the Bibliotheca (www.bibliotheca.co) I was surprised to learn that it was a Kickstarter funded project. The creator of the project expected 500 would be necessary to pay for it, at a cost of $37,000. He was blown away when he was able to raise $1,440,385 on Kickstarter. Since then he continues to sell them via his webpage. The Bibliotheca is basically an American Standard Version from 1901. This book was chosen because it is now in the public domain. Also, it was chosen for its literal accuracy.

Unfortunately this Bible is not that literally accurate, not having the names of Yahweh and Yahshua, and including the myths and fables of an eternal hell and Sunday worship. I have in the time allotted been able to view many videos on the Sabbath, and even in the New Testament the saints were meeting on Saturday. It is a shame that Christianity today knows nothing of the Sun worship that went on back then, and how the Roman Emperors forbade the saints from worshiping on any day but Sunday. If you look at any of the 8 accounts in the New Testament that speak of the saints meeting that are translated something akin to “On the first day of the week”you will see that they all included the word Sabbath. It was literally, “one one of the Sabbaths.” Furthermore, there were other words for “week” that the Greeks used. These are but a few of the inaccuracies of the Bible.

It should not surprise people that if Yahweh allowed the Church to be so deceived in her doctrines today, that the Bible has not escaped either. The inaccuracy need not be in the original languages. It is enough to put them in the translations. The translations have very much copied one another for the past 500 years that the printing press has been in use. That is not to say that the men were all corrupt at heart who translated the Scriptures. It just means that error was in force for so long that it was believed by them as well.

I do like the way in which the man has made 4 books out of the Bibliotheca.

As we learned in Yahweh’s Book it was a common practice of the Jews to separate the Old Testament up into 3 groups, the Torah, the Neviim, the Kethubim, or TaNaKh. The New Testament follows as a 4th book. Whether I will set forth the Scriptures as 4 books, I am not sure at this time, but I would like to have the 4 sections marked out.

Another reason for the exclusion of chapters and verses is to instill the original thought of the book. For example, the book of Acts has 6 sections that each end with some form of the phrase “and the word of the Lord continued to spread and flourish.” 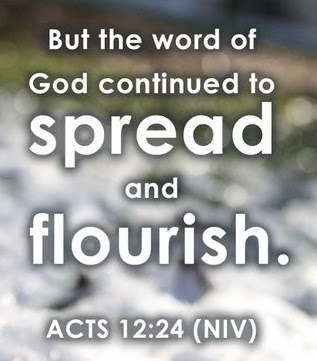 These are a few of the things I have been thinking about. May you be blessed with peace and understanding in these days.