Affirmations to Expect the Unexpected

Following are several responses I have received to the recent article regarding what to expect in 2015. The first is a comic strip that a brother sent me with the following note.

Someone that wrote this comic must read your blog! 🙂

The following is an e-mail I received from Frank, a brother in Christ.

Had a prophetic dream the other night that seems to fit into your recent word about expect the unexpected. My son had me watch this movie that somewhat confirmed it, it is called “Take Shelter.”

The movie is about a guy who gets these reoccurring dreams of a disastrous storm he prepares for it and everyone thinks he is crazy, then so does he but then this storm comes when least expected. Very good movie.


Then I had a friend at work with herpes of the eye that also confirmed part of it. He may go blind and this leaves a scar across his forehead.


The dream I had was about a rapture like scenario during great persecution like a great flood. Very few had been preparing, severe persecution came and many were swept away. After the departure I tried to find my way back. I saw a long line of blinded men with their eyes seared over. The thought of how this happened was that of the addiction we have of looking at screens. Distraction from hearing the voice of God. Also those staring at gambling machines as if in a trance. And those caught up in pornography. Their eyes seared over, blinded by satan.


So the point being, many people are totally unprepared and spiritually too weak for what will occur. It will occur suddenly without warning to those who are not paying attention.

Here is one more letter I received from Randy and Kathy Furman who live in the desert of Arizona. The picture itself will appear unexpected to many folks who are not accustomed to seeing snow in the desert. 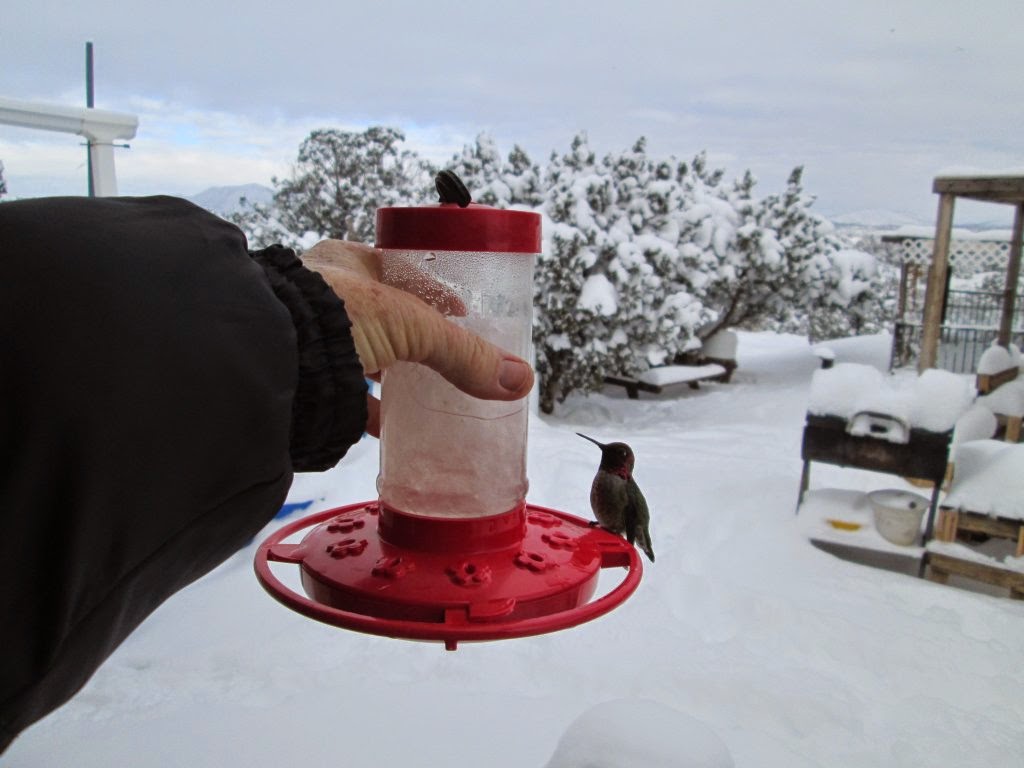 It was in late January or early February after a winter storm about 4 years ago that I was surprised to see a small hummingbird flitting around our front porch.  This was totally unexpected.  And we were completely unprepared.  I went to the basement to hunt up the hummingbird feeder, finally found it, cleaned it up and prepared some sugar water.  I finally was able to hang the feeder, but the hummingbird was no where in sight.  I felt so bad.  I was unprepared.  Shortly after that a young man stopped by.  He was an acquaintance of my son but we had not seen him in over a year.  It was a very unexpected visit.  Randy was able to share several things with him and gave him an open invitation to dinner.  The next day, the hummingbird returned to the feeder.

As we pondered these things the verse came to mind, be ready always to give an answer to every man that asketh you a reason of the hope that is in you with meekness and fear  1 Peter 3:15.  It was a reminder that we needed to be ready in season and out of season to answer questions.  To provide spiritual food, as well as physical food, in the days of famine ahead.

When the above hummingbird showed up this year on New Year’s Eve – earlier than we have ever seen them – we were prepared.  And because we were prepared we were able to enjoy a unique close encounter…

Be blessed and continue sharing the lessons that the Father gives you.


On a final note, I will share a news story that a sister in Christ sent to me yesterday. It both shows how suddenly the unexpected can happen, while also demonstrating that Yahweh is quite able to care for His people when calamity is occurring all around them. The news article does not mention whether the man involved in this wreck was a Christian. However, it does mention him praying as he was caught up in this chain reaction wreck on I-84 in Oregon. I have no doubt that God set His angels charge about him, and this alone explains his miraculous escape. 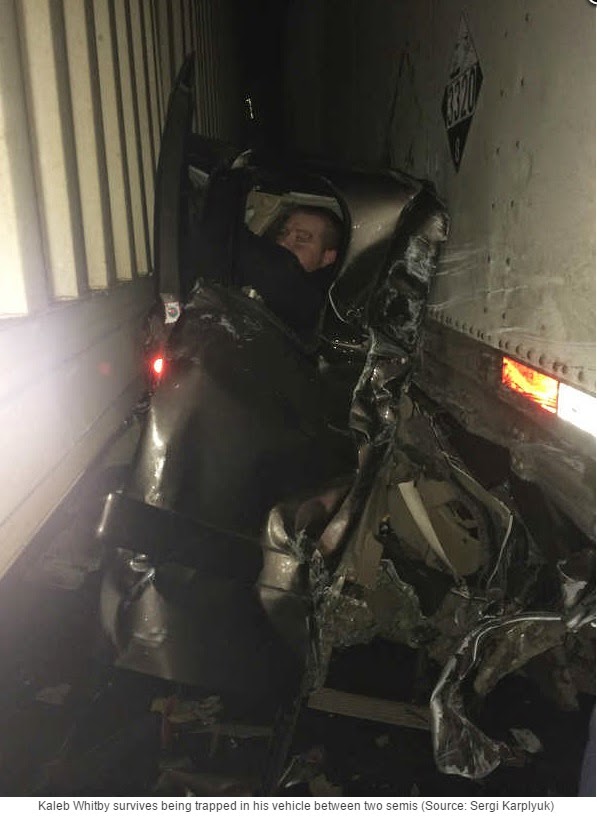 
Oregon State Police say fog and black ice were the causes of  a multi-vehicle crash Saturday morning, along I-84.


Oregon State Police say fog and black ice were the causes of  a multi-vehicle crash along I-84.


The crash occurred near Baker City and closed down all eastbound lanes for hours. ODOT and emergency personnel were at the scene.


According to Oregon State Police, the crash happened a little before 5 a.m. It was estimated that 26 vehicles were traveling eastbound on black ice when they collided.


Police said this caused the eastbound lanes to be blocked and approximately 50 vehicles were blocked in the crash scene.


Kaleb Whitby was one person injured in the crash. Whitby was traveling eastbound on I-84 when he saw brake lights through the fog. He said he saw the semi-trunk in front of him start to sway and then it jackknifed. Whitby wasn’t able to brake in time and hit the semi-truck.


“That ended up pushing my back end out into traffic,” said Whitby, “and there was a semi that was behind me and he ended up hitting my bed, which folded that underneath the first truck and my nose underneath his truck.”


Whitby and his truck ended up sandwiched between the two trailers.


“I was just praying, this can’t be my time and just hoping that everything would be OK,” said Whitby.


Miraculously, the only part of the truck that remained somewhat in tact was the driver’s seat. Whitby was taken to the hospital, only as a precaution. Amazingly, he suffered only a cut above his eye and a few scratches. 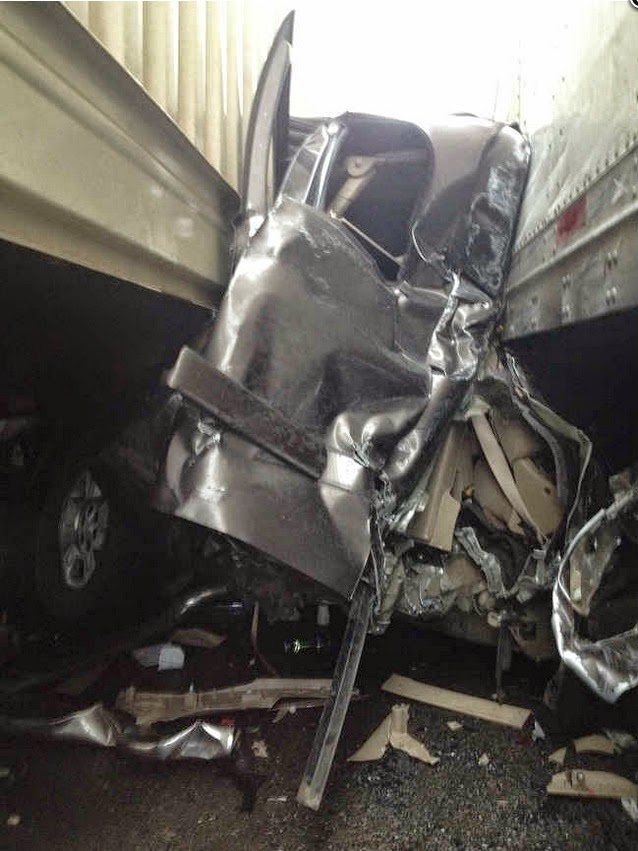