I want to mention a singular phenomena that occurred when the earthquake struck Christchurch, New Zealand this week. In instance after instance, the  bell towers collapsed on prominent churches, some of which were historic landmarks. 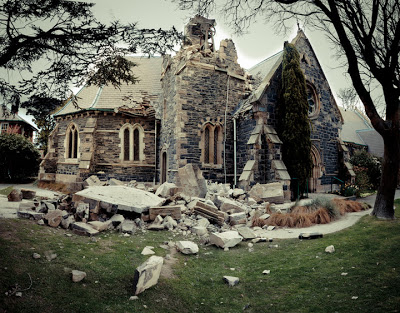 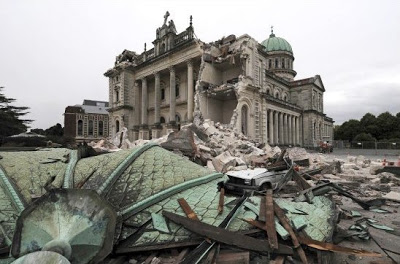 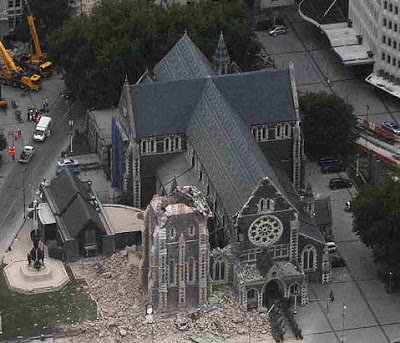 While meditating upon this event, I was reminded of the song American Pie, which the Father has been speaking much through recently. In this song there is mention of the church bells all being broken. Following is an excerpt.

And in the streets: the children screamed,
The lovers cried, and the poets dreamed.
But not a word was spoken;
The church bells all were broken.
And the three men I admire most:
The Father, Son, and the Holy Ghost,
They caught the last train for the coast
The day the music died.

This song had some very poignant prophetic references from its very first release. The record label it was released on contained the words “Yahweh Tunes,” and “Mayday Music.”

Mayday is the internationally recognized distress code. This song was released 40 years ago, in the month of November. 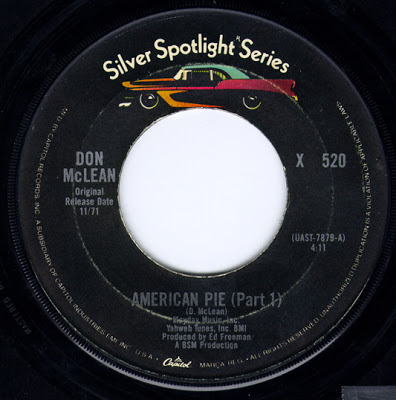 Forty is a number denoting trials and testing, as well as the judgment of Yahweh. During the flood of Noah it rained 40 days and nights. Readers of this blog know that the Father has been speaking to me, as well as many others, about preparing an ark in preparation for the judgment to come. I have referred to the bus I recently renovated as an ark. It is a mobile habitation for use in days of judgment.

In an earlier post I wrote of the significance of the song American Pie being performed at Barack Obama’s inauguration ceremonies in front of the Lincoln Memorial. Why choose a song whose chorus repeats “This will be the day that I die,” for what was supposed to be a festive and merry event?

I believe the Father is testifying through these events that judgment is at hand. A great shaking is coming to the nations. The shaking will test all that the church has built. Much will crumble. Many lives will be tragically lost. The faith of multitudes will fail, for it is not sufficient to carry them through coming days.

I was gripped by a photo I came across yesterday as I was researching the aftermath of the Christchurch quake. It was a picture of a man and his two children grieving right after police informed them that there was no longer any possibility of finding anyone alive under the rubble of a collapsed building. The children’s mother was in the building, and the grief and pain is evident upon their faces. 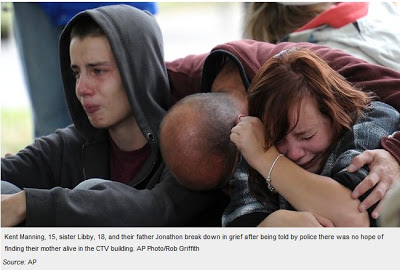 My heart is very heavy when I consider the grief, the sorrow, and pain that this family is enduring. It is also heavy as I consider that this same grief will be multiplied astronomically in coming days as judgment falls upon the nations, and especially upon the house of God

A sister wrote to me this morning to share with me an update on the news out of Christchurch. It was reported that 22 people who were inside Christchurch Cathedral when the quake struck were all thought to be dead. The number 22 stood out to this sister, as it does to me, for it denotes flesh cutting. The Spirit is crying out:

Revelation 18:4-8
“Come out of her, my people, lest you share in her sins, and lest you receive of her plagues. For her sins have reached to heaven, and God has remembered her iniquities. Render to her just as she rendered to you, and repay her double according to her works; in the cup which she has mixed, mix double for her. In the measure that she glorified herself and lived luxuriously, in the same measure give her torment and sorrow; for she says in her heart, ‘I sit as queen, and am no widow, and will not see sorrow.’ Therefore her plagues will come in one day – death and mourning and famine. And she will be utterly burned with fire, for strong is the Lord God who judges her.

People of God, the body of Christ has lived sensuously. Rather than following the pattern of Christ and the early disciples, the church has made many accommodations for the flesh. Rather than crucifying the flesh, the flesh has been pampered, petted and pleased. The Spirit is entreating the people of God to come out of this Babylonian religious system, this harlot with all her loves that compete with the love of Christ.

Those who remain inside, will not escape when the judgment strikes. Surrender your life now to the direction of the Spirit of Christ. Lay aside worldly pursuit and set your affection squarely upon Christ. Depart from sin. Embrace a life of faith where you hear the voice of God and obey. May we all avail ourselves of the grace of God while we have the opportunity.

Note: Peter Boag, a brother from Christchurch notified me that the picture I had labeled as “Unidentified Church Destroyed” was in actuality a municipal building called the Early Provincial Chambers.

Peter also gave me the following report the day after the quake.

As a consequence, the violence, though of much shorter duration, caused a tremendous amount of damage in comparison to the big one last year. Coming at a different time of day, the lunch hour, on a working day, with schools open, and tourists and shoppers about, many were caught up in the horror of the event, and many have been injured or killed, and at the moment hundreds are still missing, trapped under fallen buildings. Emergency services have been working around the clock since it happened to find and rescue those trapped and to treat the injured. Many are without homes and many many more are in shock. There have been about a hundred aftershocks in the last 24 hours, many very strong and unnerving  to an already nervous population, from the more than 4000 aftershocks recorded up till yesterday from the September shake last year. Last year there were no deaths and we had about a month of fine weather to clean up. Last night it rained, as it is again doing tonight as I write, and there is a mounting death toll.

We had all thought that our situation had settled down pretty much since last year, and the city was just getting back to a normality of sorts, when yesterdays’ nightmare shake put us back way beyond the situation existing after the 7.1 magnitude quake of September.

The city is just devastated. Some modern buildings have pancaked. Church buildings have been completely brought down to the ground, and the Anglican Cathedral probably destroyed. The Roman Catholic Basilica has also been very badly damaged. One of the tallest buildings in town, the Grand Chancellor hotel is sinking into the ground, and is expected to fall anytime. Bridges are broken and causing massive disruption to transport, buildings have fallen and blocked streets, and liquefaction has again reared its ugly head causing much water and mud damage.

Probably most of the inner city will have to be rebuilt, as the stresses of so many shakes have taken their toll on many buildings, and consequently their futures are suspect.. Infrastructure is severely damaged and much of the city is still with out power and water and sewer services. My heart goes out to those who are having to deal with this appalling situation and also for the businesses and workers whose lives have been so dramatically affected by this act of God.

Our side of town was not as affected as the city centre was, no doubt because of being more distant from the epicentre. Personally, I didn’t expect to experience another major quake in my lifetime such as we had yesterday, after experiencing the big one last year. However the experts tell us that we can expect the occasional big aftershock for some time to come!

It has been and is a momentous event in the life of our nation, and I am sure is a further sign for God’s Watchmen at this time to interpret, building on the sign given in September last year to those with ears to hear, eyes to see, and hearts to respond.

Blessings to you my Brother and to all who follow your writings,