Psalms 139:23-24
Search me, O God, and know my heart; Try me, and know my anxieties; And see if there is any wicked way in me, and lead me in the way everlasting.

The recent earthquakes in Christchurch, New Zealand revealed hidden faults that no one knew existed. We are in a season of the Father performing a shaking in the lives of His people that He might reveal that which is deficient. The purpose is not to condemn, but rather that they might correct that which is not perfected in Yahweh’s sight and thereby avoid future loss.

The Father has been revealing a similar testimony through means much closer to home for me in recent days. I wrote last week of taking the bus I have been renovating on its SHAKE-down cruise. The shaking revealed some weaknesses and deficiencies that needed correcting. I have been applying myself to make the repairs, and the bus is now much more solid that it was previously. Areas of weakness that I did not know existed have been exposed, and I have thereby been able to take steps to correct them.

I asked the Father to reveal to me any deficiencies that I might avoid extensive damage of incur great cost. He has been faithful to do so. The following picture reveals an area that badly needed addressing. 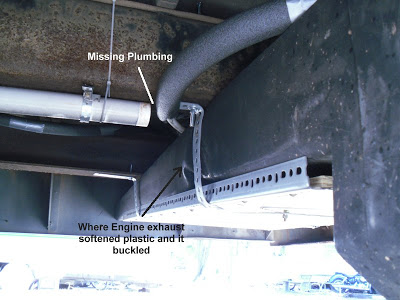 Undercarriage of Bus Where Waste Tanks are Mounted

If you look closely where the arrow is pointing at the bottom of the image, you will see that the plastic on the gray water tank has buckled. I initially thought this was due simply to too much weight sitting on the metal strap that held the tank in place at that point. The Father mercifully showed me that there was a more serious reason for the failure that I might remedy it. He led me to the discovery through a series of clues and gentle direction.

You will notice that there is a piece of white pipe that abruptly ends short of the waste tank. This is the drain line that runs from the sink in the kitchen to the holding tank. Part of the pipe fell off during my shake-down cruise, leaving it as it is. For a repair, I decided to run this pipe directly into the side of the gray water tank to provide a natural gravity flow for the water. Previously I had gone up and into the top of the gray water tank using a hole that was already cut there. This was very poor design on my part, for water does not flow uphill. It ended up trapping water in the pipe, which added weight to it.

When I went to add a coupling to the end of the pipe shown above, I noted that the pipe was slightly out of round. The coupler would not slide over it. I figured it must have gotten hot from the engine exhaust that vents in its direction, though the end of the exhaust is 32 inches away. This permitted the pipe to soften and warp. I cut a couple inches off the end and was able to attach my pipe just fine.

I should have been alerted to a heat problem at that point. Later in the afternoon I wrapped the water hose that I use to hook up to the water supply at the RV park. I had bought a couple 6′ lengths of pipe insulation, and I had about 4 feet left over. I had noted that there was an exposed piece of water line under the bus near the waste tanks, so I decided to use some of the remaining pipe insulation to cover it. When I did, I noticed that the insulation I had previously put on the water line had actually melted.

The engine exhaust was aimed directly at the spot where it melted. I had cut the exhaust pipe off when I mounted the waste tanks as it obstructed their mounting. The exhaust pipe ended just behind the bus’s back tires, and nearly three feet in front of the waste tanks. It was pointed right at them, but I had no idea that so much heat was being vented from the pipe with that much force. Upon closer inspection I realized that the gray water tank had not buckled merely from the weight of water in it, but the plastic had softened due to the heat of the exhaust, causing it to weaken.

This was a very important discovery. The remedy is rather simple. I need to add a length of tail pipe to the end of the exhaust to vent the heat in another direction. Had I not discovered this and taken a longer trip, I could have done much more damage to the plumbing and fixtures under the bus. 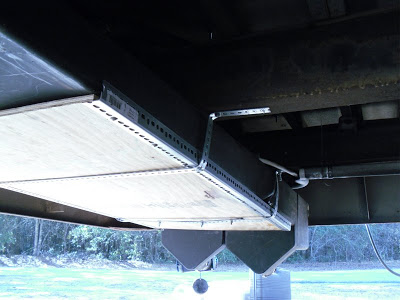 There was still too much weight on the narrow metal straps holding the waste tanks, so I purchased some marine plywood, reinforcing the edges with some angled steel to keep it from warping. As you can see from the picture above, the tanks are now much better supported along their length. I feel much better about the way they are now mounted. It is a more durable set-up. 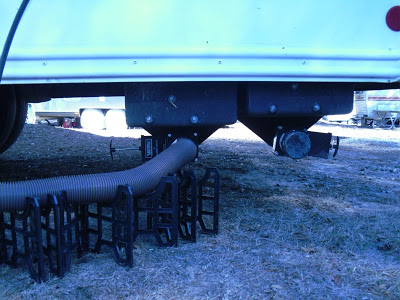 Each holding tank has its own sewage release valve. The one on the left was knocked off during the shake-down cruise when the tank sagged. I purchased a replacement at Camping World and mounted it. I then ran the drain from the kitchen sink into the side of the tank. Everything is now copacetic.

A brother in Christ wrote to me and said he wanted to assist in getting the outside of the bus in order, specifically mentioning helping with the cost of materials for painting. There were some other things that needed addressing on the outside as well. The mirror situation was dismal. It looked like the original mirrors from 39 years ago were still on it. They had greatly deteriorated. I had salvaged a pair of mirrors from the RV in Tennessee. I mounted one on the entrance door. I had to remove the opaque glass in the door first, replacing it with clear Lexan.

I was speaking to Mr. Stanfield, the elderly brother with whom I have often stayed when in Macon. I mentioned to him that I needed to find some replacement mirrors, as well as replacement light covers. A number of them were cracked, or broken. He told me about an old business in downtown Macon from which he used to buy truck parts. I decided to give them a try.

The business was called Georgia Tool. There was a man who worked at this business who had been there over thirty years. The building was not impressive. It was old and run-down, but they had lots of stock and good prices. They had the precise mirrors I needed for less than $11 each. I told the man that the light covers were stamped with the name “Cats-Eye.” He said that was an old company that was sold to another company, which years later was sold to yet another company. He had been at this place of business during all of these transitions. He told me each company’s name. 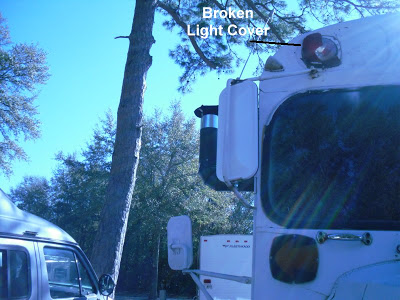 Photo Showing One of the Broken Light Covers and New Mirrors

The man pulled out a catalog and was able to find the exact lights I have on the bus. I had to order them, as 39 year old school bus lights are not much in demand in Macon. Remarkably, though, I was able to order lights exactly like the originals. 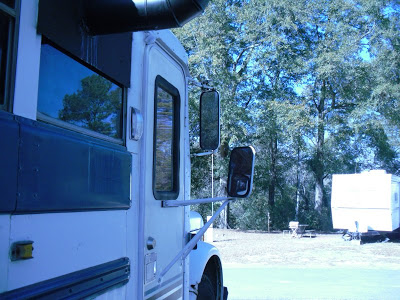 Another View of New Mirrors

The bus is a mixture of things old and new. It puts me in mind of the following Scripture.

Matthew 13:52
And He said to them, “Therefore every scribe who has become a disciple of the kingdom of heaven is like a head of a household, who brings forth out of his treasure things new and old.”

I have also procured the paint needed to paint the outside, as well as foam rollers, mineral spirits, and masking tape. I am putting a ceramic additive in the paint which will go on the roof. It reflects heat, and comes highly recommended by others who have made similar conversions.

I am going back with the original white and blue paint scheme. Many have suggested that I should not keep the cross and flame emblem as it evokes too much of a link to the Methodist church, which has fallen into apostasy. I have to paint over the images anyway, as they are peeling and cracked. Any new design I put on the bus exterior will be somewhat different.

As you can see, I have remained busy. I am confident that the bus is in very solid shape as far as living accommodations now. This is just in time for it to be tested by a winter storm. The forecast is calling for a winter storm to begin Sunday night and run through Monday night with accumulations of snow, sleet and ice. This is pretty big news for central Georgia. I am actually looking forward to it. Arks are made to weather storms. I am eager to light up my wood stove and watch the weather from the comfort and safety of my favorite writing spot. 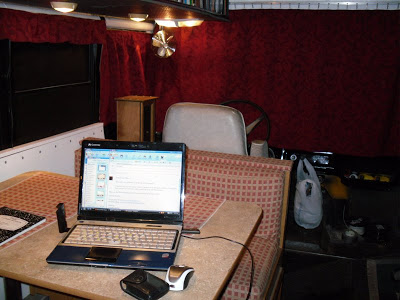 This is where the writing gets done. It looks pretty cozy, doesn’t it? You can see the driver’s seat has been replaced. The one in the bus was in terrible shape. I replaced it with one of the rear captain’s seats that I had removed from the van. The curtain at the front opens so I can watch the snow fall outside. I just caulked the front windshield yesterday, so it will be nice and tight.

A sister in Christ wrote and spoke of my first camping trip in the bus being its “virgin voyage.” I had never heard that phrase before, but I thought surely that must be the intended meaning of the expression “maiden voyage.” We serve a God who makes all things new again.

Revelation 21:5
And He who sits on the throne said, “Behold, I am making all things new.”