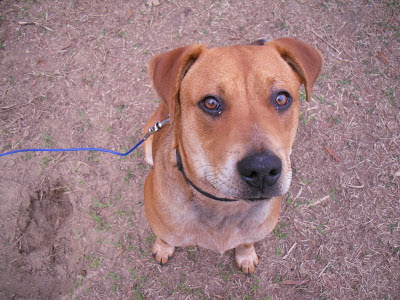 If you are new to this blog, you can find a post on the remarkable way in which Yahweh provided a dog for me in the post at the following link:

The photo above was taken today. Champ is growing up. He is a strong, healthy dog. He is a real musher. When I attach him to the dog jogger on my bicycle, he is so eager to go that for about the first quarter mile I don’t have to peddle at all. I have one of those digital monitors on my bike that tells you speed, distance, and time. From a dead stop, Champ will have me cruising along at about 16 MPH as he eagerly runs down the dirt lanes out here in the country. 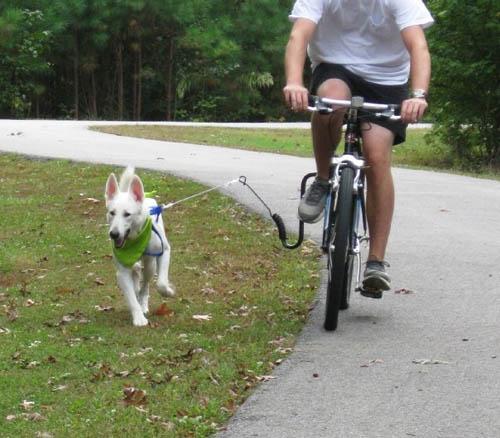 The image above shows the type of Dog Jogger that I use (It is not me or Champ in the photo). Champ and I regularly make a 5 mile circuit down the country roads near where I am parked. All the roads are dirt, and we rarely pass a vehicle.

When I traveled to Mississippi recently for my father’s funeral, Randy Simmons drove down from Macon to check on Champ. Randy only came one day, but that was enough for him to teach Champ the commands to “sit” and “stay.” I was quite impressed when I got back. The photo at the top of the page shows Champ right after I told him to sit. 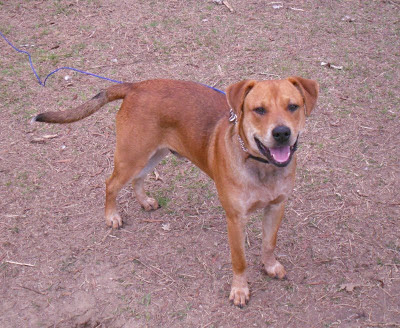 Champ is an outdoor dog. He doesn’t do well inside the bus. He has far too much energy and curiosity, not to mention that he smells like…well, like a dog. He loves it out of doors, and he has had a number of “buddies” drop by to see him since we have been at our present location. You cannot see any of the neighbors’ houses from our location, but there are a few other people scattered around. One young man lives about a quarter mile away and has a purebred Border Collie.

Border Collies are very intelligent animals, and extremely high energy. This particular Bordie Collie was solid black, and female. Champ liked to have her come around. They would play with one another. The Border Collie was a few years older than Champ, and she helped “learn him some manners,” as the saying goes here in the South. She would come and go. Her owner never kept her locked up, or on a leash. Most of the people around here let their dogs roam free.

A few weeks ago two Pit Bull puppies showed up. They were extremely friendly, and appeared well fed. They were making the rounds between various neighbors’ houses as somebody evidently dumped them out beside the road to get rid of them. They were beautiful dogs and they too began hanging out with Champ. 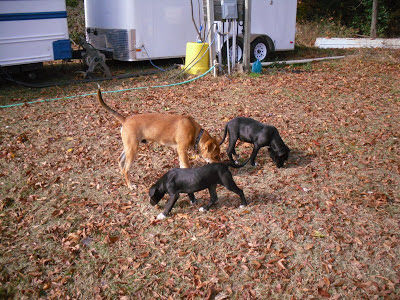 One of the dogs was male, and the other female. Sometimes they would stay for days. I ended up feeding them, and a few nights when it was cold I let them sleep in the kennel with Champ. They all climbed into Champ’s crate together and helped keep each other warm. They too would come and go. About a week ago they stopped coming around, and I thought perhaps they had taken up with one of the neighbors. Three days ago the Bordie Collie also stopped coming around. This was unusual, for although she came and went, she spent a significant part of every day with Champ.

The young man who owns the Border Collie has family nearby. His little sister is around 12 years old (I am guessing). She also has a couple dogs. Randy and Veronica came for a visit last week-end, and we went on a walk, taking Champ with us on the leash. The young girl’s dogs came out to greet and meet Champ, and walked a ways with us before I shooed them back home.

I saw the young girl ride her bike over here yesterday morning. She didn’t see me, but she went over to where Champ was, looked around, and rode back off. This morning her older brother who owns the Border Collie drove over here as well. He looked around and drove off. I realized that he was probably looking for his dog, as he knew she liked to hang out with Champ.

I relayed a message to him to let him know I had not seen his dog in several days, and that I had not seen the Pit Bull puppies in over a week. He said his sister’s two dogs were also missing. He stated one of the neighbors nearby told him some time back that if the dogs ever came on his property he would shoot them. I have heard a lot of shooting recently, so I have little doubt about what happened. Many folks out in the country don’t think twice about shooting a dog. It is a tragic fact, but a fact nonetheless.

I went out to pet Champ and speak to him when I heard this news. A godly man will have compassion on animals. In a previous blog I shared the following Scripture.

Proverbs 12:10
A righteous man has regard for the life of his animal…

It filled me with sadness to think of these beautiful animals being so carelessly slaughtered. They were so full of life and curiosity. None of them were vicious. They were all eager to run up to people, an innocence which likely contributed to their being shot.

I have been thinking about this today. Life is full of lessons, some happy, and some tragic. Randy Simmons and I often talk about Bill Britton’s excellent writing titled The Harness of the Lord. In this writing Bill relates a vision of two horses. Both are running free until they are caught and brought into captivity. One of the young colts rebels against the confinement and breaks free, while the other submits meekly to the training of the master.

As the training progresses, the colt in confinement finds his freedom restricted more and more. First he is left to run about the corral. Then a halter is placed over his head and he has to learn to be led about on a lead. He is brought into the master’s barn, and he learns the discipline of being harnessed and not moving until the master gives a command to move.

The colt that is free cannot understand why his brother does not break free of his confinement. He says it is much better to be free to roam wherever he desires. Yet, his brother remains under the training of the master.

One day a famine strikes the land. The grass withers and the pools of water dry up. The colt that is free is famished, while his brother remains well fed in the care of the master. Then is seen the wisdom of surrendering one’s freedom to the master’s will.

The Harness of the Lord is an excellent writing, filled with insight. It came to mind today as I thought of Champ day after day being restricted in his movements. I have a 100 foot runner that his leash is attached to by a pulley. He can move about a good bit, but he cannot leave the vicinity of the bus where I am parked. I can always look outside and see where he is, being assured that he is close by. Champ would often whine when the other dogs would come around. They had the run of the whole yard, and he often wanted to go play with them. He would especially whine when they would leave. He would see them walking off down the lane and chafe at his confinement. Yet now they have perished and he is alive.

Our Father has been bringing a remnant of His sons and daughters into confinement in recent years. Like Joseph in Egypt, their liberty is taken away while their brothers and sisters live freely, following their own course in this world. Yahweh has directed a remnant to come under harness. He is keeping them on a short leash. Others may go where they want, and live as they please, but they cannot. Yahweh gives them explicit instructions about what they may, and may not, do.

At times this remnant chafes at the restrictions God has placed upon them. They wonder why they cannot share the same liberty and freedoms as their brothers and sisters. I have watched some experience great impatience and agitation as Yahweh continually restricts their way more and more. What they once could do, then can do no longer.

One brother recently spoke of God directing him to give up coffee. He used to start every day by turning on the coffee pot. He would drink coffee throughout the day. He has complained when he sees other Christians drinking coffee, seemingly without any condemnation or conviction in the matter, yet Yahweh will not permit him to do so.

There are a myriad of such examples I could give, for our Father is dealing with each son and daughter similarly, yet with differences. One person can no longer spend money on anything without knowing that it is something God has ordained. Another may have been led to give up television, movies, secular music, or tobacco products. Some are being led to give up all of the above, and more. Yahweh is asking them to surrender their will to His.

Champ may not have understood why he is has been on the leash while his buddies were all running free, but it is because I care deeply for him. He is MY dog. God gave him to me. Even so, God has given you to Christ. He cares for you. He does not want to lose you.

John 6:39
And this is the will of Him who sent Me, that of all that He has given Me I lose nothing, but raise it up on the last day.

We have an adversary in this world. The predations of Satan are increasing. He comes only to kill, steal, and destroy. I can say with confidence that those who refuse to yield their freedoms to Christ and fail to come under subjection to the Spirit will find themselves exposed to attacks of the enemy that they could have been spared. Even as Champ is kept safe by abiding close to me, there is safety to be found in abiding close to the Father. 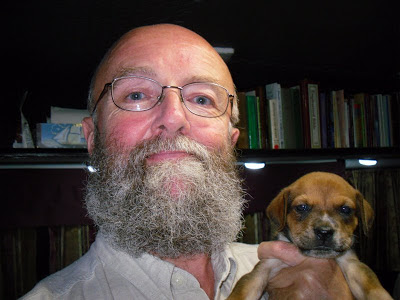 Champ has grown so that I cannot hold him in one hand anymore, but I will always hold him close to my heart.