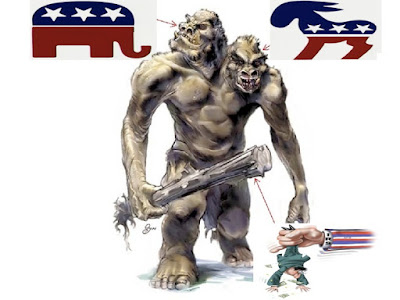 Politics: The 2 Headed Monster
Many people have been writing to me and asking about my thoughts on the Presidential elections. I can only assume that these people do not understand the two party system in the way that I have explained it. I have testified that I have not voted since before Reagan was elected to the Presidency. At that time I realized that whether one was a Republican or a Democrat, that the candidates for President were chosen by the same men, and all were using the same methods to deceive the nation. I would recommend reading the following articles and book.
Christians Have Been Trumped
Christians Have Been Trumped – Part 2
Network of Deception
Lying Liars and Deceiving Deceivers
Dragon Flood
Take time to think about why Donald Trump was a democrat up until the time he ran as the Republican President. The political system is all the same system. Edward Bernays, the nephew of Sigmund Freud, said a century ago:
A presidential candidate may be “drafted” in response to “overwhelming popular
demand,” but it is well known that his name may be decided upon by half a dozen men
sitting around a table in a hotel room.
[Source: Propaganda, Edward Bernays]
Politics is not real. It is fakery, to guide people to make the decisions that they are wanted to make. Some things that are fake: The Moon Landings, Covid 19, Vaccines, Television News, History as Taught in Schools, Evolution, Racism, etc.
Revelation 12:9
So the great dragon was cast out, that serpent of old, called the Devil and Satan, who deceives the whole world…
If you say you do not know where Satan is deceiving the world, then just look. Politics is only one area of a million.
I Corinthians 6:9, 15:33, Galatians 6:7, James 1:16
Do not be deceived.
Heart4God Website: http://www.heart4god.ws