Isaiah 21:9
Now behold, here comes a troop of riders, horsemen in pairs.” And one answered and said, “Fallen, fallen is Babylon; and all the images of her gods are shattered on the ground.”

Revelation 14:8
And another angel, a second one, followed, saying, “Fallen, fallen is Babylon the great, she who has made all the nations drink of the wine of the passion of her immorality.”

Revelation 18:2-3
And he cried out with a mighty voice, saying, “Fallen, fallen is Babylon the great! And she has become a dwelling place of demons and a prison of every unclean spirit, and a prison of every unclean and hateful bird. For all the nations have drunk of the wine of the passion of her immorality, and the kings of the earth have committed acts of immorality with her, and the merchants of the earth have become rich by the wealth of her sensuality.” 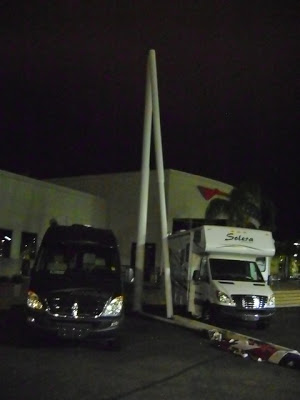 While on my recent trip across the United States, I was blessed to visit with Alan and Yalana, a couple from Southern Arizona. They attended the meeting I spoke at in Tucson, and a couple days later I spent some time at their home. On June 10th Alan and Yalana sent me two separate e-mails. The first one focused upon the image you see above. The second e-mail focused upon a linden tree that fell on the front lawn of the White House the same day. They sensed that there was significance to the events, and I readily agree. Yahweh is in complete control of His creation and He speaks through a myriad of ways.

The top photo shows a flagpole that suddenly broke late on the night of June 9th at Beaudry RV in Tucson.

I have written much recently on the direction the Spirit of Christ has been giving to many of the people of God to prepare an ark. Even as the ark of Noah’s day was a mobile residence that Noah and his family dwelt in during a day of judgment, so too the Spirit is directing many to prepare a mobile habitation, and the Spirit is testifying that judgment is close at hand.

The flagpole that toppled was no ordinary flagpole. It was 125 feet tall. This flagpole was taller than a 12 story building. It was reported that a microburst, a sudden, intense and powerful wind struck the area and broke the flagpole into several pieces, as can be seen in the image provided. What is also of interest is that the flagpole fell in such a precise way that no vehicles on the lot were damaged. If you will look closely at the picture you will see how unusual this was for there were motorhomes parked very closely on either side of the flag.

Truly, we can make whatever preparations the Spirit of Christ directs us to, but we must still depend upon the hand of God to shelter us in the storm that is about to break forth upon this land. The fallen flag symbolizes the collapse of America in a sudden, intense and powerful event. Let the people of God who have placed their confidence in Him be encouraged that even though the calamity should strike all around them, there is One who will protect those who have set their trust in God.

Please read over the following passage carefully. It is very familiar, and it is therefore often read over quickly. I am persuaded that it is a word for this present hour. The dangers and evils mentioned are those facing the nations at this very moment. This week the World Health Organization declared the H1N1 flu virus to be a pandemic. It was the first since declaration in over forty years. There are military threats, and threats of civil unrest. There are economic threats and threats of famine. There are threats from natural disasters, and the list goes on. Yet there is a shelter in the midst of the growing storm.

Psalms 91
He who dwells in the shelter of the Most High will abide in the shadow of the Almighty. I will say to Yahweh, “My refuge and my fortress, my God, in whom I trust!” For it is He who delivers you from the snare of the trapper, and from the deadly pestilence. He will cover you with His pinions, and under His wings you may seek refuge; His faithfulness is a shield and bulwark. You will not be afraid of the terror by night, or of the arrow that flies by day; of the pestilence that stalks in darkness, or of the destruction that lays waste at noon. A thousand may fall at your side, and ten thousand at your right hand; but it shall not approach you. You will only look on with your eyes, and see the recompense of the wicked. For you have made Yahweh, my refuge, even the Most High, your dwelling place. No evil will befall you, nor will any plague come near your tent (a mobile dwelling).

I am not putting any confidence in the camper/van God has provided for me as being a place of protection. I only have the camper/van because Yahweh indicated that it was His will for me to have it, and He has directed me to fix it up. My shelter and protection is found in God. My confidence is in the One who orders my steps and has faithfully provided for and protected me and my family for as long as we have looked to Him.

The falling flagpole could easily have fallen upon the motorhomes parked beside it, and they could have sustained great damage. Yet, an unseen hand directed the fall perfectly and the motorhomes, though so close to destruction, did not receive a scratch.

Safety is not obtained by being far away from calamity. Safety is found in being precisely where God directs a man or woman to be. Yahweh is a shelter to those who trust in Him, fear Him, and obey Him. 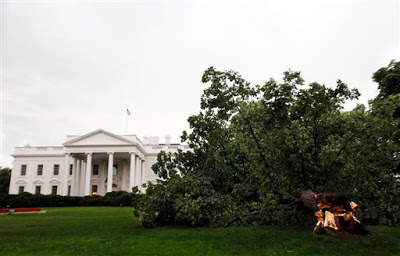 Another website that contains information on pagan beliefs reports the following:

Linden Tree – The sacred tree that protected against evil spirits and lightning, commonly planted in front of houses to keep evil from entering.
[Source: http://www.thepaganactivist.com/readersarticles.htm]

Seeing that the Linden Tree was considered to be a protector for houses, and was thought to keep out evil spirits, what is signified when the Linden Tree in front of the White House is suddenly broken off at the base of its trunk? As I looked at this image I was amazed that the tree broke where it did. Rather than the roots coming up from the soil as is common among trees toppled in high winds, the roots held fast and the tree snapped. It broke at the thickest part of the trunk, the place where it should be the strongest.

That a similar judgment fell in ancient Babylon and is recorded in the book of Daniel, immediately came to mind.

Daniel 4:20-27
The tree that you saw… it is you, O king; for you have become great and grown strong, and your majesty has become great and reached to the sky and your dominion to the end of the earth. And in that the king saw an angelic watcher, a holy one, descending from heaven and saying, “Chop down the tree and destroy it; yet leave the stump with its roots in the ground, but with a band of iron and bronze around it in the new grass of the field, and let him be drenched with the dew of heaven, and let him share with the beasts of the field until seven periods of time pass over him”; this is the interpretation, O king, and this is the decree of the Most High, which has come upon my lord the king: that you be driven away from mankind, and your dwelling place be with the beasts of the field, and you be given grass to eat like cattle and be drenched with the dew of heaven; and seven periods of time will pass over you, until you recognize that the Most High is ruler over the realm of mankind, and bestows it on whomever He wishes. And in that it was commanded to leave the stump with the roots of the tree, your kingdom will be assured to you after you recognize that it is Heaven that rules.

Unlike the events recorded in Daniel, there was no band placed around the trunk of the tree felled on the White House lawn. There is no promise of a restoration after a period of judgment. Did an angelic watcher command that the tree on the White House lawn be broken down and destroyed? I do not believe such an event at this hour on the front lawn of the White House is without significance. The news reported that the very next day the tree was ground up into mulch.

It is akin to the number six, six being the sum of its factors (3×3=9, and 3+3=6), and is thus significant of the end of man, and the summation of all man’s works. Nine is, therefore, THE NUMBER OF FINALITY OR JUDGMENT, for judgment is committed unto Jesus as “the Son of man” (John 5:27; Acts 17:31). It marks the completeness, the end and issue of all things as to man—the judgment of man and all his works.
[Source: http://philologos.org/__eb-nis/nine.htm]

The Spirit of Christ is setting forth many testimonies of judgment in this hour. Like these two events that occurred this week, what is coming will appear suddenly, and the fall of Babylon will come about with great swiftness.