Herding Swine into the Arms of the Beast System – Part 1 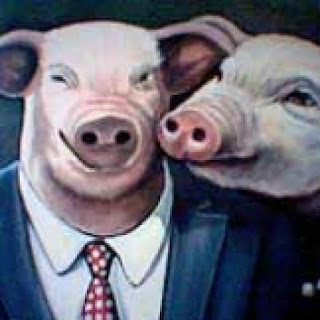 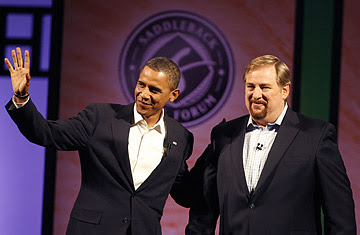 Barack Obama is well known to be a champion of abominations. He is an advocate of homosexuality and a staunch promoter of the most despicable forms of abortion (they are all abominations). This man invited a homosexual clergyman to pray at his inaugural festivities.
All this corruption did not trouble Rick Warren, who is pictured to the right of Barack Obama above. The two are seen at a forum hosted by Warren’s megachurch in California. Rick Warren was invited to give the invocation during Obama’s inauguration, and was happy to yoke himself to this man who calls evil good, and good evil.
Note the symbol of Warren’s church behind the head of the President. It appears that horns are arising from his head. Yet what is most symbolic is the name of Warren’s church. The church is called “Saddleback.” Truly the harlot is riding on the back of the beast, and Yahweh is revealing these things that the wise might have understanding.
It is great folly for the people of God to embrace the Beast System of this fallen world. Those who do so will suffer the fate spoken of in the book of Revelation.
“and the beast… will hate the harlot and will make her desolate and naked, and will eat her flesh and will burn her up with fire. For God has put it in their hearts to execute His purpose…”
Christianity does not love the truth and consequently have become as swine, and at this time Yahweh will pour forth His plagues upon the harlot, Babylon, who has become as a swine in His sight. Those who have refused to come out of Babylon have much to fear, but the righteous need not fear.
Many coming events will be used of God to make a division among His people. Those appointed to salvation will find themselves being led in troublous days to cast themselves wholly over into the hands of God. They will be led to trust Yahweh for their health, for their safety, for their food and shelter, and for all things. Yet a great multitude will be led into the embrace of the Beast System.
The Beast System will present itself as an ark of safety and refuge for all mankind in very dark days. Those who do not know the voice of God will run into this systems embrace, urged on by ministers who serve as herders of swine. These ministers will tell the people that it is the will of God that they flee into the arms of the Beast, and the Beast himself will be depicted as a savior and messiah. 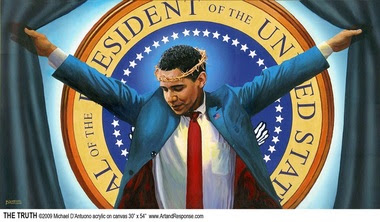 See the following blog to see how much work has already gone into building an image of Obama as savior to mankind.
https://parables.blog/2008/11/barack-hussein-obama-antichrist.html
People of God, the hour is very late. Multitude will find themselves in the valley of decision in coming days. Terrors will be on every hand, and these frightful things will be used to herd mankind into the full embrace of the Beast system which is found in the governments of this world. Those who are driven by fear will risk running headlong into the sea of death.
We live in an hour when all the saints of God must distinguish between the voices that arise from their own soul, and the voice of the Spirit of Christ. The saints are to be led by faith, not driven by fear. The Scriptures declare that “faith arises out of hearing, and hearing comes by the word of Christ” (Romans 10:17).
As saints, we must wait patiently to hear a word from God, and then we must quickly obey what Yahweh speaks to us. In this way we will be able to abide in a place of peace when all the world around us is shaking.
I have heard from some who are hearing the voice of the alarmists who are inciting much fear and causing stormy waves to begin to arise in the souls of many. It is difficult to remain at peace when our eyes are upon the wind and the waves. We must place our eyes upon Christ, then we will be able to walk upon the water and the stormy waves will be under our feet.
Yahweh would have His people to discern the parables that are being given in the events occurring all around. At the same time He would have them to not be driven by fear, but to walk by faith.
It is my hope and prayer that those appointed to salvation in this last hour would enter into the true ark of safety, which is God. Do not allow yourselves to be driven as a herd of swine into the arms of the Beast system. That path leads only to the sea of death.
May you be blessed with peace and understanding in these days.