Every now and then I feel compelled to comment on issues in the news. There is so much going on in this hour. The end of the age is at hand, and the earth must go through her birth pangs as the sons of God are revealed. Many things are being set in place for the fulfillment of a host of Scriptural prophecies.

I am going to just give a brief moment to a number of things occurring at this hour. A sister in Christ sent me a link to the following video. It is extremely eye-opening. It should cause every person to question those things they see on television. It is literally impossible to tell when we are seeing an actual event, or a staged event. Technology has advanced so far as to make them indistinguishable. (Remember Forrest Gump speaking to multiple presidents?)

Bob Schlenker provided a link to an article on what is happening with implantable RFID chips. They have been progressing from a technology first used for identifying pets, to being implanted in humans for medical monitoring and to hold patient ID records. Now they are being integrated to the banking system, and it will not be long before such technology is required in order to buy and sell, or to function in the modern digital world. 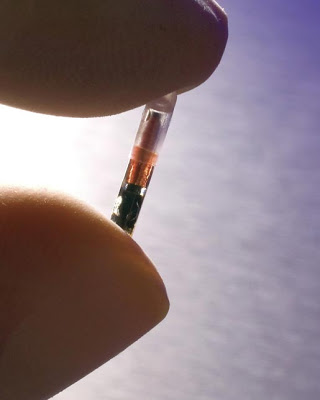 These chips are made to be implanted into the body. Technology has been developed to allow them to monitor the blood of the individual, and they can give real-time blood glucose monitoring information for diabetics. They are also being marketed as flu detectors, especially of such strains as H1N1, which has been greatly hyped.

Now, the technology is going to the next level. It will begin to be tied into the financial services industry. PostiveID, formerly known as Verichip, has partnered with FIS, “one of the world’s largest providers of banking and payment technology.”

There is still a lot of resistance to the idea of receiving an implantable chip for security, health, and financial services. It will require some major crisis to persuade the masses to accept such an implant. Undoubtedly, the needed crises have already been scheduled, and we will see a much wider roll-out of this technology in the not-so-distant future. 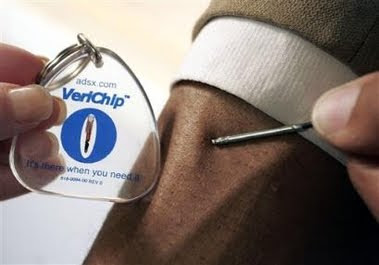 Bob Schlenker also did a good job of examining the symbolism of the 2008 Beijing Olympics opening ceremony. The Olympics are being used as the Illuminist’s venue of choice to display their plans through various symbols, images, and carefully choreographed stage shows. The occult is an ever present and pervasive element in these ceremonies. You can find Bob’s analysis of the 2008 Olympic ceremonies at the following link. He has written at great length on this subject.

I anticipated that it wouldn’t be long before Bob began commenting on the present Winter Olympics in Vancouver, Canada. I have received some correspondence from other readers asking me my thoughts on the symbolism of the Olympic icons being used. 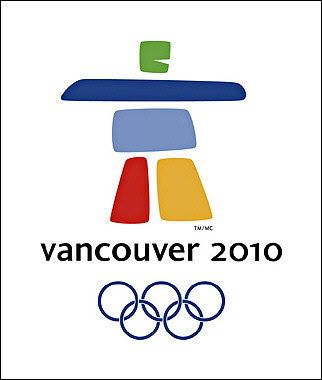 This image was created by Vancouver artist Elena Rivera MacGregor. According to a CBS news report on this symbol:

The emblem of the Olympic Winter Games is a colorful humanoid with arms spread wide, a contemporary interpretation of a stone landmark called an inukshuk with a history stretching back more than 3,000 years in Inuit culture…

An inukshuk is a carefully balanced pile of unworked rocks and slabs. The Inuit have built them through time to guide travelers, assist with hunts, warn of danger or indicate caches of food. A miniature version stands hip-high, with others measuring 3 to 6 feet tall, one builder said.

With a more human look, the design for the Olympic emblem was chosen in 2005 from about 1,600 proposals to represent hope, friendship, hospitality and teamwork, according to Vancouver organizers. Named Ilanaaq, meaning friend, it was cast in Canada’s red and two shades of blue, along with green, yellow and gold, to evoke the host country’s sweeping forests, mountains, islands and sunsets.
[Source: http://www.cbsnews.com/stories/2010/01/26/world/main6141941.shtml]

The word inuksuk means “something which acts for or performs the function of a person.”
[Source: http://en.wikipedia.org/wiki/Inukshuk]

Wikipedia also says that an inukshuk is often confused with an inunnguag, which is a cairn representing a human. Clearly, the symbol adopted by the Olympics is intended to appear as a human, and is closely related to images of existing innunguag. 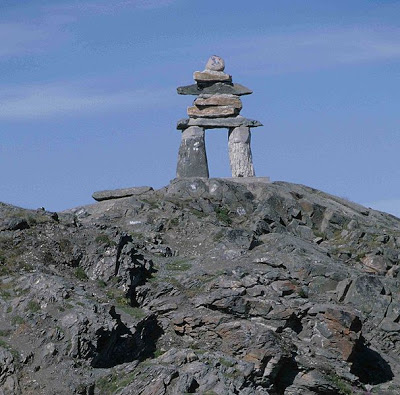 This stone idol, which has been given the name “Friend,” is the symbol chosen for the 2010 Winter Olympics. Idols are rife throughout these Olympics, and there is a theme developing where one sees inanimate images coming to life. This was the motif chosen for the opening ceremony as massive idols arose from the ground to stand upright, and then the many indigenous peoples of Canada danced around and came before them in symbolic worship. 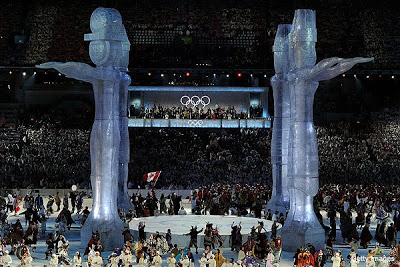 Such a spectacle evokes the memory of the Israelites frolicking around the image of the golden calf that they had set up. It is of particular interest that all of these idols that are raised to life, are appearing at the same time that the all-time top grossing movie “Avatar” has been playing in theaters. Avatar has amassed sales of $2.5 billion dollars worldwide. The word Avatar shares the same definition as the Inuit word Inukshuk. They are both something non-human that perform the function of a human.

The following passage of Scripture ties these last two news items together.

I inserted the Greek word pneuma into this Scripture in place of the English word, which is often rendered as “breath,” or “life.” The word pneuma in the Greek is very often used to denote the soul of man. Strong’s Concordance defines it as follows:

pneuma
a current of air, i.e. breath (blast) or a breeze; by analogy or figuratively, a spirit, i.e. (human) the rational soul, (by implication) vital principle, mental disposition, etc., or (superhuman) an angel, demon, or (divine) God, Christ’s spirit, the Holy Spirit:

The movie Avatar is centered upon the idea of transferring the soul of a human into an alien body that has been genetically manufactured. The unmatched popularity of the movie attests to the acceptance there is in the world for such a concept. It is not hard to imagine all the world worshiping an image given life as described in Revelation. Many already are doing so as they ecstatically embrace the movie Avatar. The worship of images that come to life is clearly symbolized in the opening ceremony of the Olympic games. Note that it was people from a vast array of aboriginal groups throughout Canada that all came to dance and worship before the images, and all the nations of the world looked on.

Another note that I would add on these recent Olympics: you may remember that on 8-8-08, the kick-off for the Beijing Olympics, fighting broke out in the nation of Georgia. This resulted in many deaths in the region. The start of the 2010 Vancouver Olympics was also marked by the death of a citizen of Georgia. Nodar Kumaritashvili was killed in a crash on the Luge run as the Olympics were set to begin.

I do not believe that it is coincidental that both Olympics were interrupted by tragic news relating to the nation of Georgia. What is the significance of Georgia? It is popularly known as the first Christian nation in the world, having declared itself to be so in the 4th century A.D..

Are Satan and his accomplices seeking to testify that the death of Christianity among the nations of the world is at hand? Was a man representing the first Christian nation on earth slain by Satan as a ritualistic act of sacrifice to initiate the beginning of these Olympics, and those held in 2008? Perhaps.

(Please note that I do not believe there is now, or ever has been a truly Christian nation on the earth, but this does not diminish the symbolic aspect of these events.)

The hour is late. Satan’s plans are advancing quickly in this hour. Yahweh is also moving quickly to prepare a people to share His nature in this last hour. A great separation will be seen in this hour, and one trend we will definitely see is that the remnant of saints who will not compromise, who spurn the syncretism of all religions into one, will be labeled as extremists and “marginalized.” This is the headline on a CNN news article.

I reported a couple years past that there has been the utmost effort put forth by a concerted effort of government and media to create a view in the minds of the populace that the greatest danger in the world today is “religious extremism.” Those Christians who say that there is salvation in no other name than Jesus Christ/Yahshua the Messiah, will soon be labeled as extremists. They will be characterized as divisive, and promoters of hatred and strife. If you read between the lines in the article above, you can see this definition present.

What does it mean to “marginalize” religious extremists? It means to render them irrelevant, to push them out on the fringes of society, to put them away where they can not harm or influence anyone.

To read what I have written in the past about this trend, see the following link:

The hour is late. Are you walking as you ought?

I Thessalonians 5:2-6
For you yourselves know full well that the day of the Lord will come just like a thief in the night. While they are saying, “Peace and safety!” then destruction will come upon them suddenly like birth pangs upon a woman with child; and they shall not escape. But you, brethren, are not in darkness, that the day should overtake you like a thief; for you are all sons of light and sons of day. We are not of night nor of darkness; so then let us not sleep as others do, but let us be alert and sober.