An Invitation to Pray 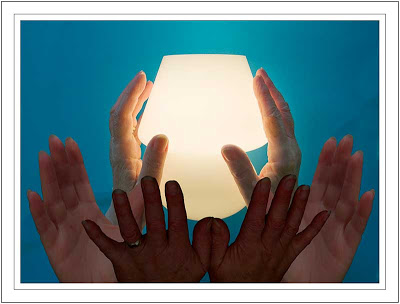 Although the picture above represents a pun on this old proverb, I felt it was appropriate for what I desire to convey. Ministering the light and life of Christ to others is never an individual matter. This is especially true among the BODY of Christ where “no man is an island, entire of itself.”

I have been pondering the things the Father is leading me to do at this time, and I am cognizant that I cannot accomplish these things alone, neither am I desirous of doing so. I am only one part of the body of Christ, and although my specific function among the body is a small part of the whole, even this small part cannot be accomplished apart from the coordination of many individual parts.

Ephesians 4:16
The whole body, being fitted and held together by that which every joint supplies, according to the proper working of each individual part, causes the growth of the body for the building up of itself in love.

Coordinating the various parts of the body of Christ is something I have not sought to undertake myself. I have seen churches, coordinated through the organization and administration of man, endeavor on extensive projects of which the Spirit of Christ was not the initiator. For this reason, I have operated under a great inhibition in the matter of seeking to rally the members of the body of Christ around some project. It is always a great danger that we might of our own soulish power ram some project through to completion, only to discover later that God was not in it. We are all liable to give birth to an Ishmael when we do not wait upon the Father to accomplish what He has said He will do.

I want to be careful to not go beyond what the Spirit is declaring. At this time I do not see the complete matter, but only a portion. I believe there is value in sharing with you that portion I do see, while asking you to join with me in praying for our Father to bring forth the entire matter according to His will and pleasure. I need His direction. Right now I do not have the clarity needed to venture forth with confidence. I am reminded of the words of James.

James 1:5
If any of you lacks wisdom, let him ask of God, who gives to all men generously and without reproach, and it will be given to him.

I have seen the Father do great things when the saints were united in prayer, and I am also mindful that when God determined to send forth Paul and Barnabas across the land to perform the ministry He had appointed to them, it was birthed through a season of prayer among the body of Christ.

Acts 13:2-3
And while they were ministering to the Lord and fasting, the Holy Spirit said, “Set apart for Me Barnabas and Saul for the work to which I have called them.” Then, when they had fasted and prayed and laid their hands on them, they sent them away.

Logistics is not something that comes easily to me. I am not an organizer. Some may recall that last year on my trip across the country that I wrestled with having to plot times and dates of meetings, map out a route from point A to point B, do the driving, the set-up, and teaching, aside from a number of other tasks. I did, however, have some sense of what the Father desired me to share with His people, and having a message removed a lot of the uncertainty from my walk.

At this time, I do not know what message the Father would have me to share with His people. I do not know what He would accomplish at each place, and without a vision one will never know whether he has struck the mark, or missed it. I do sense that the Spirit is saying that I am to set out on this trip in April.

I would ask you to pray for another matter that is before my mind. Ever since the Lord led me to this recent experience in jail, I have had a burden for those who are in prison. Yahweh does not waste our experiences. Even as I know that the years He led me to work at a homeless shelter were for a purpose, so too is this experience in seeing life from inside a jail for a purpose. I am reminded of the words of Christ.

Matthew 25:35-41
“For I was hungry, and you gave Me something to eat; I was thirsty, and you gave Me drink; I was a stranger, and you invited Me in; naked, and you clothed Me; I was sick, and you visited Me; I was in prison, and you came to Me.” Then the righteous will answer Him, saying, “Lord, when did we see You hungry, and feed You, or thirsty, and give You drink? And when did we see You a stranger, and invite You in, or naked, and clothe You? And when did we see You sick, or in prison, and come to You?” And the King will answer and say to them, “Truly I say to you, to the extent that you did it to one of these brothers of Mine, even the least of them, you did it to Me.”

The inmates at the jail to which I was sent were locked down in their cells twenty hours a day, every day. They were let out at meals and breaks. Some of these men had been there for months, and some for years. Some rarely received a letter, or had a visitor.

I recently wrote of God leading me to two men inside this jail to minister to them. These men were like dry sponges, hungry to soak up the words of truth. Aside from teaching them during break times, I asked my daughter Kristin to print out some chapters from some of my books to send to these two men. These men in turn began passing these writings along to other inmates. Soon there were six different men that Kristin was sending writings to. There could easily have been more, but I did not want to overburden my daughter, for she was nearly every day printing out material, addressing envelopes, and mailing them to these men in jail. (Kristin works a full-time job, and is also actively involved in the ministries of her church, and in ministering to young women in her community.)

Since my release I have taken up this printing and mailing of material that Kristin had been doing. I have been able to see how much time it takes to print out teachings, stuff envelopes, address each one by hand, and go to the post office and stand in line to mail them. Aside from the time involved, there is also some expense, particularly for printer consumables, envelopes and postage.

I spoke to my daughter yesterday and thanked her for all her labors when I was in jail. She came and visited me weekly. She wrote to me regularly. She set-up a special PayTel account on her phone, and that of a friend, so I could call them collect from jail, which is the only way inmates are allowed to make a call. Kristin was keeping a number of my friends appraised of my situation by sending them e-mail updates. She was regularly taking money from my bank account and putting it on my account at the jail so I could buy the things I needed, such as socks, underwear, personal hygiene items and writing materials.

People of God, my time in jail was made much more bearable because my daughter fulfilled the words of Christ in the passage cited above from the book of Matthew. Kristin did these things as unto the Lord, and I was the recipient of this service to Christ!

The men who were receiving the writings Kristin was mailing to them were deeply appreciative. It was the only mail some of these men received. I remember more than once some man pounding on his door to get my attention then holding up the envelope he had just received as if it were some prized possession. Truly, those who have little are more appreciative than those who have an abundance.

Interestingly, my daughter had planned months prior to my incarceration to participate in a prison ministry trip to Florida. This coincided with my own time in jail. I told her that this was very symbolic, for we both were granted opportunities to minister to prisoners at the same time. Next week, Kristin is going on another prison outreach, this time to South Carolina.

It has been on my heart since my time in jail to begin taking the myriad of writings and teachings the Father has given to me over the years, and putting them in a format suitable for mailing to “the least of these” who are in prison.

You may think that there are already a lot of Christian ministries focused upon prisoners, and this is true. Yet, what the Spirit of Christ revealed to me from the inside is that the vast majority of prison ministry is carnal. The messages are insipid, weak, unprofitable, and filled with error and deception. Having attended a number of chapel services conducted by men from area churches, I became so appalled at the deception and error being proclaimed that I could not bear to attend any more meetings.

It should be anticipated that the state of ministry inside the prison is no better than that outside. Everywhere there is carnality. The gospel message has become distorted. There was no message of righteousness and conformity to Christ, no message of a cross that all Christians must bear. Meeting after meeting the speakers proclaimed, “just say the sinners prayer and you will go to heaven when you die.”

Christ has a remnant inside the prisons that His eye is upon, just as there is a remnant outside. He earnestly desires that none of these might be lost. These need to be fed upon nourishing food that will build up the spirit of a man. My heart yearns to reach such ones.

People of God, would you pray with me that Yahweh might make it clear how He would have me to proceed? In both this trip across America and this outreach to men in jail, I need the Spirit to direct my steps.

Would you also invite the Father to reveal to you what He would have you to do as that unique part of the body of Christ that you are called to be? You have been fashioned and precisely placed among the body for a purpose. The body will suffer if you are not fulfilling your role.