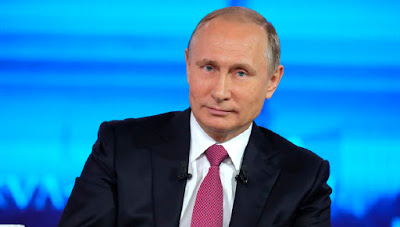 It is one thing to state that the President of the United States is a chosen vessel of the New Word Order. We can see the signs everywhere. The news is against him. The news that is owned by five companies representing thousands of individual sources. It is perhaps a little difficult to explain that the President of the U.S.A. is picked by the same people to be a counterfoil in their news pieces. That such a man would be picked as a protector for conservative views of righteousness could hardly have been guessed. After all, there is nothing in his background that speaks of righteousness. He is the ultimate woman molester, being married three times himself and having hundreds of other women who were willing to give up propriety for a little money or personal favor.

I suspect the reason he was elected was to cast all of the men in this country who voted for him as Christian hypocrites. Judge Roy Moore is a precursor to him, although I don’t believe he did any such thing. The women who have accused him are duplicitous, for example having accused him, but not letting an independent handwriting specialist check out his signature in a year book that is forty or fifty years old. If what they were saying is true they would be glad to have anyone check out his signature.

Trump is another character though. He has done far worse than is being reported. Back when he was running around with Jeffrey Epstein he was accused of raping a 13 year old girl and threatening her should she say anything. 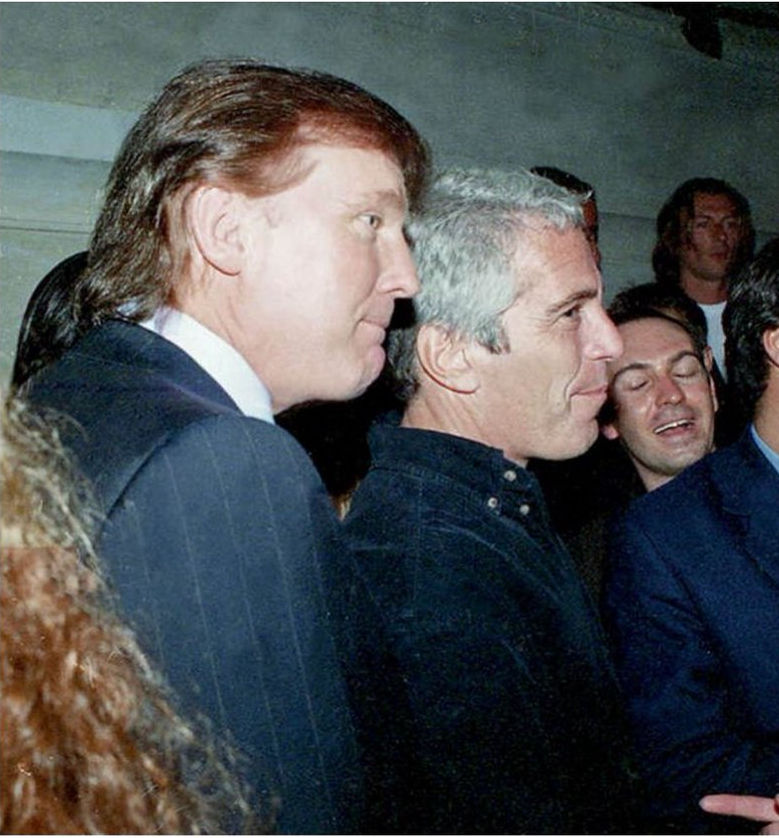 Epstein with his billions could not get out of it when the girl charged him and ended up with a court record of being a child molester. He spent 13 months in jail and had to pay dozens of girls for their participation in his ill gotten gains.

This may be the condition of politics in the West, but what of political leaders in the rest of the world? I have been discoursing with a number of people lately about Vladimir Putin. On the surface he appears to be quite the contrast to the shady men (and women) of the rest of the political sphere. He stands against homosexuality.

He says he is against abortion, and does not allow public advertising of it, though the nation of Russia still receives nearly a million abortions a year. The most remarkable thing he does is to defend the Russian Orthodox Church. This is something that the former Communist party did not do, for the church was banned and all existing churches were turned into public utilities, or private government places. Is the President of Russia a Christian? When asked about it he makes his affiliation with the Russian Orthodox Church sound like his testimony. He says he does not like to talk about religion publicly, but he gives his baptism as a young baby of a month and a half as his entrance onto the church. 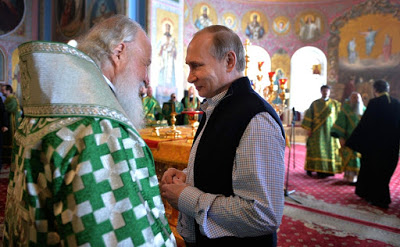 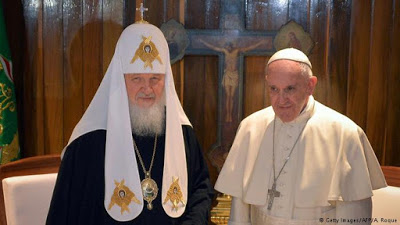 It is difficult to see any of Christ Yahshua in the leaders of these two churches. They are apostate leaders of idolatrous churches. It was against the apostles teaching for men to wear hats when preaching or prophesying.

I Corinthians 11:4
Every man praying or prophesying, having his head covered, dishonors his head.

These men are dishonoring their head, if their head is Yahshua. Of course, I think it is not. These men are part of that church in Revelation known as the Great Harlot.

Revelation 17:1-5
Then one of the seven angels who had the seven bowls came and talked with me, saying to me, “Come, I will show you the judgment of the great harlot who sits on many waters, with whom the kings of the earth committed fornication, and the inhabitants of the earth were made drunk with the wine of her fornication.” So he carried me away in the Spirit into the wilderness. And I saw a woman sitting on a scarlet beast which was full of names of blasphemy, having seven heads and ten horns. The woman was arrayed in purple and scarlet, and adorned with gold and precious stones and pearls, having in her hand a golden cup full of abominations and the filthiness of her fornication. And on her forehead a name was written: MYSTERY, BABYLON THE GREAT, THE MOTHER OF HARLOTS AND OF THE ABOMINATIONS OF THE EARTH. 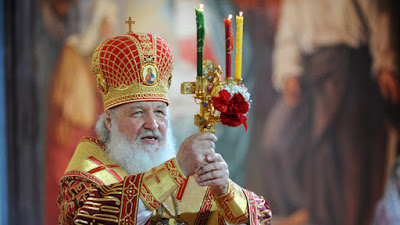 The cross forms the Tau which is a symbol for Tammuz. There is nowhere in Scripture that the leaders are supposed to dress in rich garments and head pieces. There is nothing said about the Taus on their shoulders or the pictures of their Lord with the halo or nimbus surrounding his head. There is nothing said about the prayer beads they wear around their wrists, or a thousand other things they do, including celebrating Christmas and Easter. There is also nothing about what they don’t do. They don’t celebrate Passover, Pentecost, or Tabernacles. Why is that?

Luke 14:26-27, 33-35
“If anyone comes to Me and does not hate his father and mother, wife and children, brothers and sisters, yes, and his own life also, he cannot be My disciple. And whoever does not bear his cross and come after Me cannot be My disciple…  So likewise, whoever of you does not forsake all that he has cannot be My disciple. Salt is good; but if the salt has lost its flavor, how shall it be seasoned?  It is neither fit for the land nor for the dunghill, but men throw it out. He who has ears to hear, let him hear!”

It is not an easy thing to be a disciple of Christ. A man must give everything to be one of Christ’s disciples. Christ said to the

Matthew 8:19-20
Then a certain scribe came and said to Him, “Teacher, I will follow You wherever You go.” And Yahshua said to him, “Foxes have holes and birds of the air have nests, but the Son of Man has nowhere to lay His head.”

Foxes and birds both have their own place in this world, but a disciple of Yahweh is content to go wherever his Master sends him and to do whatever his Master requires of him. This is not what Putin is doing. Last year he forbid any of the churches to evangelize outside of the church. Of course there was an exception to his limitation. The Russian Orthodox Church received a pass.


Vladimir Putin’s Christianity is a facade, says expelled US missionary
It is now well over a year since Vladimir Putin’s Russia passed ‘anti-missionary’ laws and more than 180 cases have since been brought.
Activities ranging from prayer meetings in homes, posting worship times on a religious website and praying in the presence of other citizens have been interpreted as ‘missionary activity’ with Christians making up the vast majority of the law’s victims.
One case is that of Donald Ossewaarde, an American Baptist preacher living in Oryol, who was expelled for hosting a church meeting in his house.
Having lost appeals throughout the Russian judiciary system, Ossewaarde’s case is now with the European Court of Human Rights. Although confident he will win there, Ossewaarde is convinced he will never be allowed back into Russia. 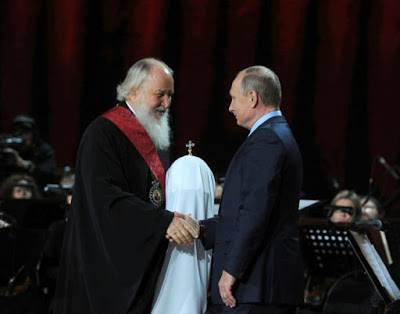 ‘I am quite sure based on precedent they will rule in my favour. But I am not sure it will have a great effect on the situation in Russia,’ he says.
‘Russia has lost many many times in the European Court. Sometimes they pay. Sometimes they ignore its rulings. It doesn’t seem to make a big difference to the way they practise when it rules against them.’
As well as dozens of Christians, the law’s ever broadening reach and interpretation has led to more than 40 Jehovah’s Witness-linked prosecutions as well as four Mormon-related cases, nine Muslims and more than 10 Hindu-linked prosecutions.
But the one religious group not affected by the so-called Yarovaya law is the Russian Orthodox Church.
Speaking to Christian Today at a conference run by ADF International, a legal charity that represents Ossewaarde, he explains his conviction the Church was behind his arrest.
‘I know that they have profited from what has happened to me,’ he says. ‘They are obviously the ones who benefit the most from going after any other form of Christian.’
The Russian Orthodox Church is used ‘as a political’ tool, he says, by Putin whose history raises questions about the sincerity of his faith…
A Baptist preacher, Ossewaarde was fined 40,000 rubles for holding religious services in his home…
‘It is all a façade,’ he says, bemoaning Putin’s propaganda success in presenting himself at home and internationally as a champion of conservative Christian values by opposing homosexuality and abortion…
[https://www.christiantoday.com/article/vladimir-putins-christianity-is-a-facade-says-expelled-us-missionary/113635.htm] 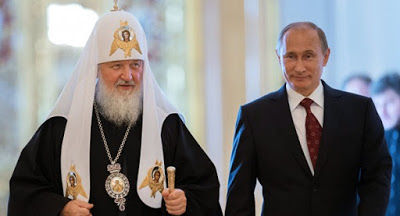 Vladimir Putin’s faith is not unlike the Tsars before the time of Communism. There has been a long time that the Russian Orthodox Church has been helped by the government. Now that Communism is gone Putin has merely gone back to the way things were once before. Protestant Christianity is treated no differently than a cult. Jehovah’s Witnesses, Mormons, and Protestants are all vilified. They are able to conduct service in a church building, but not in a house, and nowhere else… unless they are the Russian Orthodox Church.

Do not be surprised when in coming days Putin makes more arrests of those who do not play Christianity after the manner of the Catholic and Orthodox churches. Christ said to come out of them lest you partake of the plagues for her sins. Come out.

Christ is calling His people to come out. Let’s not make the mistake of leading more people into sin.