Some have asked about my status since I did not post anything this past week. I am doing well. I have been keeping very busy, and very productive.

On March 13th I had my last doctor’s appointment related to my motorcycle accident. The doctor said everything was looking fine. In fact, the physician’s assistant remarked more than once that my progress was much better than anticipated. He was amazed at how mobile and active I was already. I have been walking a good bit, and have returned to riding my bicycle almost every day. I can easily do a ten mile bike ride and not feel any worse for wear afterwards, though there is some swelling still occurring which the doctor said will continue to diminish. The weather here in Georgia has been most accommodating. It has been in the 70s and 80s during the daytime, almost too warm at times. Today the high was forecast to hit 88 degrees which is quite a bit above average for this time of year.

A few days ago I packed up all my winter clothes and got out my summer clothes to hang in my closet in The Dreamer. The change of season has been very abrupt. I very literally went from running a heater at night, to running the air conditioner just a day or two later. This seems symbolic of those things the Spirit is indicating are coming to God’s people. Abrupt changes are at hand. There will be no gradual transition from one experience to another. Things will happen quite suddenly in days ahead.

This same week (March 11th) we experienced Daylight Savings Time. Our clocks had to be set ahead. (Spring Forward/Fall Back). Although this occurs as an annual rite of passage, there seems to be a spiritual significance to it this year. An hour is lost. At 2:00 A.M. the clocks are set ahead to 3:00 A.M.. An entire hour disappears from our lives as if it were simply skipped over. We find ourselves suddenly at a later hour. The regular passage of time is interrupted and things are accelerated. This acceleration is seen by those who had to set their analog watches and clocks. As the clock is adjusted one can observe the minute hand moving ahead with a rapidity that is not normally seen. An entire hour of time is condensed into a few seconds as the hands are rapidly moved forward.

My life seems to parallel this acceleration of events. Even as the Physician’s Assistant remarked on the quick progression in my healing from this injury, I have experienced a rapid progress in other areas as well.

I mentioned that at the beginning of this month the Father indicated I was to leave the RV park I had been staying at for the preceding 14 months. The number 14 is used in the Bible to signify transition from one experience to another. Since relocating the Father has been rapidly accomplishing some things that I had on my to-do-list for a long time. I had shared how my brakes had been locked up on my bus for nearly a year. Then I was involved in a motorcycle accident and was forced to sit for a season. Now that both my bus and I are mobile again, there is much being done.

The Father provided the means for me to get my front tires replaced on The Dreamer. The front tires did not match the tires on the rear of the bus. The rear tires were newer and in much better shape. The front tires were severely dry rotted. As you might expect, I was observing the details of this matter closely, for Yahweh has spoken many symbolic things through this bus. To refresh you on a few details, the bus was built by Carpenter Body Works. It doesn’t take much imagination to see a spiritual parable in this fact. Christ is often referred to as a Jewish Carpenter and He does have a Body that He is working on. The bus is 40 years old, being built in 1972. Forty signifies wilderness journeys, trials, and probation throughout the Scriptures. The bus was formerly used as a Church bus, but was then sold to an individual who used it for entertainment purposes as he drove it to NASCAR races. The church has also sold herself to entertainments and vain pursuits (driving around in circles is symbolic of vain pursuits.)

The tires I replaced were manufactured by Goodyear. Goodyear no longer makes this tire, as there are fewer and fewer vehicles that still use this size and type of tire (it has an inner tube on a split rim). Goodyear goes where the profit is, and they make their money where large numbers of tires can be manufactured en masse. With dwindling numbers of vehicles using these tires, Goodyear abandoned this particular model. This seems a parable of the years of prosperity dwindling away. Those who have been accustomed to “good years” are finding that they are fading fast. (Dry rot is caused by the sunlight drying out the rubber, leaving it cracked and brittle.)

An affirming testimony was observed last year when a Goodyear blimp in Germany caught fire and crashed to the ground killing the pilot. 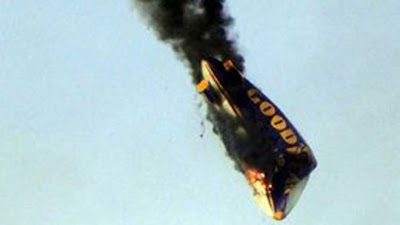 The image above from the crash reminds me of another image I posted on a blog that spoke of the demise of America’s monetary system. 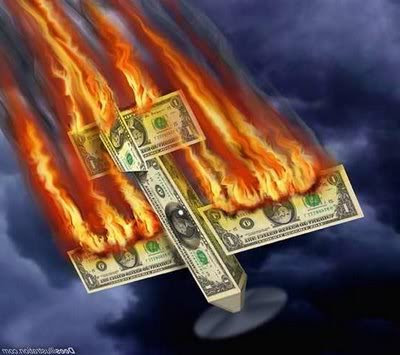 You can read about the Goodyear blimp crash here:

Very symbolic was the message painted on the blimp that crashed. 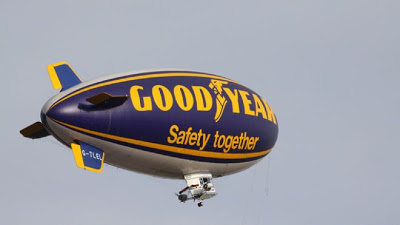 I am reminded of the following words of the Lord through the apostle Paul.

I Thessalonians 5:3
While they are saying, “Peace and safety!” then destruction will come upon them suddenly like labor pains upon a woman with child, and they will not escape.

As I think of America, Europe, and the church in particular, I see this mindset among them that everything will be alright. No one else seems concerned about any impending and sudden end to the years of prosperity. It is like being surrounded by more than a thousand partying, entertainment sated, passengers on the Costa Concordia. What could possibly go wrong with such a fabulous ship? It had been sailing the same trek for years and had done so safely. There had been no interruption to the festive atmosphere before, no reason even for concern.

What are Christians to do when the world is experiencing birth pangs? When the gravy train has ended, and prosperity has dried up leaving only a barren wilderness, where are they to look to for their provision and needs? The tires the Father gave me to replace the Goodyears are Power King tires. 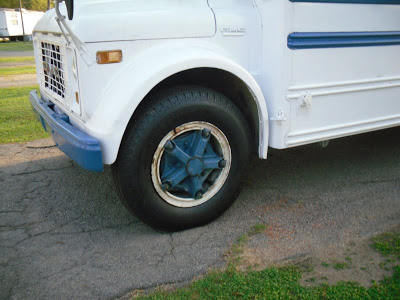 When the local dealer told me this was the brand he carried I was confident that they were the one’s the Father had chosen for the bus. The four tires on the rear were also Power King, so now the bus rides on a complete set of Power King tires.

Matthew 28:18-20
And Jesus came and spake unto them, saying, All power is given unto me in heaven and in earth. Go ye therefore, and teach all nations, baptizing them in the name of the Father, and of the Son, and of the Holy Ghost: Teaching them to observe all things whatsoever I have commanded you: and, lo, I am with you alway, even unto the end of the world. Amen.
[KJV]

Vehicles represent ministries. Those who serve as ministers of Christ are to look to their Lord and King who has “all power” to provide them the wherewithal to accomplish every task. They are not to lean upon the arm of the flesh, nor look to carnal methods to accomplish spiritual assignments. Even as the front tires are used for guiding a vehicle in the direction it is to go, the disciples of Christ must have all confidence that the One who has chosen them and appointed them to serve, will provide both guidance and power to accomplish all things.

While I was getting the tires put on, one of the managers of the facility told me of a nearby mechanic who could take care of some other needs. The main seal on the rear axle needed to be replaced as it was leaking gear case oil across the brakes on the driver’s side. I also needed to get the exhaust pipe routed out behind the rear tires. I had to cut it off under the middle of the bus when I installed the waste holding tanks in the rear of the bus. A mechanic came down, looked it over, and scheduled me to come in the next morning and have the work done. They also adjusted out all the brakes for me as one on the rear was too loose, and one up front was too tight, and they changed the oil (fresh anointing). These are things I had been wanting to get done for some time, and they were accomplished suddenly.

This represents only a portion of the things I have been doing this week. I hope to share further in upcoming posts. I sense that there are great changes ahead. Things are beginning to move quickly. I have an anticipation of things to come. If others are also experiencing changes, or are sensing themselves to be entering into a time of transition, I would like to hear from you on these things. Let me know what the Spirit is doing in your life, and what He is speaking to you.

Habakkuk 3:17-19
Though the fig tree may not blossom,
Nor fruit be on the vines;
Though the labor of the olive may fail,
And the fields yield no food;
Though the flock may be cut off from the fold,
And there be no herd in the stalls —
Yet I will rejoice in Yahweh,
I will joy in the God of my salvation.
The Lord God is my strength;
He will make my feet like deer’s feet,
And He will make me walk on my high places.