Responses to ‘A Prophetic Experience’ 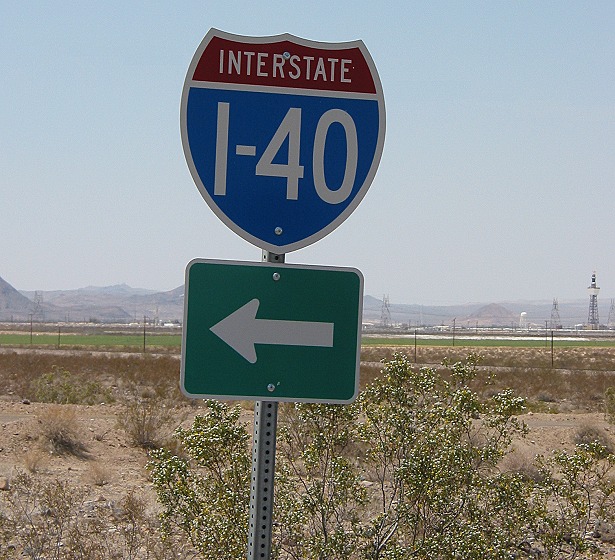 I have received a number of responses to yesterday’s blog post that I thought I would share. The first one comes all the way from Australia.

I have come across your blog only recently… and I have started drawing people’s attention to your work via my website too.

I was really blessed to read some your early 2008 blogs as I have known in my spirit for a long time that, in the Lord’s time, He would raise me up as a Moses-type ministry – specifically as one who could lead God’s people out of slavery in Egypt through a wilderness I have come to know and love en route to a promised land I have only ever seen in the Spirit. We can only take people where we have been ourselves. The message I carry is one of separation from the world system – with its flood of sexual immorality and Babylonian covetous debt system of finance – and a return to the Covenant and intimacy with our Lord. We must let no one deceive us with empty words. It is because of sexual immorality and covetousness, which is idolatry that the wrath of God is coming upon the sons of disobedience.

Just reading your latest blog, I wanted to share something that happened to me recently. In hindsight, I wish I’d taken more notice of the numbers in the experience (amount of transaction, time of day, etc). I was out traveling with my family in the country and we stopped to get some fruit at the country fruit shop. As we’d left home I had a thought to put some cash in my pocket even though we often use EFTPOS (Electronic Funds Transfer at Point of Sale) to pay for things these days. After I’d gathered some fruit to purchase, I went to pay and the shop assistant told me that unfortunately the EFTPOS system was down. After a short hesitation I remembered I’d put a $50 note in my pocket. I said to the lady, ‘Well, just as well I have some cash.’ As I said this, I stretched the note (very strong plastic notes here in Australia) out as if to emphasise the cash I was carrying and it tore in half!! We were all shocked for a second. And then she said, ‘It’s okay I’ll tape it up and the bank will accept it.’ I laughed and said, ‘Well I’m kinda out of options if you aren’t able to accept this note.’

I didn’t think too much of the experience until I was driving again in the car and the Spirit of the Lord spoke to me and said, ‘The monetary system will break very soon.’ Of course, I know the economic system is on the verge of collapse but the Lord was highlighting to me, through this experience the closeness, of this happening. I then recalled a dream I had not long before this experience where, in my dream, the Aussie dollar dropped by 20c in one day! I was kind of surprised at that dream because often I think of the stock market crashing rather than specifically what might happen to individual currencies. Obviously a 20c drop in the dollar in one day is unheard of except in the event of a massive economic storm.

Anyway, my heart is warmed as I read what you are sharing, brother, and I have linked your analysis of the London Olympics closing ceremony to my mailing list. If you were interested in what I wrote in that email/blog called ‘Anoint Thine Eyes With Eye Salve That Thou Mayest See’, you can have a read by going to www.sweetriversrevival.org.au/words/view/457

Again richest blessings in Yeshua my brother. His kingdom come, His will be done on earth as it is in Heaven.

This experience with the electronic funds machine being down, and his money tearing in half at the same time, is indeed profound. When I wrote Dylan back I shared with him that it is hard at this moment to perceive the amount of panic and chaos that will suddenly result when people’s money fails them. Recent items in the news reveal that the government is preparing for these days. The Department of Homeland Security, which is a domestic agency, has placed orders for 750 million rounds of hollow point bullets. To put this in perspective, the U.S. military in Iraq in the course of a year expended approximated 70 million rounds of ammunition. The government has ordered ten times as much ammo for use by their agents here at home. DHS also recently placed an order for an additional 750 million rounds of bullets of different caliber and configurations.

Not only this, but the Social Security Administration ordered 170,000 rounds of hollow point ammunition. If one would care to speculate as to why they have done so, consider how many people look to Social Security for their income. Where do you suppose a lot of people will go when their checks do not arrive, or they are unable to cash them, or their direct deposited money is not available in the banks? They will go to the local Social Security office, and they will be angry. As a precaution the government is supplying ammunition to the security staff at these buildings ahead of time.

See the following articles to read about this subject.
http://dailycaller.com/2012/08/17/who-does-the-government-intend-to-shoot

People of God, I have already related through this blog those recent physical preparations the Father has directed me to make to be in readiness for days of dislocation and financial collapse. I have consistently advised people that they should be seeking the Father to know what He would have them to do. Yahweh is not directing all people to do the same thing. I know some who have been led to live in homes in specific locations during this season. Others are led to acquire mobile habitation, such as a motor home or travel trailer. What is important is that each person be sensitive to the voice of the Spirit and obey whatever Yahweh directs YOU to do.

I have often told people to ignore what the government is saying, and to observe what they are doing. Yahshua gave the same advice when seeking to discern an individual’s character. He said they would be known by their fruit. If you have not read the article entitled “Others Are Preparing – Should You?” I would encourage you to do so. It details some of the obvious actions the government is taking in preparation for days of great civil unrest.

Another brother wrote to me this morning to forward me a brief devotion by chip Brogden that he felt tied in well with yesterday’s blog post. I agreed with him. The message of being Spirit led is fundamental to the subject of following Christ through a wilderness experience. Following is the post brother Ken forwarded to me:

Walk in the Spirit. If you begin to be led by your feelings then you’ll make the wrong decision every time. Most of the time, the right decision doesn’t feel good. Doing the right thing is usually difficult. The easiest thing to do is to quit, to give up, to go back to Egypt. But I’m telling you, get to the place where going back is no longer an option – then going back is no longer a temptation.

A sister in Christ from the East Coast wrote to remind me of an e-mail she had sent some months back when she and her daughter were traveling on I-40 West in Tennessee. They were caught in the middle of an accident with trucks and cars crashing around them, but Yahweh miraculously preserved them.

Hi Brother Joseph,
I wanted to take some time to share with you what happened to my daughter and I today while traveling in Tennesee. It is a testament of God’s awesome protection and power. I am a bit tired right now and don’t quite have the mental energy to type it all out, but wanted to share the pics and alittle of what I wrote on facebook today. Thankful to be writing this unscathed! Many Blessings!

My daughter and I are currently at a hotel taking quite a few deep breaths, very thankful for life and completely and utterly amazed at the power of God!!! We were just involved in an accident on I-40W involving about 5 tractor trailers and 3 cars…everyone made it out alive and 3 people only had scratches!! Truly the protection of God and His angels!!!!!! I have a slight scratch on my car..God used my daughter to interpret spanish, and us to pray for others and help EMS, etc. We are thankful for a young woman named Alison who also jumped in and for the truck driver that risked his life to spare hitting my car and others!!!! He crashed into another tractor trailor and all these people made it out alive! Glory to God in the highest!!!! We all prayed together and the man who risked his life was wearing a purple shirt. After all settled we decided to just stop at the next hotel! When searching for a hotel we passed a sign that said Purple Heart Trail, made me think of the man who risked his life in this accident wearing the purple shirt. I pray God will bless Him and he will be in awe of His power, protection, and love!

This sister provided some pictures of the accident site, and they are quite dramatic. 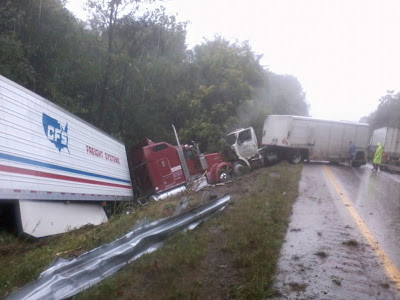 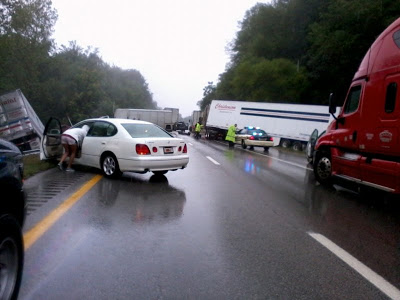 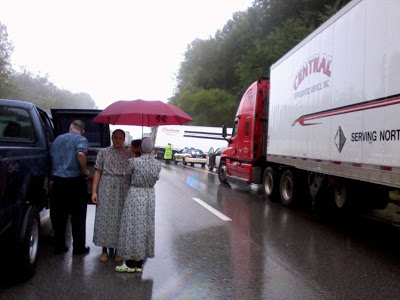 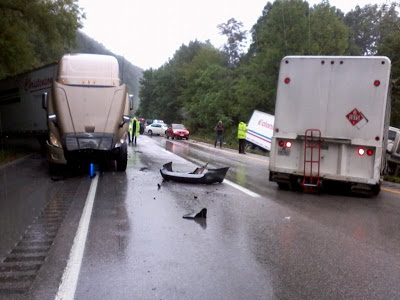 Yahweh has been using the symbolism of a crash to indicate what is coming to the nations. A crash is something that occurs with great suddenness. There is no time to prepare once the crash begins. All preparation needs to be done ahead of time. Even as in a car a driver and passenger should take precautions ahead of time, wear their seat belt, make sure tires are inflated properly and have adequate tread, insure brakes are functioning well, etc., so too those who listen to the voice of the Spirit and perform the preparations He instructs them to make will find themselves ready for that hour.

There will be some, like this sister and her daughter, who will find themselves right in the middle of the crash. They will observe the collapse of infrastructure all around them. They will see all forward motion in society come to a complete halt. Yet, in the midst of it all they will be protected. Undoubtedly, just observing what is about to take place will shake the most godly among us (to quote a phrase by the late David Wilkerson).