There are some things the Spirit is communicating to me along this trip across the nation. I am continually reminded that the Father has not sent me out to the masses of Christendom, but to a remnant who are destined to come forth as overcomers in these last days. Some time back I wrote an article titled That I Lose None. In it I stated the following:

The heart of Yahshua is the heart of a perfect Son. A perfect Son is consumed with the dreams of His Father, and He yearns to see them fulfilled. Christ always had in focus those things which were the Father’s will and pleasure.

In the mind of the Father He sees the total number of those appointed to sonship. He has determined the precise number of the righteous who will attain to the first resurrection from the dead, being the firstborn among the creation. He does not want any of this appointed number to be lost, yearning that they might ALL be raised up on the last day of this present age.

Christ ever kept in mind the number of those appointed to salvation in this age, and He labored to not lose a single one of them.

Matthew 18:14
It is not the will of your Father who is in heaven that one of these little ones perish.

The Lord sought to instill this same passionate focus in the minds and hearts of His apostles. After His resurrection Peter and a number of the disciples went fishing. They had labored all night and had caught nothing. In the morning as they were some distance from shore they saw the Lord on the beach. He told them to cast their net over on the right side of the boat, and the nets surrounded a great catch of 153 large fish.

Earlier in the ministry of Christ the disciples experienced a similar event, and their nets began to break, and fish were lost. This time the outcome was different. Their nets did not tear, and they hauled every single fish in the net to shore, losing nothing.

John 21:11
Simon Peter went up and dragged the net to land, full of large fish, one hundred and fifty-three; and although there were so many, the net was not broken.

One hundred and fifty-three is a very precise number. It is not an estimate, nor is it rounded off. It is an exact tally of the number of fish in the net, and none were lost.

Christ was seeking to reveal to His disciples a profound truth. God has determined in His mind the exact number of His sons to come to maturity in this age. He has known them from before the creation of the earth, and has called each of them by name.
[End Excerpt]

As I have been traveling I have been aware that it is a remnant to which the Father is sending me. He has not sent me to speak to the multitudes who are dull of hearing. He has appointed me to encourage and strengthen His sons and daughters who are willing to count the cost of discipleship and to pay the cost.

As I was in Fort Wayne, Indiana the Lord provided a remarkable testimony to this. I had been introduced to a brother in Christ via the Internet, and I had never met him face to face. Patty Hunt on Long Island was well acquainted with this brother in Christ, and she much wanted the two of us to meet. I also discerned this to be the will of the Father. I invited this brother in Christ to meet me for lunch.

On my way to meet him I was stopped at a red light in Fort Wayne when the Spirit drew my attention to the license number of the car in front of me. I was so impressed that the Spirit was speaking something that I took a picture of the car. 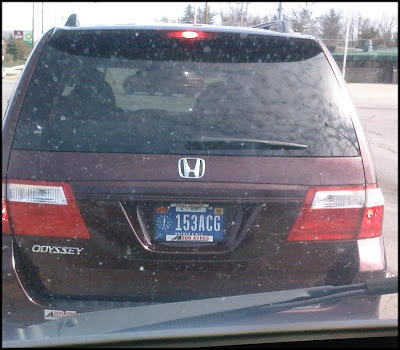 This man was also considerably taller than me. He was indeed a “large fish.”

John 21:11
Simon Peter went up, and drew the net to land, full of large fish, a hundred and fifty-three…

By such things the Spirit has reminded me that His focus is not upon large numbers of people in this hour. He has set His eye upon those who are appointed for salvation, and it is His will that none of these be lost.

Along the way I have also found that many people with whom I am meeting have embraced a variety of doctrines. Some of these doctrines I know to be error, for the Spirit of Christ has instructed me in many areas and led me to understand things that He has set His seal upon.

As I have met with these saints I have not been led to discourse with them on a wide variety of doctrines. I have sensed the Spirit bearing witness that it is not His will that I be drawn into discussions that are outside of His will for this time, but that I remain focused upon what He sent me to proclaim.

Recently I wrote a blog titled The Called Out. In it I shared the following:

Many people who say they are Christ-ians (members of Christ), part of Yahshua’s body, are yet walking in the mindset of the Greeks (Gentiles, nations), or the mindset of the Jews. The Scriptures readily identify for us the distinct mindset of each of these three groups. You can tell which one you have embraced by examining your life and beliefs. Many Christians are so by confession, but not by profession. They say they belong to Christ, but they are not living as those who are called out from among the Greeks and Jews.

Following are the three overriding characteristics by which we might identify each group.

Christ (both the Head and the body) esteem the Cross…

Matthew 16:24
Then Yahshua said to His disciples, “If anyone wishes to come after Me, let him deny himself, and take up his cross, and follow Me.”

Mark 8:34
And He summoned the multitude with His disciples, and said to them, “If anyone wishes to come after Me, let him deny himself, and take up his cross, and follow Me.”

Luke 9:23-24
And He was saying to them all, “If anyone wishes to come after Me, let him deny himself, and take up his cross daily, and follow Me.”

There is a cross appointed to ALL who are Christ, both the Head and the body of Christ. Those who are truly disciples of Christ will be linked to, and identified by, the cross. The cross is the instrument of victory and transformation for all who belong to Christ…

To the world and a worldly church the disciple’s cross appears as something weak and detestable, but to those who are a part of Christ the cross is the power of God to transform a fleshly creature into a spiritual being.

• Christians with a Greek mindset today seek wisdom and view the disciple’s cross as foolishness.

• Christians with a Jewish mindset esteem power and view the cross as an offense.

• Disciples of Christ who have been called out (ekklessia) from the Greek and Jewish nations see the cross as the wisdom and the power of God.

All Christians fall into one of these three groups. It is the smallest number of the people of God who have embraced the cross, seeing the necessity and the wisdom of it. Most Christians are pursuing knowledge or signs, or both APART FROM THE CROSS. This is folly, and must be corrected in this last hour…

Christians who esteem wisdom and knowledge while rejecting the disciple’s cross fail to attain to the form of Christ. Christ LEARNED from SUFFERING and so to must all who are part of Christ.

Hebrews 5:8
Although He was a Son, He learned obedience from the things which He suffered.

These parallel phrases should never be disconnected.

Many Christians today are pursuing learning while doing everything they can to avoid suffering. Their knowledge is therefore distorted, corrupted, and full of error.
[End Excerpt]

As I have been traveling the Lord has borne witness to me that He would have me proclaim the cross of Christ. When the people of God embrace the cross appointed to all disciples of Christ, their doctrine will begin to correct itself. Erroneous doctrine often comes from esteeming knowledge while rejecting the cross. The solution to this is not to merely refute the error, but to bring the child of God to embrace the cross, apart from which none can be perfected.

I have found a remarkable consistency among those saints who are following the path of the cross. They have far more agreement in their doctrines. The crucified life has brought them to a place of dividing between soul and spirit, and they have recognized much that was soulish in their beliefs and have been led to the truth by the Spirit of Christ.

For those who are called to teach the saints in these days, the role of the cross should ever be kept in mind when they begin to address doctrinal errors.