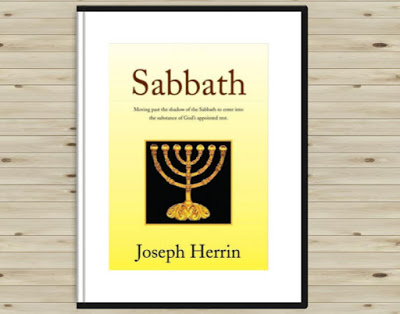 About 16 years ago I was just starting out in ministry. I didn’t know how many books Yahshua would have me to write. I had only written one so far, but I had it on my heart to write the book titled Sabbath. I had no idea the Father would have me write more than 20 books, and many smaller writings. The blog site called the Parables Blog was still off in the future about 7 years. I had just the Internet site called Heart4God.

I was 40 years old. I say the book Sabbath was on my heart to write. It wasn’t what the word Sabbath brings to most people’s minds, however. Even today I find that most people who hear the word Sabbath don’t think anything of the parables that are hidden in it. The Sabbath is such an important thing for most people, but few ever get beyond what was done in the Old Testament. Most people when they think of Sabbath they are reminded that one day out of seven the Israelites were not permitted to do any work. The laws regarding Sabbath were so strict that a person was to be stoned to death for doing any work on that day.

When I was raised in the Conservative Baptist Church I heard plenty about the Sabbath. The parables regarding the Sabbath were unknown to them however. They surely didn’t think the Sabbath was a law to kill over, but they did take it seriously. The church always spoke of meeting on the Sabbath, and my family was one that rarely ever missed a day. Sabbath to them had been corrupted to mean Sunday. The true Sabbath was Friday at sunset to Saturday at sunset, but I never heard that explained at church unless we were reading the first chapter of Genesis. There it was evident that the day started in the evening and went until the next evening. Sabbath was the seventh day of the week when Yahweh did no work, which was why we were to do no work either.

It is amazing that as old as the earth is, that seven days make up the week. Though certain countries have tried to make their weeks based on other values, such as 10, they have always gone back to seven. Mankind would not function as well based on other values. The French attempted a 10 day calendar after the revolution, but it only lasted about 12 years. The month that we now use is a poor divider of time. The months range from 28 to 31 days, depending upon which month was honored the most. Longer months would steal days from shorter months. The months were named after Roman’s, Roman gods, and periods of purity. The fact that we still use a Roman calendar is evidence that Satan is alive and active.

The Biblical calendar originally had days that were numbered “the first, the second, the third, …, the seventh.” The days of the week were numbered according to their day of creation. It took Yahweh six days to create all things, and on the seventh day He rested. Equally, the months of the year in the Bible were lunar. Each month began with the sliver of the new moon showing, and ended with it disappearing. It was 28 days. They were called “the first month, the second month,” and so on. There were 13 months in a year, which equates to 364 days. The fact that we have months that are named in the Bible is a result of Israel being taken captive to Babylon. The months of the Hebrew calendar are all Babylonian names.

There was an attempt to change the calendar back around the 1930’s. The League of Nations at one time was considering 185 different calendars. Some could have had much more reason to them than the Roman one we now use. Still, it has seven days of the week, even if the days are named after Roman gods.

So what about the Sabbath day, or Saturday (Saturn’s Day). In Hebrew Sabbath means seventh or rest. That makes perfect sense if you are taking the Biblical meaning for the day. Does this mean we are supposed to rest every seventh day? If you are a Seventh Day Adventist you may think so. They have missed all the parables in the day though. Jesus Christ/Yahshua the Messiah said that He was Lord of the Sabbath. Let’s take a quick look at the meaning in the New Testament. Christ said:

John 5:30
“I can do nothing on My own initiative. As I hear, I judge; and My judgment is just, because I do not seek My own will, but the will of Him who sent Me.”

John 8:28
Yahshua therefore said, “When you lift up the Son of Man, then you will know that I am He, and I do nothing on My own initiative, but I speak these things as the Father taught Me.”

John 8:42
Yahshua said to them, “If God were your Father, you would love Me; for I proceeded forth and have come from God, for I have not even come on My own initiative, but He sent Me.”

John 12:49
“For I did not speak on My own initiative, but the Father Himself who sent Me has given Me commandment, what to say, and what to speak.”

John 14:10
“Do you not believe that I am in the Father, and the Father is in Me? The words that I say to you I do not speak on My own initiative, but the Father abiding in Me does His works.”

Yahshua gave this command to all who would be like Him.

Matthew 7:21-23
“Not everyone who says to Me, ‘Lord, Lord,’ will enter the kingdom of heaven; but he who does the will of My Father who is in heaven. Many will say to Me on that day, ‘Lord, Lord, did we not prophesy in Your name, and in Your name cast out demons, and in Your name perform many miracles?’ And then I will declare to them, ‘I never knew you; depart from Me, you who practice lawlessness.’”

Who will enter into the kingdom of heaven? He who does the will of the Father who is in heaven. Are you not called to enter into heaven? Christ could not do the Father’s will by prophesying, by casting out demons, by performing many miracles. He only did the Father’s will in each case if the Father was directing Him to do it. When He went to the pool of Bethsaida and healed one man that had been there for many years, He could have healed many people, but God had not told Him to. How many of us perform works that we say are for Yahshua/Jesus and He has not commanded them.

Let us look at the instructions of the apostles to see if they taught the same thing.

Hebrews 4:9-11
There remains therefore a rest for the people of God. For he who has entered His rest has himself also ceased from his works as God did from His. Let us therefore be diligent to enter that rest, lest anyone fall according to the same example of disobedience. For the Word of God is living and powerful, and sharper than any two-edged sword, piercing even to the division of soul and spirit, and of joints and marrow, and is a discerner of the thoughts and intents of the heart.