Genesis 41:49
Thus Joseph stored up grain in great abundance like the sand of the sea, until he stopped measuring it, for it was beyond measure. 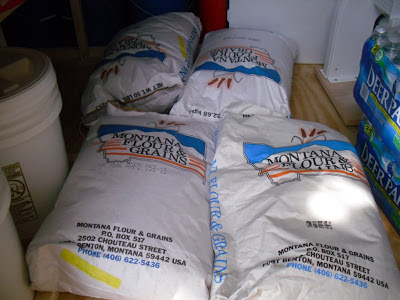 Pictured above is the first of my grain acquisitions. I found a local country market that sells bulk grain at a good price. Fifty pounds of red hard summer wheat is $39 and the same amount of white hard winter wheat is $35. Since I was able to pick it up myself, there was no additional shipping cost. 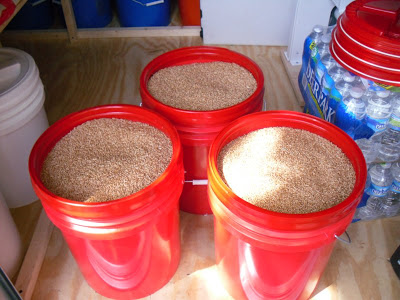 Yesterday I ground some of the red wheat and baked a loaf of whole wheat bread. I am saddened that I waited so late in life to begin eating fresh, whole grain bread. Although I have been purchasing whole wheat bread at the grocery stores for many years, there is no comparison to the taste and nutritional value of bread made from grain one has milled themselves and baked fresh. 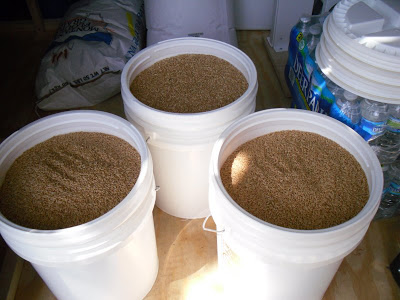 If you look closely you can see my hand prints in a couple of the buckets in the photo above. I just had to get my hands in the grain. It feels wonderfully wholesome. Maybe I am getting a little carried away, but I am enjoying this assignment the Father has given to me to store up grain and to eat a simpler and, what is assuredly, a more healthy diet.

The same country market had a number of other products available, but they will have to order them in bulk for me. I spoke with the store owner and gave her my order. It consisted of the following:

Being a small country market, the owner told me she would not be placing another order until the 23rd of this month. I thought about it for a moment and sensed that the Father had guided me to this store and would have me to make my purchases there. The thought occurred to me that the date the order would be placed is 5/23. As I have mentioned a number of times, the Father has frequently used the numbers 5 and 23 together to denote His grace (5) for provision (23 – as in the 23rd Psalm; “The Lord is my shepherd. I shall not want.”) It seemed fitting that this order to be used for provision in days of trouble would be placed on this particular date. It is the Father’s grace that is guiding me and enabling me to make this provision. The order should arrive about a week later.

Just doing a rough calculation, and assuming that the same weight of beans will take up more storage space than the fine grains of wheat and rice, I believe I will be pretty close to filling up my 42 storage containers with grains and legumes. The only item the owner was not able to obtain for me was hulled barley. She carries pearled barley, but I did not want it pearled. Pearled barley has the inedible hull of the grain removed, and also the bran. Hulled barley preserves the bran, removing only the outer hull. The bran contains many essential nutrients as well as dietary fiber, so I told her I would look elsewhere. I was able to find what I wanted on Amazon. 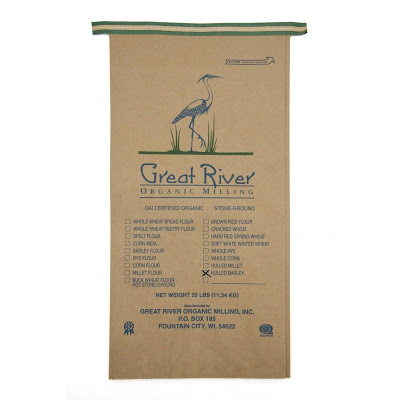 The bird on the bag looks like a heron (Herrin). Personally, I don’t see much family resemblance, but I have always liked herons.

I am seeking to be sensitive to the leading of Yahweh’s Spirit in the purchases I am making. I sense Yahweh guiding me in various ways, as well as affirming certain steps I am taking. I had ordered silica desiccant packs to put in the buckets to absorb moisture, but the shipment got lost and Amazon refunded my money. I began pondering whether the Father may have me to not use the silica gel. I had mentioned previously that I had planned to use dry ice to remove the oxygen from the buckets. Having looked though the phone books and the Internet, I could not find any local companies that sell dry ice. The primary purpose for wanting to use the dry ice was to kill any insects and larvae in the grain. As the dry ice melts (actually it sublimates, turning directly to CO2 gas), it pushes the lighter air out of the buckets. I have purchased flour before, especially the whole wheat flour, and had weevils to infest it. Their larvae was in the flour when I purchased it and hatched out.

I found a way to overcome this when I was just dealing with five pound bags of flour. I would put it in the freezer. This is not a possibility when I am storing up five gallon buckets of grain. As I was pondering this today the words “diatomaceous earth” kept popping into my mind. I had read somewhere about a week ago that some people used diatomaceous earth in place of oxygen absorbers in the grain and food storage. I had no idea what diatomaceous earth was, or how it was used. When it kept popping into my mind today I sensed that I had better look into it. I am glad that I did. Following is an excerpt from a website.

Howdy all! I just ordered and received my Diatomaceous Earth (DE) and I’m so excited to add it to my wheat to keep those pesky bugs out! But I also wanted to share some information with y’all that came with my order. I ordered my DE from Earthworks Health because it had the best price I could find (including the shipping) for the amount I wanted to order (I got a 10 lb bag). Anyway, they shipped it to me super fast, and when I opened the box there was a slip of paper that had all sorts of good information with uses for DE. I thought I would pass it on for your information and I will just relay their entire flier to you…


“Diatomaceous Earth (DE) has many applications. Some of the things that people are using DE for are as follows:


HUMAN USE:
Many people, including all of us here at earthworkshealth, are taking food grade DE every day. You might ask, “How can something that kills bugs be good for people?” Remember, DE kills bugs by scratching them–no chemicals are involved. For people, DE is a source of available silica. Silica is a major mineral we all need that is lacking in our foodstuffs today. Most are taking 1 Tablespoon of DE per day in juice, water, pop, applesauce, yogurt, protein shake, or liquid of their choice. After hundreds of feedbacks, this is what we are hearing from people:

I reviewed a number of websites on this topic and found that diatomaceous earth is quite popular among preppers who are storing up grains and food. It takes approximately one cup of diatomaceous earth in a five gallon bucket of wheat, or other grain, and bug problems are gone. At the same time, when the grain is ground it has the added benefit of being enriched with a small amount of diatomaceous earth. The following was taken from another website.

Diatomaceous Earth
1 – 2 cup per 5 – 6 gallon bucket
1 pound = 6 cups which is good for 300 lbs of grain.
The earth pulls the moisture out of the weevils and they dehydrate with no way of regaining it. Once you open your bulk storage use this to prevent infestation. Also good for storing grains for sprouting because grains stored in CO2 or with O2 absorbers will not germinate properly. (Dry Ice and CO2 are the same)

Following is a video on using DE in food storage.

Apparently, when oxygen is removed from the storage buckets it not only kills the bugs that are present, but it kills the grain. It will no longer germinate. If a person wanted to make sprouts from their grain, or plant the grain, they would not be able to do so. Diatomaceous earth is a better solution as it does not effect the grains ability to germinate.

One method of adding the DE to the grain is to fill the bucket a third full and add a third cup of DE. Fill it another third and repeat. Then fill the bucket the rest of the way and add the final third cup of DE. Put the lid on the bucket and roll it around until the diatomaceous earth is mixed into the grain. This product can be purchased from Amazon. You want to be sure and get the “food grade” diatomaceous earth. 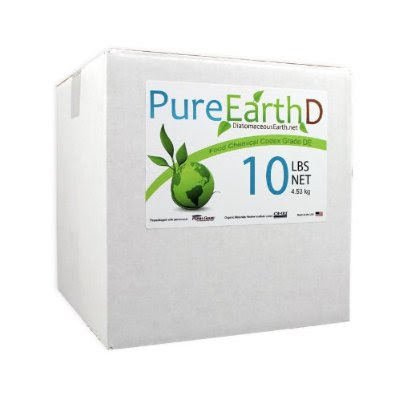 One ten pound box would be sufficient for about 60 five gallon buckets. If you have DE left-over, it makes a great natural, non-toxic insecticide. Many people also powder their pets with it to keep them free of fleas. Or you can use it as a natural dietary supplement for a wide array of health benefits.

I am getting an education as I follow that path the Father has appointed to me. It is well that we stay sensitive to His guidance. If we find that one path is being blocked and another is opening up before us, we should take the time to investigate. Something as simple as an order getting lost in the mail, or the unavailability of dry ice, can be the Father’s way of getting our attention.