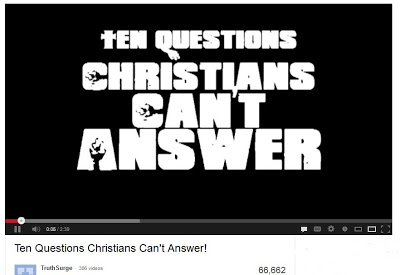 As I was doing some research on the Internet today, I came across a video titled Ten Questions Christians Can’t Answer! The video was made by an individual who holds the view that Christianity is false, and that the Bible contains many glaring errors. I decided to take a look and see what these impossible questions might be. I did not find any of them to be unanswerable, though I suspect that the video’s creator would not like some of the answers.

As I read through some of the comments after the video I found that most “Christians” who were commenting were doing a poor job of answering any, or all, of the questions. Therefore, I have to conclude that the title of the video is largely accurate. Most Christians cannot answer challenges to their faith. A great many Christians do not know their Bibles.

What I decided to do was to take the first question and provide an answer to it. I will then list the remaining nine questions, and invite the readers of this blog to submit an answer to one of them, or more than one if you are so inclined. I will then choose the best answer(s) for each question and post them in an upcoming blog. If you want to view the video yourself before submitting an answer, you can find it below.

Following is question #1 from this video, followed by my answer.


Question #1: When Noah’s ark landed, how did the kangaroos make it back to Australia?

Joseph’s Answer: The Bible declares that the continents were divided AFTER the flood.

Genesis 10:25
And two sons were born to Eber; the name of the one was Peleg, for in his days the earth was divided…

Chapters 6-9 of the book of Genesis recount the story of Noah. In chapter ten we find a genealogy of nations that resulted from the three sons of Noah. This section is often called “the table of nations.” Chapter 10 of Genesis tells us that Peleg was a descendant of Shem, one of the sons of Noah. Peleg was born four generations after Shem. The Bible provides an exact time-line in Genesis chapter 11, verses 10-19. We are told the following:

Shem was one hundred years old, and became the father of Arpachshad two years after the flood…


Arpachshad lived thirty-five years, and became the father of Shelah…


Shelah lived thirty years, and became the father of Eber…


Eber lived thirty-four years, and became the father of Peleg…

Both the Bible and science agree that the earth used to be one super-continent. This continent is often referred to by geologists as Pangea, or Pangaea. This name is derived from the Greek “Pan” meaning “entire,” and “Gaia” meaning “earth.” Following is an animation of what the separation of the continents is envisioned to have looked like.

Science often develops theories that contradict the narrative of the Bible, particularly when it comes to the span of time in which an event took place. For example, science would say that languages developed over thousands of years when the Bible says that the different languages came into existence suddenly at the Tower of Babel when Yahweh confused the languages of men and divided them into families. Similarly, science says that continental drift began about 200 million years ago and that the continents drifted apart over the course of millions of years. The Bible, however, states that there was a single landmass as recently as 4,500 years ago, and the earth was divided into continents rapidly. 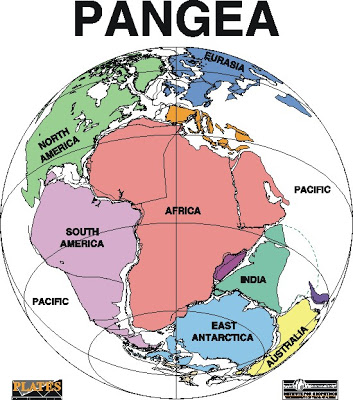 Although present scientific theories differ widely from the Biblical account on WHEN the continents were divided, scientific theory and the Bible agree that all the continents were previously joined together. This explains how kangaroos were able to travel from Mt. Ararat to Australia after the flood of Noah. Science refers to the movement of the earth’s landmass as “Continental Drift Theory.”

As I mentioned, those who seek to dispute the accuracy of the Scriptures, may not like the answer provided. Yet, the Bible does provide answers. Christians should not be daunted when they are faced with a seemingly impossible question relating to Biblical teaching. We have the mind of Christ, and Christ has never been stumped by the questions of critics. (See Matthew 22:23-33)

Here now are the other nine questions presented on this video. If you choose to submit an answer, please consider whether the question accurately reflects what the Bible teaches, or if the question is itself a misrepresentation of Bible truth. Also consider why the speaker is asking these particular questions so you can identify why he believes a Christian cannot answer the question honestly and accurately. I also ask that you submit your answers via e-mail, rather than through the comment field on this blog. They will be much easier for me to handle that way.

Question #2: If the ark was covered in pitch, or tar, to make it watertight, it also made it airtight. How did the animals survive more than one or two days, living in complete darkness without any fresh air? Remember, the rain lasted forty days and forty nights. Noah couldn’t open the window in the top.

Question #3: Since Adam and Eve didn’t know right from wrong before eating from the tree of the knowledge of good and evil, why did God then punish them for something they didn’t understand they were doing?

Question #4: Why would God place a forbidden tree in the garden so close to His innocent creation, and allow Satan to tempt them into eating from it, all the while looking on without doing a thing to prevent it?

Question #5: When the women went to Jesus’ empty tomb, was the stone already rolled away, or did an angel roll it away after the women got there?

Question #6: On the first day of the week, when Jesus rose from the dead, how many women went to the tomb, and which ones?

Question #8: How many donkeys did Jesus ride on His triumphal entry into Jerusalem? Was it one donkey, like Mark, Luke and John say, or was it two donkeys like Matthew said?

Question #9: Matthew and Luke both provide genealogies for Jesus, going all the way back to Adam. Using both of those lists, who was Joseph’s father?

Question #10: Was Jesus crucified on the first day of Passover like the gospel of John says, or the next day, like the other three gospels say?

Note: I will be continuing with the series Push Back as I hope to bring it to completion soon.