Note: Sukkot (The Feast of Tabernacles) begins tonight at sunset.

The word translated as “Booths” is the Hebrew word “Sukkot” (Pronounced “Sue-Coat”). The singular form of the word is Sukkah (“sook-kaw). In addition to being translated as booths, the word is rendered tents, pavilions, and tabernacles. I have had a sense that this particular Sukkot festival would be significant.

Although camping is not an unusual experience for me, I felt it was symbolic when the Spirit impressed upon me to return to Jekyll Island, Georgia to camp there during the month of October. I had been camping the past two months at a campground in Middle Georgia. Camping affords me much quiet time to myself, and I am able to attend to the ministry of writing the Father has called me to.

The thought had arisen that the Spirit would have me to return to Jekyll Island this October. I had prayed and asked the Father that if it were His will for me to camp there that He would reveal it through the presence, or lack, of provision to be able to do so. I also needed new tires on my van, so I asked the Father to reveal what His pleasure was in the matter.

On the day before I would have to leave the campground I had been staying at, I checked my mail, and Yahweh had led a number of saints to send provision. It was quite sufficient for me to get new tires and camp on Jekyll. I had much peace that this was the will of the Father, so I made reservations. I also sensed that some friends were to join me, so I brought along an extra tent.

I was up before sunrise yesterday, and packed up all things in the pop-up tent camper I have been staying in. I drove to Macon and had some minor work done on my van, then I made the four hour trip to Jekyll Island. Everything has been set-up. 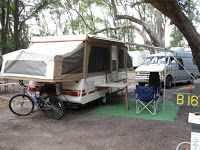 This is the pop-up tent camper I have been using, and my camper/van in the background. Following is another view of the campsite. 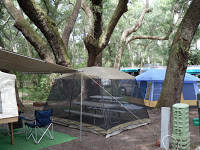 That is my screen over the picnic table, and the blue tent in the background is one that I also just set-up. Since the Lord called me out from my former employment as a computer manager in 1999, I have found that the Spirit has directed me to move very frequently. I noted just this past week in correspondence with another, that there is an interesting parallel found to my own experience and the words of Christ to a Scribe who declared his desire to be Yahshua’s disciple.

Matthew 8:19-20
And a certain scribe came and said to Him, “Teacher, I will follow You wherever You go.” And Yahshua said to him, “The foxes have holes, and the birds of the air have nests; but the Son of Man has nowhere to lay His head.”

Back in 1998 a man with a prophetic gift asked for my assistance in editing a book he had written. After I completed the job for him, he wrote an acknowledgment in the book, and he described me as one who had a call to be a “Kingdom Scribe.” This was not a new revelation to me, but working on this man’s book was a step ordered of the Father. Having gotten my feet wet, and observing what was involved, the Lord then directed me to begin writing books. The first was The Remnant Bride, which was completed in 1999.

Those who walk as disciples of Christ, cannot choose for themselves how they will live, or where, or what standard of living they will achieve. The disciple of Christ must be content with whatever the Father chooses for them. Christ is the pattern for this life of contentment. He was a wanderer upon this earth. He had no permanent place of His own. For the past ten years, neither have I.

There are both challenges, and great benefits, to yielding oneself to the will of the Father in this area of life. A person learns to daily look to the Father for their provision. Security and peace for such ones, is not found in a permanent home, in homeowner’s insurance, in bank accounts, or furnishings. Security must daily be found in Yahweh. Each day it is necessary that He send provision to those who are called to lay down all things and follow Christ. Fears must be overcome, the desires of one’s own soul must be laid on the altar, and a steady focus to accomplish the will and pleasure of the Father must be maintained.

The Spirit has been testifying to me that the past ten years of my life have been preparation for me to serve as a guide to a remnant of His people who will be called to walk in very similar paths in these last days. I am seeing this even at this present time, for the Father is already bringing me into contact with others who are called to walk very similarly. He is allowing me to encourage them, letting them know that this strange path is truly the way that the Father will lead many of His sons and daughters. It was especially hard for me at the beginning, for I had many fears, and I did not understand the ways of the Father in choosing such unusual paths as the instrument to purge, purify and refine His sons.

It was not easy for the Israelites to spend forty years in the wilderness dwelling in tents. They had just departed 400 years in Egypt where they dwelt in houses, and had furnishings and other conveniences. The territory Yahweh had promised to them was a land flowing with milk and honey. There were cities promised to them that they did not build, and vineyards they had not planted. Yet, before they could enter their inheritance, they would have to pass through a wilderness experience where they dwelt in tents.

I believe the Spirit is declaring that this Sukkot is very symbolic. Many of His people are on the cusp of entering into a life where they have no permanent place in this earth. They will be vagabonds, wanderers, being led about by the Spirit. I have heard from many who are at this very moment being uprooted from the places they had been dwelling. Some had thought these places would be a sanctuary for people to come to in days of distress. Yet they are being told by the Spirit to leave these places behind, and to simply go where the Spirit says go.

Many have been directed to buy tents, campers, motorhomes, or some other type of temporary and mobile living accommodation. I do not doubt that many will find that they have no permanent home in coming days, for it has been my experience for the past ten years. The Spirit spoke to me prophetically some time back when I had once more been led to visit Jekyll Island. The very first writings posted to the Parables Blog were written at this place.

The Spirit told me that the van which He had provided to me (miraculously) was symbolic of the call on my life for the days ahead. The van is an Xplorer, and it has a Pioneer sound system in it. The Spirit inspired me to write the articles “Explorers and Pioneers to Serve as Guides.”

I mentioned that I had recently prayed that the Father might also provide the funds for new tires for my van. He did so. When I went shopping for them, I looked for the best value in a light truck tire. I did not specify brand, or tire name. The deal the Father led me to ended up being very symbolic. The Spirit testified that this too was of Him. 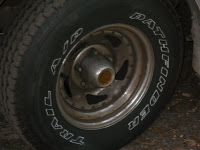 The tires are called PATHFINDER TRAIL A/P (All Purpose). The name Pathfinder fits well with the names Explorer and Pioneer. I believe the Spirit is providing these tires at this season, just before sending me to Jekyll Island to experience Sukkot by dwelling in tents, for the time is very near when many others will be led out from those places they have been “settled” at.

There is a season at hand that will follow the pattern of the Israelites in the wilderness. They were led by the pillar of fire and the cloud. We have the Spirit of Christ to lead us. We must be as attentive to His leading as they were commanded to be. Please consider the following passage and the application it has for those saints who would follow the Spirit obediently today.

There is a profound parable in these words. It was with great purpose that the Spirit inspired the writer to speak in such detail of this matter. We too are called to follow the Spirit. We are to move at His command, and to abide at His command. We are not to be self-willed, choosing for ourselves where we will go and what we will do. We must be content for the Spirit of Christ to lead us.

Every year the Israelites were commanded by Yahweh to build temporary dwellings for themselves. They were to live in these for seven days in remembrance of Yahweh leading their forefathers through the wilderness where they dwelt in tents. Why did Yahweh deem it so important that an entire week of every year was set aside for them to reflect on these things?

Perhaps those who are reading these words will soon have opportunity to ponder this matter during their own wilderness experience. I believe it is close at hand.