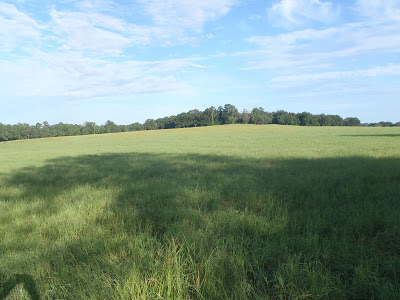 Field On Back and Right Side of Motorhome


I’m almost through moving, though I still have some things to take care of. I have taken care of quite a bit. Let me tell you about it. The move was precipitated by my daughter relocating. She is renting a home in a much better location. It is only about 2 miles from her work, and not far from church. It is also no longer on a dirt road. The past 5 or more years we have been living on dirt roads.

My daughter is gone right now. She has traveled to Pennsylvania with a friend to perform the music for a large body of youth. The arrangement came up all of a sudden due to the planned group having to back out. They drove all the way from south Georgia to Pennsylvania.

No longer being on a dirt road has led both of us to have work done on our cars. She parks up under a porch now, and discovered that her car is leaking oil. She knew it was using a good bit of oil, but the mechanic she took it to could not find the leak. Now she is certain it is leaking oil, which is actually a good thing for her. She dropped the car off before she headed up to Pennsylvania. When she gets back she should have a car that no longer leaks.

My car had begun making a noise going down the dirt roads. I asked my mechanic and he told me it was some joints and seals up front. He told me what to buy and I got them. I also got some new shocks and struts for the front and back as the car has 140,000 miles on it and could use them. This a part of the move that is not done yet. I had told my mechanic I wanted to get moved before having the repairs done. I just gave him a call a few days ago to see when he could get to me. With having to drive nearly three years on dirt roads I consider the wear and tear on the car to be normal.

When I got ready to move I ended up mowing three yards. These were not your normal in town yards, but were the large rural yards that are common down here. My daughter asked me if I could mow the yard we now rent. It needed it pretty bad. I also was expected to mow the yard we were leaving so things would be in better shape than when we got there. Since I had already moved our riding lawn mower I asked Nicholas if I could use his. He had recently moved to the house that was the next door neighbor to our former home. You couldn’t see it from our home, however. He said that it would be fine. Then he asked me if I would feed his dogs for the week, as he was going off to camp. I told him I would. About mid-week through my dog duties I took it upon me to mow his yard too. It was really tall. I have felt like I was a hired lawn guy, for I cut three different yards in one week.

Three days ago my daughter was ready for me to move in. She had gotten the electricity run for a motorhome to use at the back of the property. I had one gentleman drive the bus which was pulling a trailer, and I followed in my RAV4. I then spent the rest of the day setting it up. The gentleman that drove the bus works on both gas engines and diesels. He is very familiar with air brakes. My bus has air brakes. I knew they were not stopping very fast, and he told me what was wrong with them after he drove it over. I had wanted him to drop off the trailer and drive the bus to the gas station to get it filled to the top. It is below 1/4 tank now. After he told me how bad the brakes were I decided to get the brakes fixed first. The cost is a bit high, especially with my car needing repair work too, but the Lord has proven good enough to give me the RAV4 and the bus, and I believe He will take care of them too. 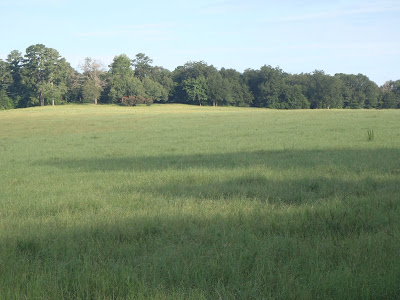 Close-up Shot Across the Field


I really felt good getting my bus over here. It was only about 12 miles, but the bus had not been moved in 4 years. I got my dog Champ’s aerial runner down at the old site and put it up at the new site. It runs 75 feet from tree to tree. He has a trolley that runs from that, giving him lots of room to run. I had to get 100 feet of fence to put alongside the barbed wire fence. Champ would get tangled up around the barbed wire if I didn’t put this in front of it. 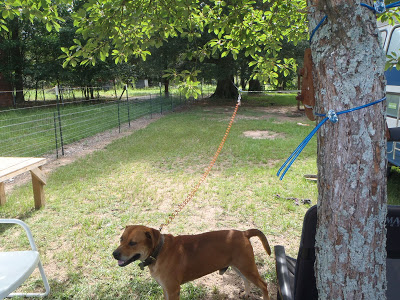 
You can see the three feet high fence in front of the barbed wire. It runs down past the other tree in the back. George came and helped me put it in. George is about three miles away now.

I still don’t have my bus and trailer where they need to go. The former renters have left their mobile barn and their child’s play house. They have been busy getting their stuff, but they have a little left. They are friends of my daughter and she has told them it’s okay to leave the stuff for a few days. There is a good chance they will come by and get it this weekend, and then I will get parked in the way I ought to. 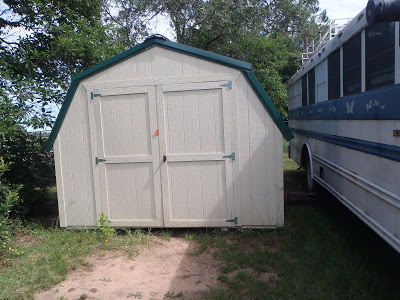 My internet was out when I got here. I was told it would be working, but I have spent three days without it. They are supposed to come later today, and I hope they will get it fixed up. I will have to see how far the WiFi will go from inside the house. I need it to carry to the location of the bus in the backyard.

In a day or two, if all has been done, I will need to get the lawn mower back out and mow once more. I will be down to one yard to mow by then.

P.S. Internet is working now. Got a bunch to do. See ya soon.