Thorns in the Desert – Part 1 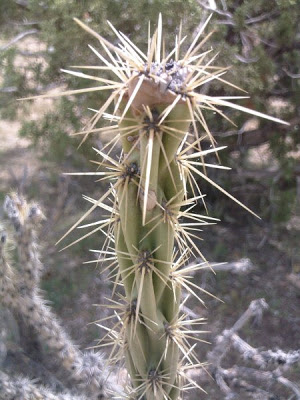 The Father continues to bless me with great fellowship among the saints as I travel across the nation. For the past couple days I have been staying with Randy and Kathy Furman in the desert outside of Arizona. Randy and Kathy are true Christian pioneers. They have been following the leading of the Spirit for many years and were led to purchase 40 acres of desert land where they have been building their own home stick by stick. They have chickens, turkeys, peacocks, and gardens. Their water is trucked in as they do not have a well, so conservation is a necessity.

Things that are taken for granted by a majority of Americans are precious in the desert. This fact is itself a great parable. Yahweh took a nation out of Egypt many years ago to teach them to value what is truly important. A people who fed on flesh and knew the abundance of the Nile River’s waters learned to appreciate the Bread of heaven and the water from the rock.

Yahweh has led a forerunning group of saints into wilderness places in order to produce in them that which is precious. These ones will in turn serve as guides and ministers to a larger remnant who must shortly embark upon the same journey. The purpose of the wilderness is declared by Yahweh in the following Scripture.

Deuteronomy 8:2-3
And you shall remember that Yahweh your God led you all the way these forty years in the wilderness, to humble you and test you, to know what was in your heart, whether you would keep His commandments or not. So He humbled you, allowed you to hunger, and fed you with manna which you did not know nor did your fathers know, that He might make you know that man shall not live by bread alone; but man lives by every word that proceeds from the mouth of Yahweh.

I have been greatly blessed to take walks across the land around the Furman’s home. As I have, the Spirit has been speaking to me parables of the desert. I have noted that nothing grows very tall in the desert. This is due to the scarcity of water. Yahweh said that He let the Israelites know thirst that He might humble them. A lack of water humbles even the plants of the desert.

The word humble comes from the same root as the word humus. Humus is soil, and the word humble speaks of that which is lowly, that which is close to the ground. A person is at times referred to as “down to earth,” indicating that he/she is not proud or extravagant, but they are humble and manifesting good sense. Humility truly is good sense in God’s eyes.

James 4:6
Therefore it says, “God is opposed to the proud, but gives grace to the humble.”

Below is a picture of a Juniper tree. I placed Kathy’s walking stick next to it to demonstrate the scale. 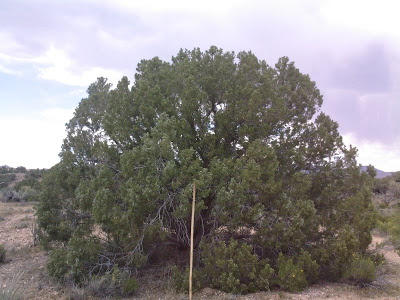 A tree of 15 feet height would be considered tall in such an arid land. You will not find the proud and stately sequoia in the desert. They require far too much water and a cooler climate. The desert produces that which is humble, and it is for this reason that Yahweh will lead His remnant through a wilderness experience in coming days. He must have humble sons and daughters, for this is the character of His dear Son.

Isaiah 53:2-3
For He grew up before Him like a tender shoot, and like a root out of parched ground; He has no stately form or majesty that we should look upon Him, nor appearance that we should be attracted to Him. He was despised and forsaken of men, a man of sorrows, and acquainted with grief; And like one from whom men hide their face, He was despised, and we did not esteem Him.

Christ is compared to a plant growing out of parched soil. Such plants are not stately in form, nor are they majestic. They are humble, and so too was the Son of God.

Will not the Father use the same experiences to shape all those sons and daughters who are destined to be conformed to the image of Christ? Will He not let them know desert times when their flesh is not satisfied, and the appetites are not fulfilled? He will teach His remnant to be content to live only for His will and pleasure, finding their satisfaction in doing the will of the Father.

I have had the pleasure of meeting with a number of saints whom I know have been learning the contentment of little. These are not the stately, impressive men and women that the church parades across their stages, full of the success and possessions of the world. They have not outward appearance that men should desire them. Yet in the eyes of God they are exceedingly precious.

An hour is at hand when God will raise up a body of humble sons and daughters. They will be exceedingly precious in His sight, though scorned by the world and a worldly church. They will be trained in the same way that God trained the Israelites many years ago. Yahweh will lead them to depart from Egypt which serves as a symbol of the world. They will be directed to put aside an appetite for fleshly things and to feed on that which comes from heaven.

Many will find the adjustment hard. Some will cry out for flesh to eat, remembering the things that they once had in days of abundance when they lived in the world and were not walking as aliens and strangers as God intended. Most Christians have been in the world and embracing all its values, but God in His mercy will lead them out that they might embrace His values. He greatly esteems humility and obedience.

I pray that those who read this blog might heed the call of God. When the Spirit woos you to lay aside all attachment to this world, may you find the courage and desire to obey. Many will refuse to come out of Egypt. They will find the path God chooses to be too lowly and will despise it even as the world viewed Christ and His life in the same way.

The Son of God had no castle. He had no glorious home or great possessions. He walked as a vagrant and a pilgrim across the land. He sought only to do the will of the Father. So too must all seek the same goal if they are to be numbered among the overcomers on that day.