A Time to Fear God

Please take a moment to read the following verses with understanding before proceeding further.

Hebrews 4:1
Therefore, let us fear if, while a promise remains of entering His rest, any one of you may seem to have come short of it.

Romans 11:20-22
Do not be conceited, but fear; for if God did not spare the natural branches, He will not spare you, either. Behold then the kindness and severity of God; to those who fell, severity, but to you, God’s kindness, if you continue in His kindness; otherwise you also will be cut off.

Hebrews 2:1-3
For this reason we must pay much closer attention to what we have heard, so that we do not drift away from it. For if the word spoken through angels proved unalterable, and every transgression and disobedience received a just penalty, how will we escape if we neglect so great a salvation?

Hebrews 12:25-29
See to it that you do not refuse Him who is speaking. For if those did not escape when they refused him who warned them on earth, much less will we escape who turn away from Him who warns from heaven… Therefore, since we receive a kingdom which cannot be shaken, let us show gratitude, by which we may offer to God an acceptable service with reverence and godly fear; for our God is a consuming fire.

There is a false depiction of Yahweh presented to the church today. He is described as a God who wants you to be happy, who is ever loving, and full of mercy. The kindness of God is presented to those who attend the churches today, while His severity is ignored. In an hour when Christ’s church is being shaken, when hidden faults are being exposed (consider the parable of the Christchurch earthquakes), when many churches built by man will not stand, the saints of God need to walk in the fear of God. There is a need to be focused upon offering to God an acceptable service with reverence and godly fear.

Today, the preaching of many ministers would indicate that any service offered to God is acceptable in His sight. The standard of service offered to Yahweh by the church has hit bottom because there is no fear of God before man’s eyes.

It is not possible for the saint to exist in such an environment and not feel the degrading pull of its influence. I have written recently of Yahweh’s chastisement of my life. He broke my leg when I was carelessly sating the desires of the flesh. I had taken a casual attitude about obeying the Father in the things He had spoken to me about ruling over the appetites of the flesh. The moment my leg broke the fear of God was renewed in me. I understood that Yahweh would hold me to a stricter judgment. I am a teacher of His people declaring to them the need to deny themselves and follow Christ. Yet, it is not just teachers who need to walk in the fear of Yahweh at this time. Judgment is at the door of the house of God. Yahweh is examining His people and His hand of correction will pass-over only where He finds that His sons and daughters have given heed to removing sin from their lives, seeking a conformity to Christ who always lived to do the Father’s will.

The Spirit within me would lead me to stir you up. Now is not the hour for complacency, for careless living, nor to offer to God a lukewarm devotion. We stand at the end of the age. Satan’s kingdom is rising. Babylon is being built in the earth. Just this past week the major news outlets all ran stories on the One World Trade Center’s progress. The roof of the building is now higher than that of the Empire State Building. It is the tallest building in New York City, and will soon be the tallest building in America. 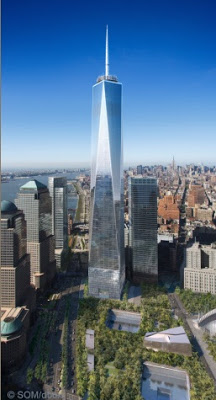 Artist’s Rendering of the Finished One World Trade Tower

You can read more on what is signified by this building being constructed at the following link:
https://heart4god.ws/wordpress/2012/02/babylon-rising.html

Babylon, the kingdom of Satan in this world, is built by ascending upwards in pride through the work of men’s hands. In contrast, Zion, the kingdom of Yahweh and of His Christ, is built as men abase themselves, walking in the fear of Yahweh, giving reverence to their Creator and offering to Him service that is worthy. We must decrease that Christ might increase in us.

Among Yahweh’s remnant there are those who are being led lower. While the majority in the church are still focused on prosperity, ease, and material blessing, there are those who are being asked to empty themselves, to accept a more humble life, to abase themselves freely at the leading of the Holy Spirit. When God shakes all things it is the humble who will be spared from falling. They will already be walking in lowliness and humility of mind before the Father.

Satan’s kingdom is visibly being built in the earth. Even as the One World Trade Tower is rising there are great strides being made to bring the entire world under one world governance. Additionally, the sovereign strength of individual nations is being eroded through financial and political means. Soon a great worldwide financial crisis will strike and one can be assured that a proposed solution will already be prepared. This solution to the world’s crisis will be the implementation of a unified world monetary system. Such a system will require global governance to be imposed upon all nations. Such is Satan’s plan to establish a visible single government over the entire world. This transition will only be achieved through great disruptions of peace, and prosperity. The earth will reel under the chaos that ensues when people’s money is devalued and their freedoms curtailed. Riots, rebellions, and insurrections will give the globalists the justification they need to implement martial law and to re-write the laws of sovereign nations.

Those observing the acts of Congress and the President can see a steady preparation for a planned time of civil unrest. In January President Obama signed into law the National Defense Authorization Act for 2012. This was followed in March by his signing of the National Defense Resources Preparedness Act. Congresswoman Kay Granger from Colorado has posted the following statement on her official website.


With all that is going in Washington these days some things don’t make the news the way they should. Fourteen days ago President Obama issued an Executive Order that you should know about.  This order gives an unprecedented level of authority to the President and the federal government to take over all the fundamental parts of our economy – in the name of national security – in times of national emergency.


This means all of our water resources, construction services and materials (steel, concrete, etc.), our civil transportation system, food and health resources, our energy supplies including oil and natural gas – even farm equipment – can be taken over by the President and his cabinet secretaries.  The Government can also draft U.S. citizens into the military and force U.S. citizens to fulfill “labor requirements” for the purposes of “national defense.”  There is not even any Congressional oversight, only briefings are required.


By issuing this as an Executive Order the President puts the federal government above the law, which, in a democracy, is never supposed to happen…
[Source: http://kaygranger.house.gov/weekly-enewsletter-executive-order-you-should-know-about]

The mainstream media has been silent when it comes to speaking out against the threats to people’s freedoms that are occurring with increasing regularity. Let the wakened Christian understand that there are great dislocations of life near at hand. The Spirit has been testifying of days of tribulation to come. He has been encouraging Christians to yield their lives to be led of Him that they might learn now what it is to stand in faith and trust in the Father.

This is an hour when all Christians should be walking carefully. Heed the voice of the Spirit. Obey quickly and thoroughly those things the Father is speaking. Put away from yourself all sin and self-indulgence. Humble yourselves now that perhaps you might be hidden in the day of His wrath.

It is the by the will of Yahweh that the nations have been given into the hands of wicked men skilled in destruction. The freedoms and prosperity of the nations have been used to pursue a course of abominations and sensuality. The church has been swept away in its pursuit of the world and the things in it. The hour is near at hand for Satan to wrest control of all things. Though he masquerades as a bringer of peace and a lover of mankind, he comes only to kill, steal and destroy.

Do you perceive the hour you live in? Do you suppose that the legislation mentioned above was passed without foresight and planning in anticipation of its being needed soon? Wake-up! Yet in your wakefulness do not act rashly out of fear, or be led by the impulses of your soul. Press into God. Ask Him to prepare you for this day and hour. Do not suppose that the preparation will be material only. Yahweh is above all else seeking to purge, purify and refine a people in anticipation of His Son’s soon appearing.

Let us walk in the fear of God.