To the Angel of the Mormon Church… 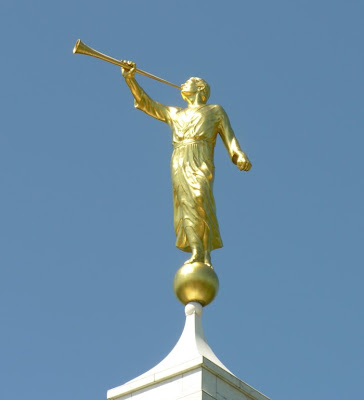 Angel Moroni atop a Mormon Temple

SOUTH JORDAN, Utah (AP) – Mother Nature left her mark on a new Mormon temple over the weekend when a lightning strike hit the building, blackening the golden angel that tops it.

The 60,000 square-foot Oquirrh Mountain Temple of The Church of Jesus Christ of Latter-day Saints was hit Saturday during a rain storm.

Church spokeswoman Kim Farah says no structural damage resulted from the strike on the Angel Moroni. She says a crew will re-gild the 10-foot-6-inch statue soon.

Most Mormon temples are topped with a statue of the angel, who Mormons believe led church founder Joseph Smith to the golden plates from which the Book of Mormon originated.

The Oquirrh temple is Utah’s 13th and the 130th church temple worldwide. It will open in late August and will serve an estimated 83,000 Latter-day Saints.
[End Article]

You will note the prominence of the number 13 in this event. The Oquirrh Temple is Utah’s 13th Mormon Temple and the 130th Worldwide. The angel was struck by lightning on June 13th. Below is a picture of the Oquirrh Mountain Temple. 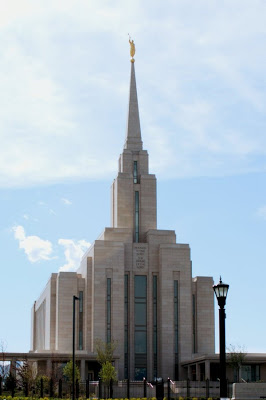 The main construction of the temple is complete, and it is open for the public to view this month, but dedication services and actual use of the Temple are not scheduled until August.

Beyond doubt there is a profound message in this event. The statue of the angel Moroni being struck by lightning and his image tarnished, requiring that it be re-gilded, can only be viewed as an act of divine judgment. We can understand more clearly the reason for the judgment when we understand the significance God attaches to the number thirteen. E.W. Bullinger, in his book Number in Scripture shares the following information.

Unfortunately, those who go backwards to find a reason seldom go back far enough. The popular explanations do not, so far as we are aware, go further back than the Apostles. But we must go back to the first occurrence of the number thirteen in order to discover the key to its significance. It occurs first in Gen 14:4, where we read “Twelve years they served Chedorlaomer, and the thirteenth year they REBELLED.”

Hence every occurrence of the number thirteen, and likewise of every multiple of it, stamps that with which it stands in connection with rebellion, apostasy, defection, corruption, disintegration, revolution, or some kindred idea…

But it is when we come to GEMATRIA that the most wonderful results are seen. These results may be stated thus, briefly: That the names of the LORD’s people are multiples of eight, while the names of those who apostatized, or rebelled, or who were in any sense His enemies, are multiples of thirteen… No human foresight or arrangement could have secured such a result beforehand; no human powers could have carried it out in such perfection. No matter where we look, we find the working of the law without cessation, without a break, without a flaw from beginning to end. Only one conclusion is possible, and that is that the Bible has but one Author, an eternal, omniscient Author, designing, superintending, working, and carrying out His own infinite plans.
[Source: http://philologos.org/__eb-nis/eight.htm#205]

The number thirteen is considered an evil omen, a sign of some future evil which is to befall a person or group. The Scriptures associate this number with rebellion and apostasy. Apostasy is defined as a divorce or defection from the truth. We see also that the number thirteen is related to defection and corruption, and truly when Joseph Smith introduced the Book of Mormon to the world in 1830 he led many people into apostasy. These first Mormon disciples met in Freemason’s Lodges in Illinois, which were dubbed Mormon Lodges, and the influence of the Luciferian Freemasonry is observed in their doctrines and practices to this day.

Joseph Smith claimed to have been guided to the golden plates upon which were written the words of the Book of Mormon, by the angel Moroni. Joseph Smith described Moroni as “an angel of light.” Concerning Joseph Smith, the founder and an early apostle of the Mormon Church, and the angel Moroni, the apostle Paul has something to say.

II Corinthians 11:13-15
For such men are false apostles, deceitful workers, disguising themselves as apostles of Christ. And no wonder, for even Satan disguises himself as an angel of light. Therefore it is not surprising if his servants also disguise themselves as servants of righteousness; whose end shall be according to their deeds.

The judgment of God is apparent in the event that occurred on June 13th. This golden angel which was shining brilliantly in the Sun was blackened by a lightning strike. Yahweh has removed the disguise placed upon this angel, revealing its true nature as a messenger of darkness, of apostasy, corruption and rebellion.

Some have concluded that Joseph Smith’s fabrication of the angel Moroni came from his familiarity with the adventures of Captain Kidd.

Some scholars have theorized that Smith became familiar with the name “Moroni” through his study of the treasure-hunting stories of Captain William Kidd. Because Kidd was said to have buried treasure in the Comoros islands, and Moroni is the name of the capital city and largest settlement in the Comoros, it has been suggested that Smith borrowed the name of the settlement and applied it to the angel who led him to buried treasure—the golden plates. Complementing this proposal is the theory that Smith borrowed the names of the Comoros islands and applied them to the hill where he found the golden plates, which he named Cumorah.
[Source: http://en.wikipedia.org/wiki/Angel_Moroni]

I have some correspondence with people who have joined themselves to the Church of Jesus Christ of Latter Day Saints (The Mormon Church). I am persuaded that some of the people of God are found in this church. I also believe the Spirit is testifying to them through this sign that an evil judgment must soon befall all those who have joined themselves to the confusion of Babylon. If the people of God would not share in the punishment coming upon all manifestations of Babylon, they must swiftly come out from among her.

Revelation 18:4-5
And I heard another voice from heaven, saying, “Come out of her, my people, that you may not participate in her sins and that you may not receive of her plagues; for her sins have piled up as high as heaven, and God has remembered her iniquities.”

This event brings to mind a Scriptural association that is made between fallen angels and lightning.

Luke 10:18
And He said to them, “I was watching Satan fall from heaven like lightning.”