Update and a Parable in the News

I have not had much time to post blogs recently as other activities have kept me busy. When I awoke Wednesday the Spirit instructed me to go out that day and get a trailer hitch installed on my bus so that I could pull the cargo trailer Yahweh gave me last year on my 49th birthday. The day I purchased the trailer was an amazing day as well, which I wrote about at the time.

The manner in which the Father ordered my steps to acquire this trailer hitch Wednesday was equally remarkable, and pregnant with symbolism. I cannot share all the details at this time, but I will provide a picture of the new hitch on the back of my bus. 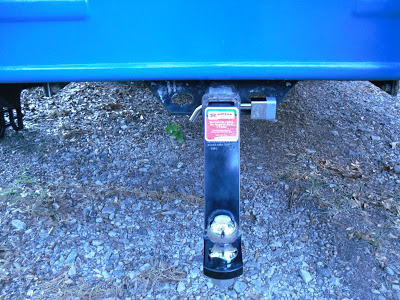 I spent most of a day getting the hitch installed, and procuring the various parts I needed to go in the receiver. I still need to run wiring for the trailer lights. I have purchased the material needed, but have yet to perform the work. I have to tap into the light connections at the front of the bus. Determining which wires to tap into is the difficult part for me. The work itself is not hard.

Thursday morning I rode my bike into town to get the electrical parts needed to hook up the trailer lights. I returned just a few minutes before a brother in Christ, Joe Boes, arrived for a visit. He had driven down from the Atlanta area. We spent the rest of the morning and a good part of the afternoon together. It was a blessed time of fellowship.

Friday I spent the day catching up on e-mail which had been backing up on me due to my other activities. I spent this morning answering what remained.

I have not commented on any articles in the news of late, although there has been plenty that has been significant. An article today caught my attention, and I am led to bring it to the attention of those who read this blog. The news story comes out of Los Cristianos, a Spanish town on the Island of Tenerife. Los Cristianos is Spanish for “Christian.” Following is an excerpt:

Checking a number of news sources, I was able to piece together the details of this event. Decapitation, although shocking, is used significantly as a symbol in the Bible. John the Baptist died by being beheaded. We also read of the saints being beheaded in the book of Revelation.

Revelation 20:4
And I saw thrones, and they sat on them, and judgment was committed to them. Then I saw the souls of those who had been beheaded for their witness to Yahshua and for the word of God, who had not worshiped the beast or his image, and had not received his mark on their foreheads or on their hands.

It arrests my attention when I read of a bizarre beheading in a town named “Christian.” The news details add a further symbolism to the event as the attacker was crying out that he was a prophet of God. An Associated Press article contained the following statement:

Local media reports said the suspect left the store shouting “I am God’s avenger and I come to mete out justice.”

The 62 year old British woman who was beheaded had the first name “Jennifer.” This is a Cornish variant of the name Guinevere made famous by the bride of King Arthur. Although the name means “Fair, white and smooth,” Guinevere was known for her adulterous relationship with Lancelot, and her betrayal of her husband to Mordred. Certainly there are significant things to be observed in this, for the church has also been betrothed to a King, yet has acted the harlot. Indeed, John describes the Great Harlot in Revelation, the Spirit of Yahweh calling out “Come out of her My people, lest you participate in her deeds and partake of her plagues” (Revelation 18:4).

The act of beheading is not intended to be understood in merely a literal sense in the passage from Revelation chapter 20 verse 4. Revelation is a book of parables where truth is conveyed through signs and symbols. The act of beheading symbolizes surrendering one’s own leadership to take Christ as Head. A Christian cannot have Christ as their head as long as their own head remains intact. Paul writes:

I Corinthians 11:3
But I want you to know that the head of every man is Christ, the head of woman is man, and the head of Christ is God.

For Christ to take God as head, He had to remove His own head. He testified to this as He is repeatedly quoted by the apostle John in his gospel as saying, “I never do anything of My own initiative. I only do the will of the Father.” That the Father was Christ’s head was demonstrated conclusively when Christ surrendered to drink from the cup of suffering in Gethsemane. Yahshua testified that his soul was crushed as unto death as He wrestled with this surrender, yet He came forth victorious as He stated, “Father, if there be any other way, let this cup (of suffering) pass from Me. Nevertheless, not MY will, but YOUR will be done.”

This is what it means to have one’s head removed. We must remove our heads to take Christ as head, in the same way that Christ had to remove His head to take Yahweh as head.

I believe the Spirit is testifying through this event that it is time for a number of Christians to experience this beheading. Yahweh is about to accomplish a divine intervention in the lives of many who have until this time not yielded their lives fully to Christ. Some of these have acted much like Guinevere. They were once espoused to Christ as pure virgins, but have gone after other lovers. There has been some betrayal of allegiance, yet they will be able to acquire for themselves white robes as they submit to the experience of beheading.

Revelation 7:13-17
Then one of the elders answered, saying to me, “Who are these arrayed in white robes, and where did they come from?” And I said to him,  “Sir, you know.” So he said to me, “These are the ones who come out of the great tribulation, and washed their robes and made them white in the blood of the Lamb. Therefore they are before the throne of God, and serve Him day and night in His temple. And He who sits on the throne will dwell among them. They shall neither hunger anymore nor thirst anymore; the sun shall not strike them, nor any heat; for the Lamb who is in the midst of the throne will shepherd them and lead them to living fountains of waters. And God will wipe away every tear from their eyes.”

What occurred in this attack in Los Cristianos happened very suddenly. It took place in what was considered to be a very safe place. It was an unanticipated event. Yahweh will do a sudden work in many lives as He leads them to take Him as their head, removing their own head. They will surrender to go where He leads, and to do what He directs. There will be suffering, and sorrow, but also great grace. In the end He will wipe away every tear from their eyes and there will be unspeakable joy.

A couple other details of note are that Los Cristianos is on the island of Tenerife. Tenerife means “white mountain.” The name is derived from the snow capped volcano on the island. Tenerife is renowned for tourism with its sandy beaches where people go to expose their flesh. The second largest Carnival in the world takes place on Tenerife attracting over a million people annually. Carnival is the debauched festival observed in other locales such as Rio De Janeiro, and New Orleans. The word “carnival” literally means “flesh raising.” That Christians have given themselves over to the pursuit of pleasure, and have become fleshly is evident today. There must be a return to the disciple’s cross as the saints surrender to take Christ as their head.

Tenerife is the largest island in the Canary Islands. The Canary is a bird that is associated with alarm and warning, hence the expression “a canary in a coal mine.” Canaries were used before electronic detectors, to warn miners of a build up of methane and other deadly gases in a mine. The canaries, being more sensitive to changes in the air they breathe, would fall over dead if toxic or explosive gases reached dangerous levels, warning the miners to flee to the surface.

I am persuaded that God is about to do a sudden work in the lives of many. Some who have been unwilling to embrace the cross, and walk the afflicted path, will be made willing. They will surrender their heads, and take Christ as head.