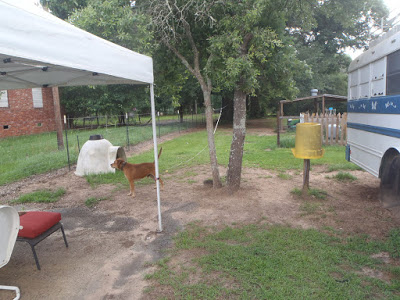 There is Champ, basking in the sun of a mid-day this month. Champ is a good boy. He is six years old now. If you are wondering what the building is behind my canopy, there are three of the buildings side by side. They are all vacant, and quite old. I have been told that they were used for military housing. Each one is a duplex. The closest neighbors I have are straight back on the other side of the trees. It has rained every day for the last three weeks, except for this week. It was a good time to get out and mow the grass.

Below is a picture of Kristin’s house from across the road. You can see all the yard, except the back yard. My bus is back in the rear left of the yard. You can see how green the grass has gotten from all the rain. 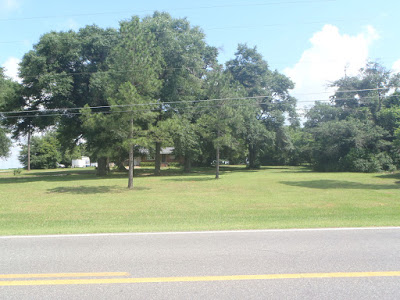 Here is the landlord’s field next to the house. 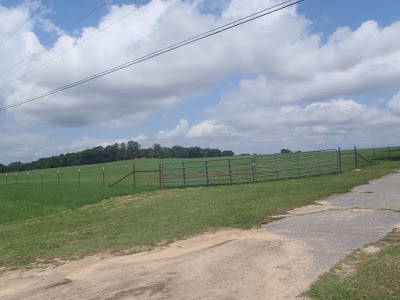 You can see some large dirt mounds at the very back in front of the trees. The landlord is building himself a house there.

July 19th will be Kristin’s last day in the United States. She will be flying out to Poland on that day. She has about a month and a half left. She is flying to California today with three of her friends. She has always wanted to visit Yosemite National Park. She also plans to drive down part of California’s State Route 1. She should get a wonderful view of the Pacific coast. She will be gone for five days.

Kristin and two of her girlfriends have been writing and performing music for about ten years. They have spent the last two months recording an album of their songs. George Young has been doing the editing. They are now done and are moving forward to get the album published. The group name is New Identity and it is also the name of the album. It is a beautiful album and I will let people know how to get it when it is available, which will be in about three weeks.

George Young will be moving into Kristin’s rental house when she moves out in a month and a half. That will give me some continuity here, and I will be able to continue on as normal. I thank Yahweh for moving George to this area. He moved here a little over two years ago, a week before I had my stroke. He came here to be close to me, and has since been able to take over part of the ministry. He is doing the prison ministry which is sending out newsletters to men in prison. The newsletters consist of the books and additional writings that I have written. They keep the men in prison strong and challenged in the things of the Lord. I am confident that the Lord intends for this ministry to go forward. George has gotten about 40 new prisoners on the newsletter list since he has taken it over.