The weather forecasters declared that “Gustav formed suddenly” over the Caribbean. Gustav means “staff of God,” and I wonder if the staff in mind is a rod of correction. God’s judgments do come suddenly, with little warning.
This is one storm I am watching with interest, simply because of the details that seem so pregnant with meaning. Besides the significance of the name of the storm, it is forecast to strike somewhere in the Gulf of Mexico on or around Labor Day. The Lord has been sending so many signs of late about the earth having entered into a time of birth pangs. You may remember the recent blog titled Benjamin’s Portion, speaking of a Benjamin group of overcoming sons being birthed as the mother (the church pictured in Rachel) dies in her birth pangs.
I wrote to someone today and suggested that if I were to script this storm I would probably have it strike Corpus Christi (Latin for Body of Christ) on Labor Day. However, I am not suggesting this as a prophecy at all, for I have not been gifted in the area of foretelling world events. God’s pattern has been to give me understanding of the parables contained in events after the matter is usually concluded and the entire story can be read. God may have a completely different intent with this storm. It does have my interest, for I have seen the Lord using large signs such as hurricanes to speak forth messages to those who have discernment in them.
Recently I wrote about Tropical Storm Fay. I had contemplated the meaning of this storm for a number of days, and had prayed for understanding. I finally concluded that I would simply start writing and see if the Lord would direct me even as I was doing so, for I had found that He had worked in this way on occasion in days past. I had no thought prior to writing of their being any link between Fay and what has been called the Lakeland Revival and the Florida Outpouring. As I wrote, however, this is where my thoughts led me.
Fay was indeed noted for her outpouring of rain. She lingered long over the state, and crossed over every inch of the state, shrouding much of Florida (the Sunshine State) in persistent clouds as she dumped record levels of rain upon the ground. It was said that Fay dumped more rain on the State than two Hurricanes combined did back in 2004. Was Fay a message from God related to the Florida Outpouring? 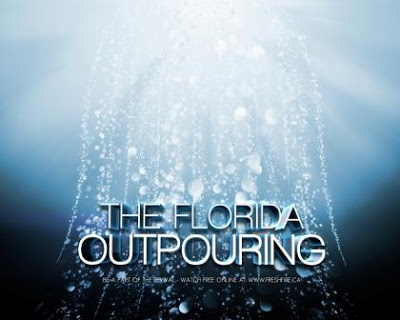 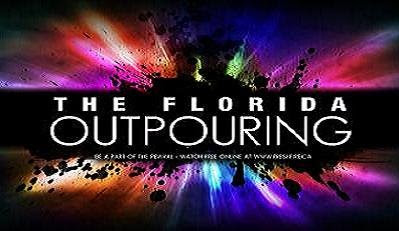 I believe it was. A brother (Bob Schlenker) wrote to me after I posted the article on Fay and commented on the meaning of the name. He wrote:

Fay as a supernatural being with magical powers with which she intervened in human affairs seems to me pretty descriptive of her dance around the state.

In response, I replied:
Yes, this would also seem to be a pretty good description of what happened at Lakeland. Supernatural beings were all the focus as Todd is fixated on angels and spirit guides. He spoke of their being a number of angels that intervene in human affairs, including an angel of finances, and angel of healing, an angel called revival, and numerous others.

I have been reading what various ministers have been declaring about the excesses of Todd Bentley and the Florida Outpouring since it came out that Todd was involved in much sin while conducting the revival. I have read the comments of Dutch Sheets, Peter Wagner and Rick Joyner, and I believe all of them are missing the mark of truly seeing the great evil of this entire event. Great and devastating judgment lies at the very door of the house of God, and many will be the slain of the Lord. There was far more than some matters that were out of order that need to be addressed. The entire movement was unclean from the beginning, and I am prayerfully considering writing a blog on the matter that would seek to reveal how the very foundation upon which it all rested is something other than Christ.

I Corinthians 3:10-11
According to the grace of God which was given to me, as a wise master builder I laid a foundation, and another is building upon it. But let each man be careful how he builds upon it. For no man can lay a foundation other than the one which is laid, which is Yahshua Christ.

From the foundation upward everything about the Lakeland Outpouring was unclean. The entire prophetic movement has embraced concepts and doctrines that lead to excesses of the flesh, an anticipation of soulish thrills, and an expectation of the next move of God being something that will tickle the flesh. They are far removed from the message of there being a cross to be borne by every disciple of Christ, that through much tribulation we must enter the kingdom of God, and all who live righteous in Christ Yahshua will suffer persecution.

The church wants the presence of the Spirit, an anointing of power, without the disciple’s cross. Yet the anointing power of Christ is only released through vessels that have been broken. The method and conditions of this breaking process are far removed from the carnival atmosphere observed at Lakeland. God’s true disciples are suffering alone, outside the camp, bearing many reproaches, suffering many pains and sorrows and loss. They are not standing in massive crowds as the emotional atmosphere is hyped by loud music and theatrical charades occurring upon the stage. Todd Bentley can hawk his CD titled “Marinating – Pickling in God’s Presence,” but God’s true disciples will find that the closest contact they will ever have with the presence of God is when they take up the cross and follow the Lamb wherever He leads.

Last night I looked at some of the dozens of photos on Morningstar’s website showing scenes from the “revival” services being conducted there nightly since some of the youth came back from the Florida Outpouring. Photo after photo showed people experiencing fits of laughter, or manifesting some animated action as they were evidently “pickling in God’s presence.” I began to ask the Lord how such a thing could happen. How could so many believers be caught up in a movement that is foreign to the experience of the first apostles and the early church? How could so many Christians believe that the birth pangs that precede the return of Christ will be fulfilled in soulish and fleshly manifestations when the Scriptures declare repeatedly that the birth pangs are not pleasant at all. The birth pangs preceding Christ’s return are described as famine, earthquake, wars, plagues and such things as will make men’s hearts fail them for fear. The birth pangs will be terrible. They will not be something you can package and market and invite people to come stay in your high rise hotel while they enjoy the manifestations of these birth pangs.

As I contemplated how so many could be caught up in error, the Spirit reminded me of a book written in 1841 by John Mackay. It is titled Extraordinary Popular Delusions and the Madness of Crowds. Following are two quotes from the book.

“Men, it has been well said, think in herds; it will be seen that they go mad in herds, while they only recover their senses slowly, and one by one!”
“Of all the offspring of Time, Error is the most ancient, and is so old and familiar an acquaintance, that Truth, when discovered, comes upon most of us like an intruder, and meets the intruder’s welcome.”
There are perhaps no people on earth more susceptible to the foibles of rushing after some new movement, being absorbed by some rising personality, or entertaining ridiculous fable, than Christians. I am not being unkind to say these things, for this is also the witness of Scripture.

Isaiah 42:19-20
Who is blind but My servant, or so deaf as My messenger whom I send? Who is so blind as he that is at peace with Me, or so blind as the servant of Yahweh? You have seen many things, but you do not observe them; Your ears are open, but none hears.

II Timothy 4:3-4
For the time will come when they will not endure sound doctrine; but wanting to have their ears tickled, they will accumulate for themselves teachers in accordance to their own desires; and will turn away their ears from the truth, and will turn aside to myths.

We live in that day and hour of which the apostle prophesied. Sound doctrine is not endured, but legions will attend to the antics of an immoral, obscenely tattooed, brash, money-hungry carnival barker whose doctrines are so askew that they make the words “myths and fables” sound attractive. How many of these same ones will take up their cross and follow Christ WHEREVER He would lead them? Will they follow Him to a place aside from the thronging masses where sorrow and suffering are one’s chief companions?

The days ahead will decide the matter for many. In His mercy Yahshua is coming with a rod of correction. He will cast His church into deep suffering. Many will fall away, but a remnant will realize the Lord is beckoning to them to follow, and they will endure and be purified. May many have the grace to stand in that day.

A Personal Request: Today the software arrived that I will use to begin creating some videos to post to the Internet. These videos will share many of the signs of judgment that the Lord has been giving to warn His people of the days upon us. The videos will also share “sound doctrine,” including the message of the disciple’s cross and an end to all personal initiative.

I need much help in creating these videos, for I do not consider myself adequate to know how to proceed, or to have the capacity to set forth something that will set the captives free and bring those dwelling in darkness into the light of truth. Would you please pray and ask for Yahweh’s anointing upon this servant as I labor to produce these videos. Pray that they will speak forth the mind of the Father, and reveal His heart. Pray also that God would match up the message with the hearer, that the message might go forth and accomplish much advance for the kingdom of God.